We joined the Ferrari Owners’ Club of Great Britain for their 50th Anniversary National Event at Danesfield House. What followed was a day of incredible cars in beautiful surroundings as we celebrated decades of Ferrari ownership in the UK!

Home road From Classics to Colour 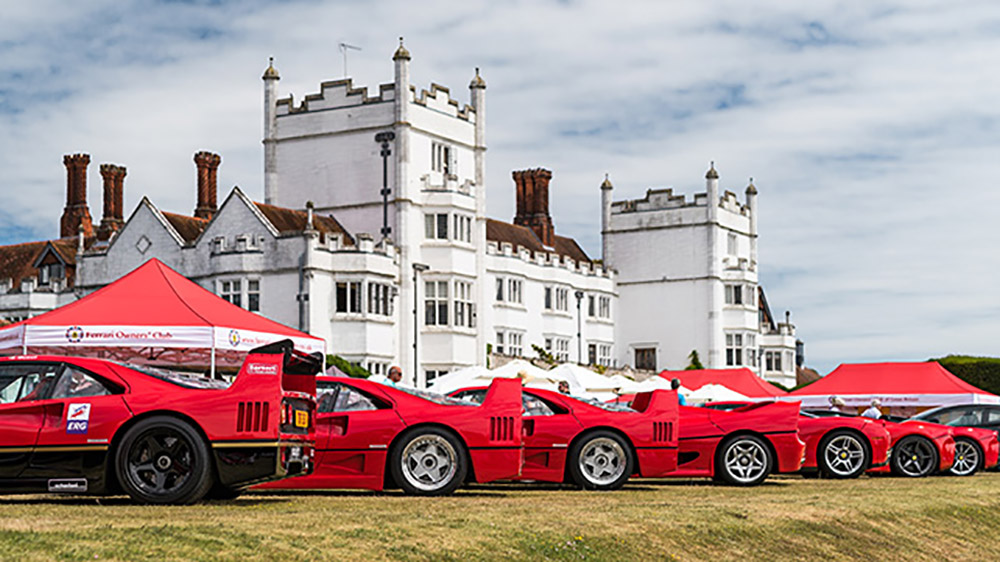 On the 8th of July, there was no single greater display of Ferrari achievements in the United Kingdom than at Danesfield House in Marlow.

Uncountable numbers of Ferrari supercars descended in droves on the country house and filled not only every parking spot available at the luxury hotel and spa but many overflow carparks beyond. What, for many other events, would be purely functional spaces were transformed into supercar galleries enthusiasts the world over would be eager to visit. All this before we even set foot on the lawn on which the garden party, and an all-eras display of world-famous Ferrari supercars, was to be held.

What greeted us then was a stunning array of decades of “The Prancing Horse.” Beginning as was only proper, with the classics, we soon found ourselves immersed in the history and innovations of all of the incredible cars sat in neat rows before the white-brick of Danesfield House.

The first to catch our eye in the sea of Ferrari Red was, in fact, not red at all. Sitting beside the merciful shade of the trees was a 1961 250 GTE Series 1 in a vibrant blue. Originally bought new in Geneva, we soon learned the first was paired with a second 1961 250 GTE which was instead a UK-original car in right-hand drive. Having received a light restoration the 1990s, this second model was in a condition to be used on a regular occasion; even going so far as to be taken out for the daily commute! And while being driven on the road the second 250 GTE continues to ride on Pirelli Cinturato tyres, which remain in supply as part of our Collezione Classic range and are the original fitment the Ferrari left the factory with in the 1960s.

As the event truly came to life, and the sun crawled across a sky marred only by occasional cloud, it was clear the atmosphere at Danesfield House was one of celebration. The lawn was ringed with pop-up stalls of all kinds, from hyper-detailed Ferrari model cars to a gelato stand which transformed from being wildly popular to near compulsory as the temperature continued to climb throughout the day.

The next landmark car we happened across as we effortlessly stepped from one jaw-dropping feat of automotive engineering to the next was the inimitable Ferrari F40. This spartan expression of pure power served as the model for Ferrari supercar performance from its launch day forward.

As a band played on the main stage, members of the Club talked all things Ferrari over ice-cold drinks whilst enjoying the surroundings which, while beautiful in their own right, had been elevated by the presence of a truly remarkable collection. This display of supercars went beyond what was a simply fantastic gallery of Ferrari masterpieces by offering a unique opportunity to experience decades of Ferrari history live and in person.

The culmination of this history was represented by the brand new Ferrari 488 GTB. This contemporary example of unparalleled performance acknowledges and symbolises what went before with a return to the classic Ferrari model designation by signifying the supercar’s engine unitary displacement directly within its name. So too did the 488 GTB take a place in the history of P Zero, as started by the Ferrari F40, by becoming one of the first luxury cars to receive a fitment for our new colour range.

The mix of classic style and explosive modern performance which came together at Danesfield House on a singularly scorching day in July perfectly reflected what it means to appreciate the world of Ferrari. Fifty years of ownership in Great Britain aligned with seventy years of Ferrari history celebrated with a garden party, barbeque and evening drinks on a summer’s day. Now that’s the perfect fit!