Ferraris in the lounge:
the car becomes an interior design item

For Lugano-based Kessel, the Ferrari brand is almost a religion and the car is at the centre of everything. In the home too

Home road Ferraris in the lounge:
the car becomes an interior design item

Ferraris in the lounge:
the car becomes an interior design item

This story cannot be told without going back in time. To when the Swiss citizen Loris Kessel gave up his racing seat as a Formula 1 driver and decided to open a business in his own name in Lugano. Starting from very little, he succeeded in building up an activity which today provides jobs for some 100 people and which works closely with the world’s main automotive brands.

When Loris died, the reins were taken up by his son Ronnie and today Kessel sells luxury and sports cars as an official dealership, is an active motorsport participant with its own race team and restores extremely valuable historical cars. A life, indeed several lives, dedicated entirely to a passion for cars. This explains how the desire was born to bring these very same cars into the interiors of houses. Today this remarkable department is called Kessel Art and it creates design items inspired by cars, notably classic cars, be they street or racing models. 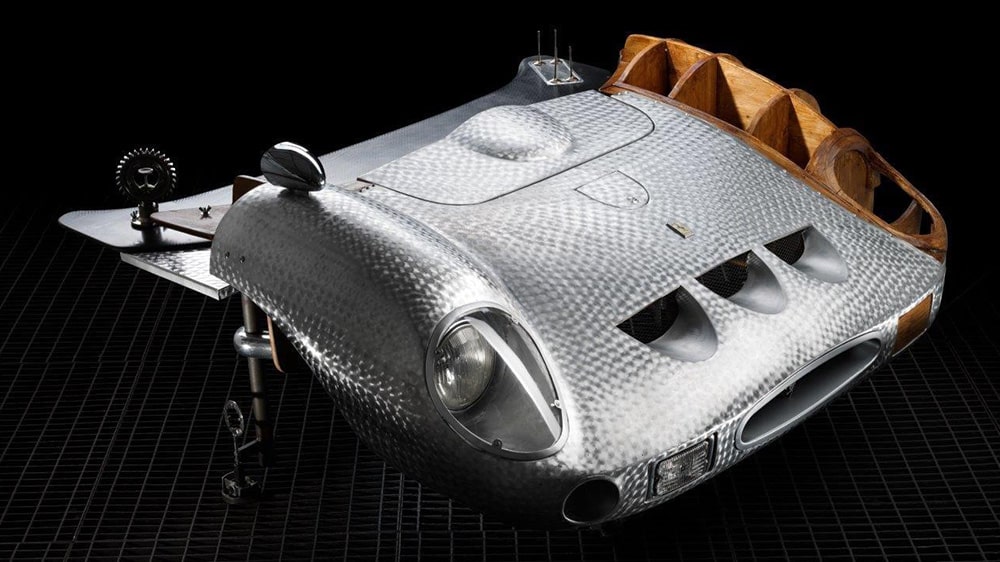 This, then, is the imposing framework from which can emerge an exact reproduction of the nosepiece of the Ferrari 312B, the car which carried Clay Regazzoni to victory in the 1970 Italian GP. Or the perfect reproduction of the radiator grille of the Lancia Aurelia B24 America which has become a luxury minibar. In the same way, too, as the writing desk in wood and aluminium which is finished off in the form of the front end of a Ferrari 250 GTO with its three unmistakable air intakes. Or the trinket tray to be placed in a house hallway which is the exact copy of the front of the Ferrari 275 GTS. These are all precise reproductions of the original parts. In fact, on many occasions they are created after the Kessel Classic department has finished restoring the very same vehicles. “Those pieces could be fitted at any time onto the actual cars and you would not be able to notice any difference” explains Ronnie Kessel.

The idea was launched almost by chance thanks to the imagination and to the artistic expertise of the panel beater at Kessel’s. His was an ancient craft, handed on from father to son, and by then in its third generation. During the Fifties and Sixties replacement bodywork parts such as we know them today did not exist: they had to be made by hand, involving dozens of hours of work and thousands of blows with a particular sort of little hammer, centimetre after centimetre, fold after fold, until the metal, shaped from a flat panel, took on the curves which the designer had imagined for that car. This is the same work which the Kessel Art department carries out today, creating unique items for those lovers of four wheels who cannot tear themselves away from their own favourite pastime even when they are sitting comfortably in their lounges.