Winning, beautiful, legendary: Ducati celebrates the motorbike that everyone has dreamed of

Who knows if Massimo Tamburini had guessed that, while he outlined a sketch of what was to become the 916, he was bringing to life a legend on two wheels. Now, some 25 years later, the 916 is the motorbike that everyone knows, the Ducati par excellence, which has gifted moments of glory to the manufacturer based in Borgo Panigale and has contributed to consecrating Tamburini as the Michelangelo of the motorcycle. 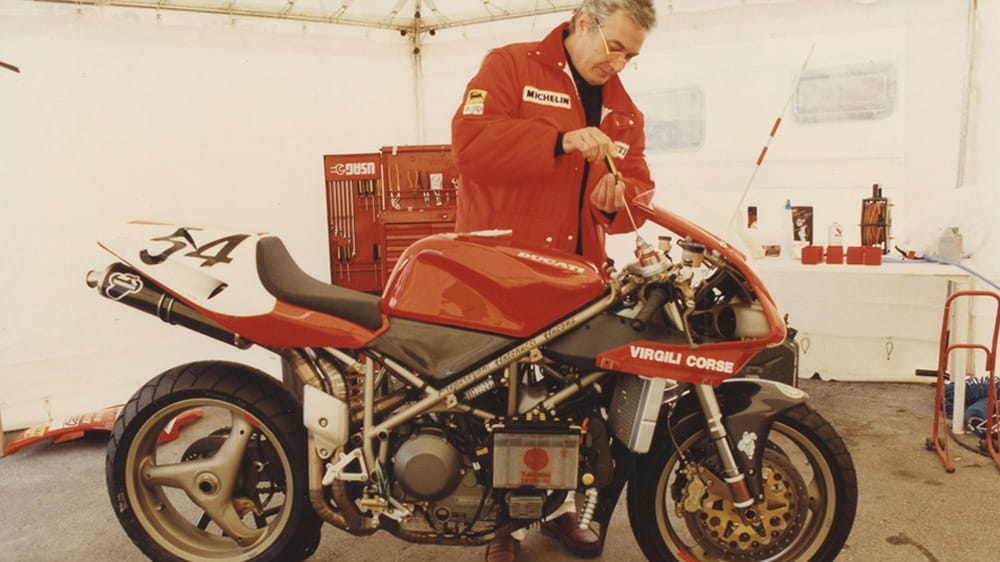 The design of the 916 began with a view to improving the competitive potential of the Ducati 851/888, to continue to take home, year after year, the first place at the World Superbike Championship. The promise has indeed been kept because the 916 SBK made a stand from its début race, going on to accumulate victories in 120 races, clinching 8 Manufacturers titles and 6 drivers titles.

The face associated with the 916 is that of the English driver, Carl Fogarty: the Fogarty-916 pair is still one of the most successful duos in the history of Ducati Superbike to this day. Fogarty was four times world Superbike champion – three out of four with the 916, the last with the 996, its evolution – and has won so many races that he has been nicknamed “The King”.

What was so special about his “queen” to become the dream of all motorcycle riders in the world? The 916 was created to give its best between the kerbs: no side drains for more efficient aerodynamics, reduced mass (nevertheless remaining mighty, something which - together with the quality of the suspension and the rigidity of the chassis - guaranteed outstanding cornering stability), a single-sided swingarm to facilitate the replacement of the rear wheel, an evolution of the water-cooled two-cylinder Desmoquattro engine.

The 916 for road use was capable of 114 HP and a top speed of 255 km/h, whereas the more powerful SP was supplemented with some components sourced from the models racing in the world SBK championship. Moreover, the dynamic behaviour of the 916 could be modified according to the characteristics of the circuit or the needs of the individual rider, thanks to the adjustable setting of the steering angle.

How do you make your mark in history? By showing the world something that’s never been seen before: this is exactly what has made the 916 an immortal icon, capable of immediately astounding thanks to its innovative design, of obtaining outstanding commercial success and of winning the Motorbike of the year award in 1994 in all categories. The 916 has rewritten the aesthetic styling canons of the superbike and has introduced those stylistic traits which we still see today on (beautiful) motorbikes; these include undertail exhaust, simple and elegant silhouettes, or the double teardrop headlight. These features are integrated with the typical structure of the Ducati, with its tubular steel trellis frame.

THE STORY GOES ON

In 1992, in partnership with Pirelli, work began on fine tuning the 916, for which the Pirelli Dragon were chosen: zero-degree coiled steel belted tyres, original equipment with absolutely innovative technological contents for its time, designed to be fitted on an equally innovative superbike. The partnership between Ducati and Pirelli continues to thrive today, and it has given rise to a new milestone in the history of Ducati: to celebrate the 25th anniversary of the 916, the Panigale V4 25° Anniversario 916 has been launched, a limited edition fitted with Pirelli Diablo tyres, to allow nostalgic fans to relive the legend of the symbolic motorbike of the Nineties with the best technology of 2019.