To prevent this phenomenon you need tyres that drains the water with an innovative tread. As those of the Pirelli P Zero line

Bad weather is one of the most frequent dangers that drivers have to face. The most frequent of these is most definitely rain. Tyres play an essential role in ensuring that we can drive safely in wet conditions, and experience in the world of motorsports has provided engineers with a wealth of data to help them design these tyres, both in the selection of materials and in order to find the tread pattern that provides the best grip on wet roads.
The phenomenon that has the most adverse effect on stability on wet tarmac is called “aquaplaning”, a term that refers to when a tyre loses contact with the road surface due to a cushion of water that forms in the longest and deepest puddles on the road. Under such conditions, the car “planes” across the water and reduces the driver’s control over the vehicle.
To combat this phenomenon, tyres need to be able to move water out of the puddle in order to remain in contact with the road. To do this, the tread of the tyre has a particular pattern of grooves that run lengthwise around the tyre and a series of other grooves oriented across the tyre to drain the water out and away from where the tyre comes into contact with the road. The higher the speed, the more difficult it is for the tyre to push away all of the water in order to remain in contact with the road surface. In addition, wide tyres, such as those of the Pirelli P Zero line, which ensure greater grip in dry conditions, are actually more likely to experience aquaplaning than narrower tyres, because they have to drain off a greater amount of water in order to remain in contact with the tarmac.
This is why cars are often able to mount different sizes of tyre, so that they can use winter tyres with a smaller contact patch. Just as Formula 1® cars have to change tyres when the track gets wet, our own cars, too, need to adapt to the changing of seasons. Whenever possible, winter tyres, such as those of the Pirelli Winter line, are of a different size compared to summer tyres, with a narrower tread and higher shoulder. More importantly, their tread patterns are drastically different, with much deeper grooves in order to drain off more water, given that roads tend to be wetter in the winter months. 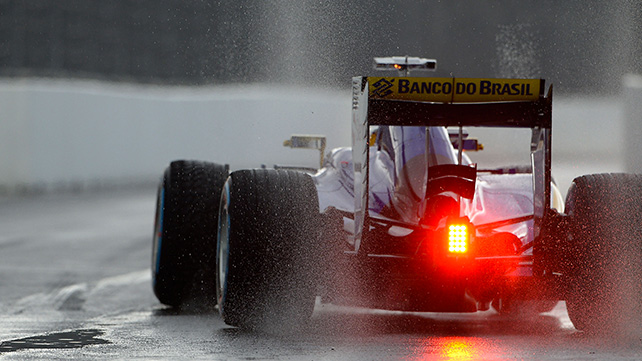 “Slipping” in a puddle, every driver’s worst nightmare

Tread patterns are designed to minimise aquaplaning. Simulators can help designers a great deal, but tests on wet roads are essential to creating the most effective tread patterns. In the same way as the full-wet tyres for Formula 1® are to be tested on the Paul Ricard Circuit in Le Castellet, France, before the start of the 2016 season in order to test a range of compounds and tread patterns, Pirelli’s tyres for production vehicles are always tested at the Pirelli test track in Vizzola Ticino, a facility dedicated entirely to testing and that features a track that is kept constantly and uniformly wet in order to take measurements under the same conditions lap after lap. The Vizzola facility also has a special surface dedicated specifically to aquaplaning where vehicles run through the water at speeds high enough to cause aquaplaning. Before going to production, all Pirelli tyres—including the P Zero, Scorpion and Winter lines—have been tested extensively at the Vizzola track in order to find the tread pattern best suited to combatting aquaplaning.

Constant development: tests of both road and F1® tyres

So, once again, the wealth of data gathered during Formula 1® testing, with the involvement of Ferrari, Red Bull and McLaren, will help put the finishing touches on the new full-wet tyre for the upcoming Formula 1® season. At the same time, this invaluable data will soon also migrate down to production tyres.

But it’s not enough for Pirelli tyres to be safe in wet conditions. They must also ensure the highest levels of performance that only competitive racing can provide, levels like the ones we saw during the qualifying rounds at the 2014 China GP when Valtteri Bottas, with Team Williams, achieved the incredible speed of 316 km/h. But this speed was not incredible for the speed itself, as it happened at the end of the main straight—the longest of the entire 2014 season at over kilometre long—but because it was posted on a wet track.
The Finnish driver reached this exceptional speed on Pirelli’s Cinturato Green intermediate tyres in wet conditions and with practically zero visibility due to the water being kicked up by the other cars. These tyres are, like all F1® tyres, very wide, but still highly effective at preventing aquaplaning.
And these aren’t even the Pirelli tyres designed for the worst wet conditions. With a tread depth of 2.5mm, at top speed the Cinturato Green intermediate tyre pushes out 25 litres of water per second per tyre. That’s 100 litres per second for the whole car, all while maintaining full control under both acceleration and braking, as Bottas so adeptly proved. For the sake of comparison, the Cinturato Blue full-wet tyre, designed for extremely wet conditions, pushes out 65 litres of water per second per tyre at top speed, for a total of 260 litres.

Cinturato All Season: the worry-free tyres