Pirelli was the presenting sponsor of the unique exhibit “The Story of a Dream”, organized by Pagani at Grand Central, in New York, to celebrate the 20th anniversary of the Zonda

Home road Daring to dream
with Pagani and Pirelli

“Pagani. The Story of a Dream” offered New Yorkers and North American car enthusiasts a remarkable opportunity to see some of the world’s rarest hypercars. The Pagani Zonda Collection – five of the most remarkable Italian Hypercars ever made – were on display to the public within the grandeur of Vanderbilt Hall in Grand Central Terminal. More than 100,000 visitors viewed the exhibit. 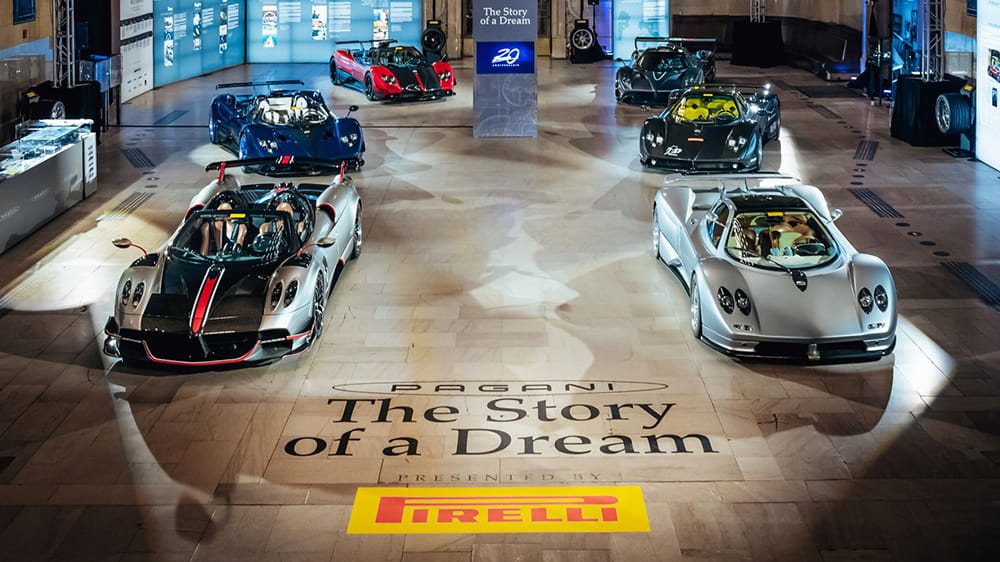 Also on display, the very first chassis ever released by Pagani Automobili: Zonda 001, which earlier this year was meticulously reconstructed using original materials as part of Pagani’s Rinascimento Program, was also on display. Finally, the latest creation from Pagani, which was officially unveiled during this year’s Monterey Car Week – the Pagani Huayra Roadster BC – rounded out the exhibition.

With 750,000 people passing through Grand Central each day, the globally-recognized transportation hub made for the perfect venue for this display, according to Horacio Pagani.

“Grand Central Terminal is an iconic location where many immigrants arrived and began their American Dream. As there are significant parallels between their journeys and mine, I am honored to tell my story here,” said Pagani. “I hope New York City residents and visitors passing though, will enjoy seeing my work and learning about how the commitment to sacrifice, hard work and passion can help anyone realize their own dream.”

A proud partner of Pagani Automobili since 2008, Pirelli had the distinct honor to present “Pagani. The Story of a Dream.”

“Working with Pagani is a real pleasure for us,” said Marco Crola, Chairman and Chief Executive Officer Pirelli North America, Inc. “Every day, with his dream cars, Horacio presents us with highly advanced challenges and pushes us to achieve ever higher technological goals. So, I’d like to thank Horacio for not only having us as the presenting sponsor of this incredible event, but also for challenging us to reach the peak every day.”

The relationship between Pagani and Pirelli began a decade ago and has since shared a number of important milestones: from the first record beaten in 2010 with a Pagani Zonda R on Pirelli P Zero at the Nürburgring, the iconic German track, to the development of the Formula One modeling process used to create the P Zero Trofeo R tires for the new Huayra BC. Today, Pirelli develops P Zero tires specifically for each vehicle that departs the Pagani workshop of San Cesario sul Panaro, following its Perfect Fit Strategy.

From dream to reality – The story of Grand Central Terminal