Home road Ballot 3/8 LC, the history of an era-defining car

When visitors stop by they linger in front of the car for a few seconds. An original poster from when the vehicle was first launched is on display next to it, though it has faded over the years. The Ballot 3/8 LC is closely associated with Italy’s history - its owner, Alexander Schaufler, proudly tells us “the car in front of you right now competed in and won the first Gran Premio d’Italia in 1921”.

In 1921 the Ballot 3/8 LC was already a cutting-edge champion car; its success was partly - and largely - down to its Pirelli tyres. “The two drivers, Goux and Chassagne, won the Gran Premio without changing tyres. Having reliable tyres made all the difference during that race,” explains Schaufler.

The Ballot 3/8 LC’s current owner has a very unique collection of historical cars. “I first became interested  in 1990, and that interest never faded - I keep all my cars in a warehouse in Vienna. I’m very attached to this car especially - a lot of people have contacted me to try to buy it, but I’m holding onto it and taking care of it.” 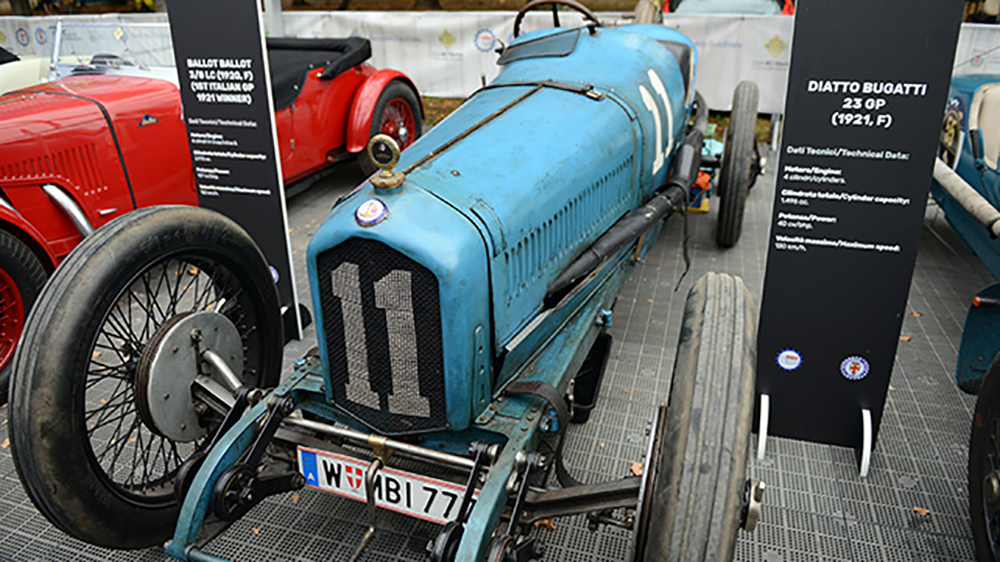 On its 110th anniversary of Motorsport participation, commemorating the Ballot 3/8 LC is something Pirelli is proud to do. The car’s pale blue sides make it feel like it’s still being used, with everything left intact. The number eleven is painted on the side of the car. “Vehicles like this don’t take a lot of upkeep,” explains Schaufler. “This is partly because there isn’t a lot of wiring in the car, since it’s from the 1920s. Of course, though, this an historic car which competed in the Indianapolis 500 and the French Grand Prix. It was exhibited in prestigious sites like the Retromobile in Paris, 1000miglia storica, Villa d’Este and Goodwood.”

The collector’s market is growing and is very profitable - collectors run the risk of their passion becoming a mere business. Not for Schauler, thought: “some buyers in Asia - and even some Sheikhs - buy cars on a whim, but I’m really passionate about them. I want to know everything about their history.” At the Gran Premio di Monza, the Ballot 3/8 LC led the historic car procession. “Sticchi Damiani was on board carrying the Italian flag - it was very moving.”

Schauler seems to know what he wants in the future already: “My dream is to have an Isotta Fraschini Corsa. When it comes to vehicles and to car manufacturers, Italy has a very important and highly prestigious tradition.” He’s wary of letting slip how many cars he has though: “I never talk about that, it’s a secret”.

Meanwhile, on the other side of the cord separating visitors from the Ballot 3/8 LC, people keep taking photos. The younger ones are struck by how thick the wheels are - or rather, how high and thin they are, as was typical for cars at that time. The car still captivates people with its impressive history. “It’s really an amazing car - you can’t put a price on this kind of thing.”

Partners in Excellence: Pirelli and Bentley

Porsche to the limit

The Jaguar roars once more