From the North Cape to the Lofoten Mountains - a trip can hardly be more picturesque. Especially as the journey is being undertaken in a Porsche 944, the famous globetrotter, and a Porsche Cayman. This trip is also a great challenge for the tyres. 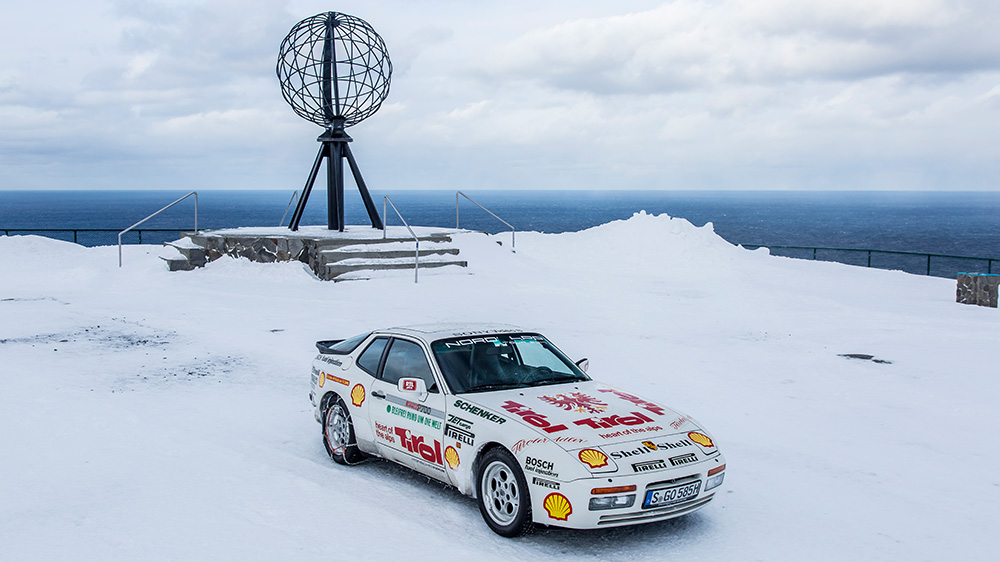 Well, postcard romanticism looks different. Finally arrived at the North Cape, the wind ruthlessly whips over the rocky ground. A souvenir photo with winter fairy tales in front of a blue sky and the famous steel globe? No way! Like small shot-balls, the small soft hail pellets crackle on the face. A staccato of needlesticks maltreats the cold-frozen skin. “Such weather is normal here," smiles the former Porsche test engineer Dieter Röscheisen, who fought his way through to these rocks 30 years ago with two Porsche 959s in a winter test.

Even three decades later, the road through Northern Scandinavia is still no cakewalk. Especially since the globetrotter Porsche 944, with which the Austrian Gerhard Plattner drove around the world 31 years ago, is an automotive treasure that should not be parked in a piles of snow underneath which a stone possibly hides. The fact that the "Tyrolean eagle", that´s the name of the white vehicle, which with its many stickers looks like a rolling advertising pillar, is constructed according to the transaxle principle - i. e. engine at the front, transmission at the rear - does not make things any easier for the driver on a snow-covered road.

The aged car from Zuffenhausen still has a lot of temperament and shows a perfectly shaped pirouette with the rear axle, if you only exaggerate the accelerator pedal a little when cornering. It helps if the tyres are able to cope with these almost unreal conditions. Grip can´t be replaced by anything else on snow and ice except for more grip. After all, the contact patch of an average tyre has only the surface of a man's palm. A quick glance at the tyres calms: As with the original ride, the car is equipped with tyres from Pirelli, this time Pirelli Winter Sottozero. 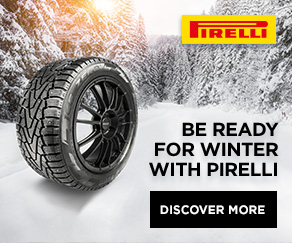 On the way to Skarsvåg, the world's northernmost fishing village: the landscape is hilly and the road curvy. Without traction only snow chains remained. Really a kind of a less tempting alternative. But everything goes smoothly and Dieter Röscheisen tells of a meeting with an Eskimo 30 years ago who received the price (420,000 D-Mark) and the hp (450) of the Porsche 959 with an unbelieving frowning and then considered how many sledge dogs one can buy for this sum. Time seems to have stood still here. The town sign is still hanging on the same wooden hut as before, and the fishing boats are swinging on the lively water like they used to.

Regarding winter tyres times and requirements have changed fundamentally. In the 1980s, the motto was "as narrow and deep-tread as possible", but today the specifications of tyre developers are much more complex. At that time, the car driver accepted that winter tyres were louder than summer tyres; today, a loud tyre rolling noise is a knockout criterion. For this reason, a significant part of the development also feeds into acoustics. With the spread of electro-mobility, this aspect will become even more important in the future. The structure and functionality of the so called "black gold" is also completely different, and that is why wide tyres are often the better alternative, by now. Of course, the rolling resistance should be as low as possible. This objective does not make it easier to strive for road grip.

However, the driving dynamics equation of tyre developers shows more than just a conflict of objectives. Today, as it was 30 years ago, mixed conditions, i. e. changing between snow-covered road, ice and asphalt, represent the greatest challenge. Two tyres on ice, two on tarmac. Exciting idea, which one could gladly do without, but which becomes reality more than once and which was also the reason why Porsche sent two 959s to the North Cape at that time. “The Swedes thought we were completely crazy at the time," says Dieter Röscheisen. Two of the sports cars completed 2,306 kilometres within two days - the slightly higher comfort version as a snow plough for the lowered one behind it. In the car the developers had sleeping bags, provisions, a flare gun and wood for the fire.

The tour was successful and the control systems of the sports car's all-wheel drive system could be adapted and perfected to all possible road conditions. At that time, the feeling of the test drivers was the deciding factor. This hasn't changed much until today, even though a lot of the basic work can be done by simulations and the Peiseler wheel, which was attached to every vehicle, has now become obsolete. But how good a winter tyre really is can be seen on the handling courses of frozen lakes in northern Sweden, where the engineers have been setting up their winter camps for over 30 years.

The result of the fiddling work can be experienced - in the full sense of the word - on the way to Lofoten, another intermediate destination on the way to Arjeplog. The Porsche Cayman also rolls on Pirelli Sottozero and is fun every meter. The mid-engine athlete remains controllable at every corner. Small swings of the rear are compensate by an expert hand with a quick counter-steering, which with the help of the tyres also leads directly to the desired success.

On the archipelago the conditions change little. The picturesque landscape of Lofoten is reflected in the windows of the vehicles. Like icing sugar, the snow lies above the high mountains and the narrow, winding roads that connect the small fishing villages. The white splendour just increases the fun and every stop offers a postcard worthy motif. At the port of Heimøya, the ships swing slowly, while the fishermen hang up their catch on scaffolding standing around in the countryside like a gable.

We continue to Sakrisøya on crossed roads, where the dark asphalt now shines through. By the way, there are magnificent fishburgers there.

The tyres offers reliable performance in all conditions on the unique road tour. The special slat tread pattern performs its job perfectly and drills itself literally into the snow. This can be expected from modern tyres. Pirelli has teamed up with Porsche to produce modern tyres with classic tread outfits for a lot of older models such as the Porsche Turbo (internal code 930) so that vintage cars do not breathe out their precious car life in the ditch or on a tree trunk. This is particularly important for vehicles of that time, which did not have any control systems on board. The tyres for the Porsche super sports car classics are part of the so-called Pirelli Collezione. With this portfolio, Pirelli is responding to the growing demand from owners of prestigious vintage and youngtimers for modern tyres with a classic look. These tailor-made tyres combine the special aesthetics of past decades with the latest technology and the latest findings from motorsport.

Those new classic tyres all have the N-certification on the side wall, which identifies them as tyres with special Porsche approval. Current tyre recommendations for Porsche models can be found on the web at the following address.

Peter Fill:
when control is everything