Last weekend, Blenheim Palace in Oxfordshire, England was the glorious setting for Salon Privé, a motor show with a difference. If ‘Downton Abbey’ were to feature supercars, the result would look something like this…

Taking place on the lawns and in the courtyards of the grand 18th century country house, the event oozes prestige, with many of the leading supercar brands displaying their latest models alongside private owners of classics from the past to the modern day. The atmosphere is informal yet subtly elegant, like a perfectly tailored British blazer.

Most of all though, Salon Privé is a perfect fit for Pirelli and its commitment to the prestige sector. Many of the supercars on display were fitted with Pirelli P Zero tyres as original equipment, including the star of the show: the Lamborghini Centenario, a limited edition model built to honour the 100th birthday of company founder Ferruccio Lamborghini. Every Lamborghini ever made at the famous Sant’Agata factory has rolled out of it wearing Pirelli tyres, and there has even been a Pirelli special edition Aventador in the past.

But the latest Centenario is something else. With just 40 examples being produced (20 coupes and 20 roadsters), top speed is said to be north of 350kph, while the 0-100kph sprint is dispatched in a tooth-dislodging 2.8 seconds: one of the fastest Lamborghinis in history.

It was another dramatic and very special car from Italy that was named as the official ‘Best in Show’ as part of the Pirelli Prestige & Performance Competition. Being staged for the second year, this modern take on a Concours d’Elegance featured 80 privately-owned cars spanning eight award categories. 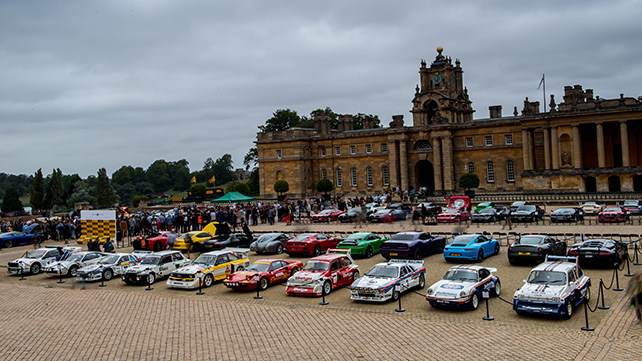 A panel of automotive experts, including representatives from Pirelli, judged each of the participating cars – all built within the last 40 years – and picked their winners.

The classes covered a wide range of different machines, including Group B rallying beasts, where the iconic Lancia 037 – which used Pirelli low-profile tyres back when these were still and innovation – took top honours. Other winners included a Porsche 911 RSR of 1976 vintage and a Jaguar XJ220 from 1992, while there were also awards dedicated to two absolute classics: the Porsche 911 Turbo and Lamborghini Diablo. Like Pirelli, these are cars that have shaped automotive history, featured on posters adorning countless teenage bedroom walls. And Pirelli tyres are still seen on the latest generations of Porsche now.

From the class winners, the overall Pirelli Award winner was chosen: the Pagani Zonda 760RS, a car so special that even Formula 1 champion Lewis Hamilton has one (although his is a bespoke ‘LH’ edition. And it’s very purple).

The judges weren’t the only ones able to pick their favourites though. Salon Privé is designed to be an exclusive event, but it opened its doors to the public for the Pirelli Prestige & Performance Competition, sponsored by Pirelli for the second consecutive year. This allowed people to get up close to the iconic cars and share the fun, as part of a great day out for all the family. Visitors were able to cast a vote for their favourite exhibiting car, and the 2016 Ferrari F12 TDF was declared the People’s Choice.

Running the new Pirelli P Zero Corsa, the 769-horsepower TDF is probably the purest evocation of Ferrari currently on sale, complete with innovations such as active aerodynamics. But in actual fact, the latest derivative of the F12 is also a tribute to a much older Ferrari, named after the (automotive) Tour de France.

Only 77 of those iconic cars were built in the mid to late 1950s, equipped with Pirelli Cinturato tyres (at the time, Pirelli’s Cinturato ad campaign featured Juan Manuel Fangio: the legendary race ace who Lewis Hamilton described as ‘the original gangster’).

But there was no call for any gangster-like behaviour at Blenheim, because that really wouldn’t be very British. Just tea and cakes on the lawn instead…