After days of mystery, among stolen clicks and videos with the the rumble of the engine, the new Ducati Panigale V4 Superbike was officially presented to the Ducati World Premiere on November 6th and today during the press preview at the International Expo Cycle and Motorcycle. 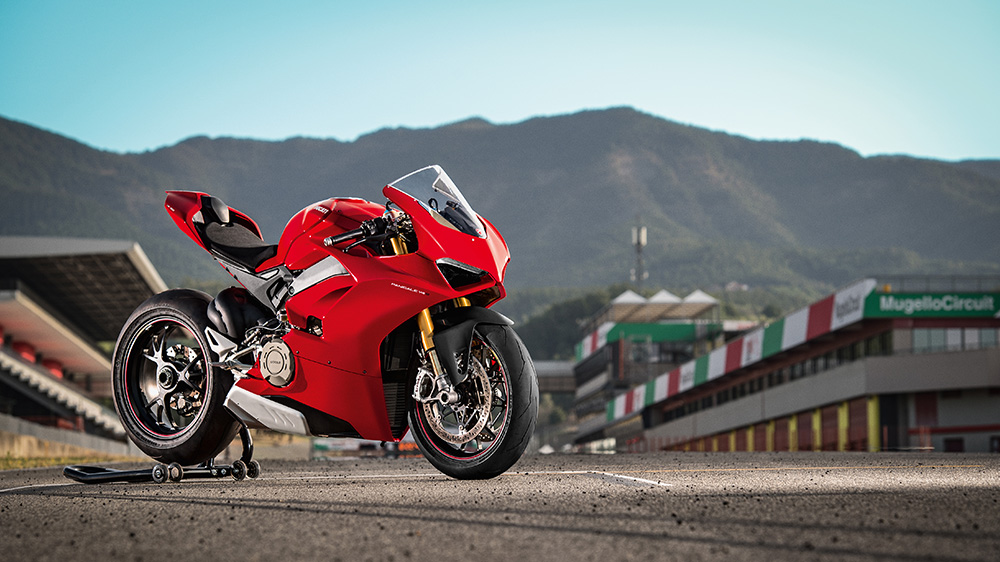 That’s it, the partnership between the two brands is one of the core strengths for both. we spoke with an enthousiastic Salvatore Pennisi, director of the Testing Department at the Pirelli Tire Motorcycle Business Unit: "The collaboration between Ducati and Pirelli has always been very strong, proactive and based on a very balanced realtionship; true partners with a comproved business friendship. In the last few decades we have layed the way for very important milestones in the

. It all started with the joint setup for the Ducati 916. Since 1992, Ducati and Pirelli work together for the development of the 916, a vehicle that for the time was really futuristic, both for design and from the point of view of its technological content. Together we have marked a new starting point for what would then be the new way to conceive a motorcycle from that moment onwards. " We talk about topical moments, moments that have clearly made the history of motorcycling, and between these moments there is the birth of the Honda Rc 30 among the Japanese’s and the Ducati 916 among the Europeans/Italians. "And Pirelli was there, for both. In particular, with the 916, the tires were the famous and revolutionary Dragon Pirelli, a zero-grade spiral-woven belt, a first-rate futuristic solution for a Ducati first gear” says Pennisi. This synergy led to a global and total partnership agreement. Today, Pirelli supplies 100% of the first gear to Ducati, every bike leaving from Borgo Panigale wears Pirelli. Pennisi tells us how easy it is to find stimuli when working on such projects, a clear indicator of the pride felt when products of such value are developed: "Finding stimuli is easy, while being informed and made part of a project that, in its first vagaries was of absolute secrecy, to be able to live a historic moment such as the time when Ducati produced its first true 4-cylinder series; that was a moment of great pride. Pirelli has wide shoulders and could definitely face this challenge. You have the feeling of being part of an elite crew, a department that had the goal to amaze the motorcycle world. It is also an opportunity to grow as a professionale. These are the opportunities that allow you to tie the technical expectations to something more romantic connected to the feeling of being part of a complex machine, serving a bigger picture. " Pennisi, together with two senior collaborators and in constant dialogue with Alessandro Valia, Ducati's chief diver, plus the entire staff of the Pirelli Testing team, have returned the final result of the new Diablo Supercorsa.

A 100% Pirelli product, where you can see all the differences from the past products and where the technological features are absolutely marked: "Let's say that the set-up proposed to Ducati started from the study of a new measure on the back. The 200/60-17 has has been built gathering all the experiences we have gained during the development of the Superbike World Championship tires. We have not simply adapted them to road use, but reinterpreted for this new use, translating what we had learned from sports activities. It was a fantastic experience, and what we used to develop this tire has supported us back onto the World Championship products development too. Today we have a whole new dimension, with a engineering study of those that were the static and dynamic tire profiles that are now absolutely a reference. We've got a calibrated mix of elements, which has also been able to profit of what has been the industrial development of new and extremely effective construction processes. So, basically, refined processes, absolutely innovative geometries and avant-garde materials both in the casing and in the mix level. " Satisfaction is obviously total, and Pennisi also tells it in numerical terms. When asked if and how satisfied he is with the end result, he does not hesitate to say that "1 to 10, we’d give satisfaction a good 12 an more."

How bikers got a new image

A tyre’s role
in the future of mobility