The first P Zero Experience event in Italy was a celebration of fast driving enthusiasm. On a unique stage: the Mugello racing track

From the Tuscany hills to the German forests: for all those people who can never get enough of the track and want to relive a full day of petrol and adrenaline like the ones spent at the Mugello Circuit, Pirelli gives fans the opportunity to participate at the first P ZERO™ Experience in Germany at the legendary Hockenheimring, on October 21st (sign up here). A one-of-a-kind event for enthusiasts who love driving on track, where passion is measured in liters of fuel, 3.370 to be exact were the ones consumed throughout the first Italian stage, succesfully repeated last June at the Mugello Circuit. This story will make you relive those two days spent together.

How can you gauge the love of cars on a racing weekend? For instance, 380 litres of water drunk over two days point to the fact that the weather was balmy. Counting 150 top cars on the track, on the other hand, indicates that the idea of the event was successful. But the key number was something else. The 3.370 litres of fuel dispensed by the fuel pump in the Mugello paddock demonstrates how much drivers enjoyed the first P Zero Experience in Italy. On a mid-June weekend, the powerful super cars – both current models and timeless classics – were revving up in front of the gates of the Tuscan racing track surrounded by magnificent hills. With 5.2 kilometres of total length, 15 bends and famous straight where even the fastest cars can touch their top speed, the Mugello circuit holds a special place for motorsports fanatics because of its up-and-down configuration, its hairpin curves and is downhill braking points and because it usually not open to the public for test sessions. Pirelli customers were granted the unusual honour and readily unleashed tens of thousands of cumulative horsepower on this strip of tarmac winding through the greenery. Ferrari F50, F12 tdf, 812 Superfast, LaFerrari, Lamborghini Huracàn and Aventador, McLaren 720S, Porsche 911 GT2 RS and Cayman GT4, Pagani Zonda Roadster and Huayra BC – car enthusiasts marvelled at the best automotive production of the past decades that came together in Mugello for the P Zero Experience even before actually getting behind the wheel. 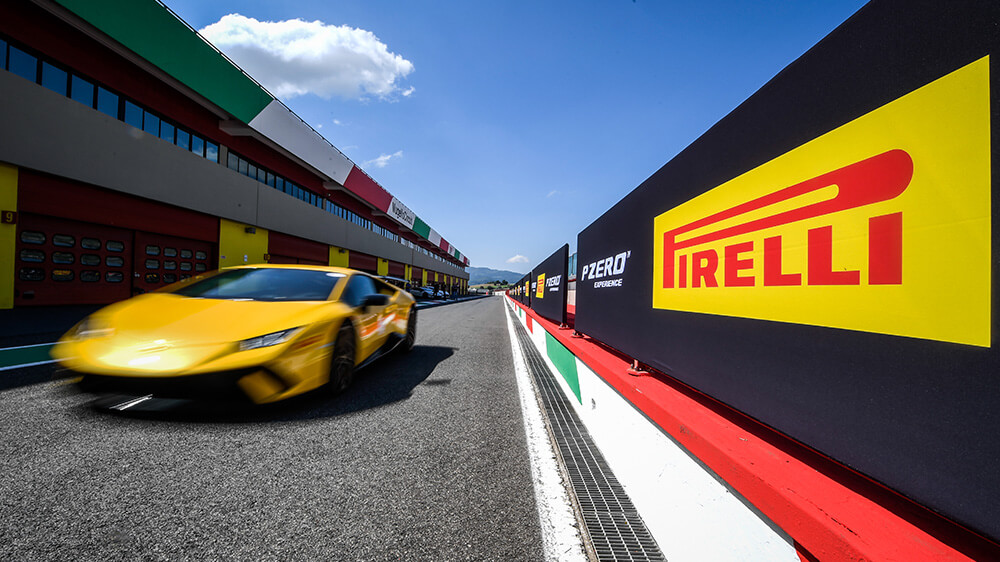 Aptly named, participants to the event enjoyed the Pirelli's prestige strategy discovering the P Zero tyres and the Collezione range dedicated to classic cars, the new P Zero Velo fitted on Pinarello Dogma F10 bicycles and the MV Agusta Brutale 800 RR Pirelli. The entire event was complemented by the images of the 2018 Pirelli calendar and Pirelli Design accessories in the best motorsport style. Car makers teamed up with Pirelli to organise test drives of the latest additions to their respective line-ups on the road and on the track. The prestige brands that have chosen Pirelli as sole tyre supplier were all present: Bentley, Dallara, Lamborghini, Maserati, McLaren and Pagani Automobili. The car maker based in San Cesario sul Panaro was represented by Horacio Pagani himself, to celebrate the partnership with Pirelli that dates back to the very beginning of his automotive career.

During breaks, Leica expert photographers held mini-courses showing how to take splendid photographs of cars. A team of Pirelli P Zero experts were also available for guests to recommend the perfect tyre pressure for fast driving on the track and to provide tips for even and effective tyre use in all conditions. Even the toughest, like those of the Tuscan racing track.

The six personalities
of the Bull