A journey to the Pirelli Research and Development Centre. Meet the engineers and factory workers who craft car tyre: for every car, in every team, at every Grand Prix

Home race Where do F1® tyres come to life?

It’s impossible to miss them when you’re watching a Formula 1® Grand Prix. They’re everywhere: fitted to the racing cars, in the garages, stacked up in tall columns, at the pit-stop, in the hands of the engineers that change them in under 3 seconds. Yet we never seem to take a moment to think about where those tyres are coming from. Who imagined them first? Who engineered them? Who produced them and then tested them? These unsung heroes work here, in the Pirelli Research and Development Centre, in the Bicocca neighbourhood on the outskirts of Milan, Italy. To step into their laboratory is to reach for the pulsing heart of Formula 1®. So far yet so close: here are the engineers and workers behind the teams and drivers they will never meet in person.

Since June 2010, five years ago, the Italian firm has produced every single tyre used by each team. They are conceived here, in this very building. Here the future is under construction, in close collaboration with each team’s drivers and engineers. Despite the physical distance from the racing track, Pirelli’s relationship with the Formula 1 teams is in constant evolution: every week a team might give a new input that needs to be addressed in a short time. Andrea Vergani has been working for Pirelli since 1997; today, he is Head of Tyre Testing. “Once we achieve the good results a team had been looking for, we must share them with the rest,” he explains. This constant exchange of information makes the job easier for the Pirelli men.

Over the years, the work done in the Research and Development department has taken on a crucial role in achieving a team’s key objectives. “Back in the days, all that mattered was the opinion of the test driver. Today we work with a more experimental angle. With our machines we can figure out Data that allow us to predict a tyre’s final performance.” Increasingly, the results of the subjective test run match the experimental data from the lab, “Our projected results are becoming more and more realistic and precise.”

All tests are equally as important. Take, for example, the flat belt MTS FlatTrac Tyre Test System: a rather ominous name for a fundamental instrument in the process of tyre testing. Without it, it would be impossible to carry out a full assessment of a tyre’s performance before it hits the road. “This machine simulates motions and weights, the cambers, derivatives and pressures that a tyre may encounter on the road. By continuously entering different parameters, we are able to obtain a carpet for tyre performance,” explains Diego Sabato, Senior Testing Engineer. Sabato has been working for Pirelli since 2013: “After graduating in mechanical engineering, I worked as an academic researcher in different fields, from trains to ships. When I joined Pirelli, I had a lot of experience with measurements. They must have thought my lateral thinking could come in hand,” he confesses, with a smile. 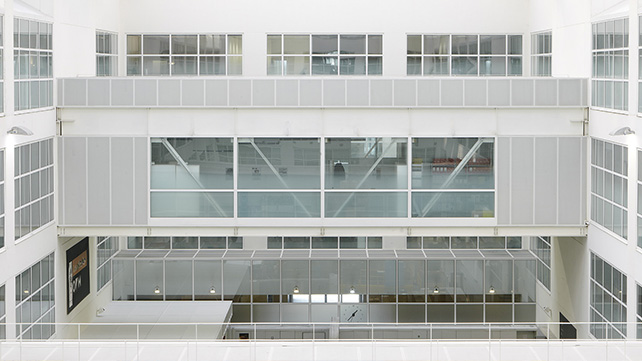 Vergani and Sabato are part of a 70-strong team working in the Pirelli R&D department. Among them, some have perfected the art of taking time off: “I used to watch every single Grand Prix; these days I’m a bit more relaxed.” Some just can’t miss a race: “It’s about passion: some of us fell for it after starting work here.” It doesn’t apply to the test drivers, though: “They learnt to drive karts before they learnt to walk.” Engineers and workers are more at ease playing the geek: “The sum of the parts of a car doesn’t excite us as much as a new tool. That’s just what we’re like: we could be looking at a Ferrari but only see its headlights.”

Pirelli provides the teams with two different types of tyres: one for dry tracks (slick), and one for wet conditions. Slicks are smooth, with no grooves. They come in four different versions, differentiated per compound: supersoft, soft, medium and hard. Their different compounds mean they are well suited to all types of circuits. Then, there are two types of tyres for wet surfaces: intermediate and wet – they are characterised by grooves in the tread pattern, engineered to drain water. Pirelli provides different sets for test runs and competition. “110 sets of tyres, front and rear, are available to each team every year, for the purpose of testing, before and during the racing season,” explains Mario Isola, Racing Manager for Pirelli. “They can use up to 30 sets per pre-seasonal session: 14 chosen by us, 16 chosen by them according to their own strategic agenda.”

Things change when it comes to racing: “This is when we step in to pick the right compound.” The layout of the circuit is crucial in selecting the tyres: “We consider every detail: the wear and tear of a tyre after a single lap, the texture of the asphalt, speed, safety, grip, pressure, the forecasted weather conditions, as well as all the experiential data we’ve accumulated over the last few years.” They already have an idea of this year’s selection of tyres. Then, according to how the cars fare during the season, they’ll make the best relevant adjustments.

It is a complex job, which relies on a strong organisational core. The Research and Development Centre is in Milan. Then there are the factories. Isola continues, “In Turkey, the Izmit factory produces all the F1 tyres. In Romania, Slatina produces the GP2s and GT – but can switch to F1 if it needs be. Then we have the industrial complex of Settimo Torinese, in Northwest Italy, where we produce our compounds.” Finally, there is the playing field: the circuit. “We allocate an engineer to each team, who acts as a point of contact between the team and Pirelli. He works in their garage and partakes in any meeting with the other Pirelli engineers at the weekend.” Every Grand Prix is assisted on location by 55 men, “on top of those who already work in Milan, at Motorsport, both in the labs and in the technical testing process.” This year features 19 races, 10 teams and 20 cars. There is a little bit of each of them in every F1 tyre, and in every one of the 38.000 that have already hit the road in 2014.

An illustrated story of Pirelli