Every year, some of the finest supercars in Europe take to the best roads that the continent has to offer – with the support of Pirelli 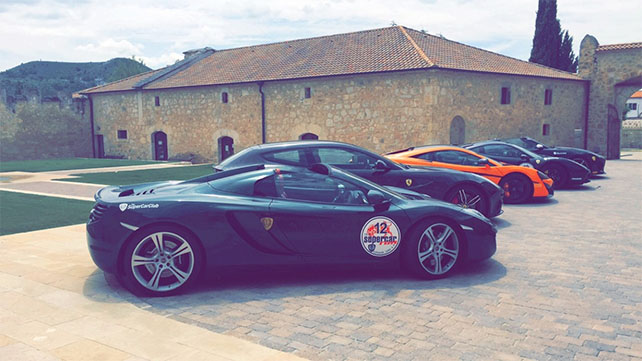 Destination Spain
Spain is home to some of Europe’s most spectacular roads, which is why Pirelli is delighted to be supporting the 2016 Supercar Run, run by the British-based Supercar Club, which took place last June 2016.

Having been run for over a decade, the Supercar run has now taken more than 1000 supercars across some of the most thrilling roads in Europe, allowing drivers to experience the most breath-taking scenery the continent has to offer, at the wheel of the most exhilarating cars ever made. As a celebration of motoring excellence and the joy of driving, it’s second to none.

This year, the stunning route ran from the north to the south of Spain, starting in Asturias – the home region of Formula 1 star Fernando Alonso – and ended up in Marbella, via the Ascari racing circuit. The formula of the run is simple: take your supercar, doesn’t matter if it’s a Bentley or a Jaguar, an Aston Martin, a Porche or a Maserati, fasten your seatbelts and prepare for this exclusive endurance car race. And just one other thing, don’t forget to fill your car up with fuel!

Safe competition
The event isn't a race but there is a competitive element, as those who participated in a clue-solving challenge (with photographic and cryptic clues en route) had the chance to win some fantastic prizes. But even if it’s not a race, that doesn’t mean we can’t see some action You’ll be surrounded by the fastest vehicles ever designed, and drivers behind the wheels ready to test the speed and the turbo engine of their and your supercar.

However, the challenge was by no means compulsory, as many people prefer just to concentrate on their driving, covering around 250 miles per day. And with some of Spain’s most scenic cities on the route, including Avila, Cordoba and Ronda, there was plenty of time for participants to soak up the sights – driving from luxury hotel from luxury hotel – before arriving in plenty of time for tapas. It has been the real meaning of Gran Turismo.

Power is nothing without control
Taking place over six nights, the participants had the chance to experience empty, sweeping Spanish roads in their own supercars, making it a truly enjoyable driving holiday that brings out the best in every car (and, of course, its tyres). The first edition of the race in Spain has been a huge success.

The marques taking part in the event included top brands such as McLaren, Ferrari and Lamborghini, with each supercar carrying Pirelli branding to promote the relationship. And with a sport car able to reach 217 mph, a quality set of tyres is a compulsory equipment. For the most part, the car companies associated with this event all use Pirelli tyres as original equipment, with the Italian firm being the world leader in ultra-high performance tyres. The best tyres for motor sport, the best tyres for every road and every situation. Pirelli also supported the event from a roadside support perspective for the entire Run.

It has been a truly stunning journey that was impeccably organised: exciting but relaxing at the same time. With P Zero tyres offering perfect safety, control and performance, the 2016 Supercar Run represented a brilliant opportunity for owners of supercars to get to know their machines even better, within a controlled environment.

Baku to the future