After the first week of racing, there’s a pause to recharge the batteries and find solutions. Emirates Team New Zealand, however, seems to be decidedly in the lead 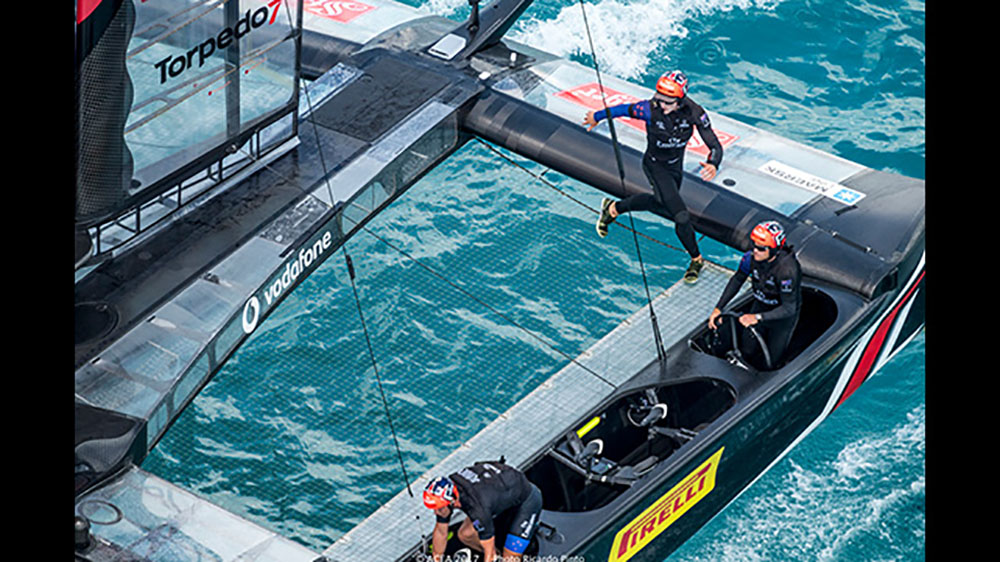 The verdict of the first weekend seems to indicate, without a shadow of a doubt, that the New Zealand craft is faster than the American one. Nobody in Bermuda really wants to admit it, for superstitious reasons, fearing a repeat of what happened in 2013, when the Americans regained the lead, leaving a sour taste in the mouths of their rivals.

Even the most naive observer would agree in an evident superiority, at least with the wind that didn’t exceed twelve knots in the first four races. The challenger, Emirates Team New Zealand, was better than the defender, Oracle, in all sectors: Peter Burling’s starting was outstanding over four races, which could have been a problem for him due to the expertise of adversary James Spithill. Speed was superb, and often dramatically better than that of the Americans. In the début race the New Zealanders recuperated from the penalty that they had following the Round Robin scores, going on with determination and confidence to a 3 – 0 score. The American team is visibly shaken, but there is caution in the Kiwi camp: four years ago the Americans managed an incredible comeback that left no prisoners, and it happened when the cup was all but won: we should also point out that the New Zealanders were winning the decisive race, which was suspended because time limits had been exceeded when they were almost at the finishing line. The problems started after this: a loss of concentration, but also some great work by the adversaries. Helmsman James Spithill promised: “We’ll try everything, we already managed once. Five days is a long time”. The programme – contrary to past occasions – includes a long break, and no racing on weekdays. Timing that could aid Oracle in finding winning solutions.

The New Zealanders, however, will also be using the days off to improve their performance: they managed to increase their speed even on racing days, appearing to have deliberately limited their showing-off, in order to keep something back from the experience gained in months of training, perhaps keeping something back as a surprise.

There were many compliments for helmsman Peter Burling: cool during the press conference, ice cold in the race, and well-coordinated with skipper and tactics guru Glen Ashby. American commentator and ex-yachtsman Ken Read, seeing him too calm, said: “Would someone explain to this guy that the America’s Cup is about to start?”

He starts calmly, with a steady heartbeat.A few errors the first day, notably a little misunderstanding with skipper Glen Ashby, who had to take the helm for a few seconds during a manoeuvre. Cleaner results were shown on Sunday, when the Kiwis taught the Americans, who had changed tactics in order to try and reach their speed, a few more lessons. The New Zealand boat, compared to their adversary’s, has two fundamental differences: the shape of the keels, which can also be clearly seen in TV, for example. The keel of the Kiwis’ boat is longer, and more fragmented, and gives an advantage in low winds; it also changes the way the wing sail is regulated. This is all difficult to see in the excitement of TV coverage, but seems to be the key to the success of the New Zealand team, who also have an assisted regulating system, that doesn’t involve the winch that other teams have. Everything is quick and semi-automatic. This is undoubtedly a subject that will be worked on by the Americans as they watch race footage to understand the differences.

Although there aren’t many spectators, Bermuda confirms its reputation as a pleasure island: mega yachts have already arrived, filling the quays of the village and of the capital, Hamilton. A lot of people are rooting for ETNZ, in the hope that regulations will revert, especially regarding large monohulls and to the rule that the crew should be majorly composed of nationals of the team represented. In a few words, that there will be a rethink following the guidelines laid out by Russell Coutts, considered by many to have spoilt the show rather than enrich it. Will it happen? Meanwhile, one of the sponsors of ETNZ, Toyota, has taken a page in a local newspaper, saying: “if you support us, we’ll leave you the boat”. As if to say: if we win, we won’t need it any more, and it can stay here.

Early winds blowing on the Cup