A 166-year-old story of competition among men, yachts and technology Pirelli will be there for the 2017 with Emirates Team New Zealand

Home race The spectacular show of the America's Cup

The spectacular show of the America's Cup
Show more images 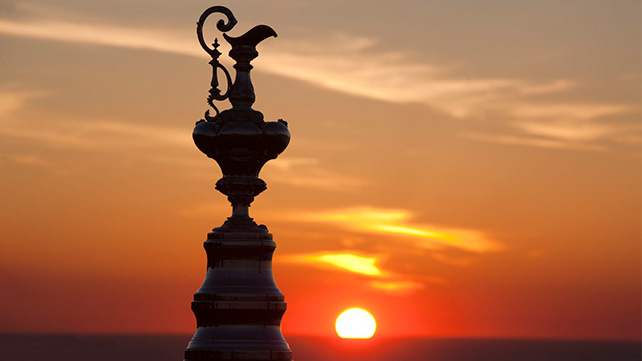 Pure adrenaline! This is the essence of the 35th edition of the America's Cup, scheduled for 26 May to 26 June in the Bermudas. In the oldest sporting competition in the world, even older than the modern Olympic Games, six teams from different countries will challenge each other on sailboats featuring cutting edge technology. The boats must be mastered by crews of supermen, whose athletic gifts will be put to the test by a series of extreme challenges.

More than anything else, the America's Cup is a challenge of design and engineering: these yachts feature the best and latest technology. The rules of the America's Cup have always helped to push technology forward to create increasingly faster sailing vessels.

The boats in this year's competition belong to the new "America's Cup Class": 15m-long catamarans, with a six-man crew and a total sail surface of up to 101 m2.  When the wind blows at over six knots, the catamarans lift up above the water, resting on rails made from carbon (foils) and controlled by long rudders.

Literally flying on the foils, the yachts can reach speeds of up to 50 knots (the speed of a production hydrofoil), making the reggatas races of speed: essentially the Formula 1 of the sea.

The History of the America's Cup
In August 1851 the New York Yacht club challenged the British Royal Yacht Squadron in a race around the Isle of Wight. The British took part with 14 yachts, the Americans with the schooner "America" (a sailing boat with two or more masts) .  "America" won by eight minutes ahead of the first British yacht, "Aurora".

The trophy was originally known as the 100 Guineas Cup, but after the victory of the Americans it was renamed America's Cup.The Brtitish sailors saw the defeat as an outrage and in the following years tried their hardest to bring the cup back to Great Britain, but without success. The Americans remained unbeaten for some 132 years.

In 1983 there were seven challengers: Australia with three yachts, Great Britain, Italy, France and Canada. For the first time the challengers competed in a series of elimination races for a place in the final against the United States. Australia reached the final, before registering a shocking victory against the Americans, taking the cup out of their hands for the first time after 132 years.

The Americans then took the cup back the following year. Over the years the contest between defender and challengers became a technological challenge, where the interpretation of the rules was a fundamental aspect of the development of the yachts. It got to the point where arguments even ended up in court to decide whether the yachts were in line with regulations or not. Finally, in 1992, the International America's Cup Class was introduced, which remained in place until 2007. In those years the trophy was won alternatively by America Cubed, Team New Zealand and the Swiss team Alinghi. With the victory of Alinghi in 2003 the America's Cup returned to Europe for the first time since the original edition in 1851.

In 2010 Alinghi lost its grip on the cup, which returned to the United States with BMW Oracle Racing. The American team successfully defended its title in the next edition against New Zealand. The final featured an incredible comeback from the American crew, who came from 8-1 down to win 9 races to 8.

The 2017 competition
The formula of the America's Cup includes an initial round robin format where all the teams from the competition are involved, the challengers - Artemis Racing (SWE), Emirates Team New Zealand, Groupama Team France, BAR  Land Rover (UK), Softbank Team Japan - and the defender  - Oracle Team USA.

After the elimination stage only four teams go through to a play-off, while the defender goes directly to the final.  The play-offs consist of two semi-finals and one final, with the winner going on to challenge Oracle Team USA. Regulation note: if the team which wins the initial round reaches the final of the America's Cup, it starts with a one point advantage in terms of races won. The first team to reach seven points will be declared the winner of the 35th edition of the America's Cup.

The venue
Now we've had a good look at the competition rules, here's some extra information on the venue for the 35th America's Cup, Bermuda, an island in the Atlantic Ocean 600 miles off the coast of the United States. Bermuda was selected ahead of Chicago, Denver, San Diego and New Port in Rhode Island. Formidable adversaries, particularly given their ease-of-access and the infrastructure already in place.

So why the choice of an island 600 miles off the US coast?
There are a few good reasons, including the opportunity to create a village for the participating teams. In the Bermudas the six teams will be accommodated side by side in the same area, something which was only possible once before, in Valencia in 2007. The idea of the organisers is to create a sort of paddock, just like in motor racing, where fans, journalists and insiders can all meet the stars of the race at the same time and in the same place.

Then there is the area where the racing takes place: a natural bay in Bermuda was selected, Great Sound. There are lots of great observation points, even on land, and not only for the supporting boats of the teams and the organisers.

The metereological conditions also played a large part in the choice of Bermuda. Wind conditions are ideal for ensuring the races of the America's Cup catamarans will be absolutely spectacular. All the teams have voiced their enthusiasm for the wind conditions at Great Sounds during the preparation phase and test races.

And finally, Bermuda's time zone makes it possible to follow the races easily in both Europe and the United States. Though the same can't be said for fans of Emirates Team New Zealand. But then they are the challengers and the organisation of the event is in the hands of the holder of the cup!

The Teams
Let's start with the cup's holders: Oracle Team USA. Winners of the 2013 edition in San Francisco with an epic comeback against New Zealand: 8-1 down, they won the competition with a stunning 9-8 victory. They are once again the favourites for the 2017 edition, with many expecting them to complete a hat trick of victories. If they win the 2017 competition they will become the only team to win the trophy three times in a row, having also won in 2010.The skipper is an Australian, Jimmy Spithill.

Ben Ainslie Racing (BAR) Land Rover is the British team, founded in 2014, aiming to bring the cup back to the United Kingdom for the first time since the first ever regatta in 1851. During the World Series races, BAR Land Rover were able to comprehensively defeat the other teams. This is why they are considered one of the main contenders for the 2017 America's Cup.They will begin two points ahead in the round robin stage in Bermuda.

Emirates Team New Zealand, with Pirelli as the proud sponsor for the first time, is a symbol for New Zealand, where sailing is more popular than in any other country. Everybody is speaking about ETNZ because of the innovative and exciting introduction of pedal stations. One of the men pushing those pedals is the Olympic medal winner (bronze at London 2012 in the keirin, a special track cycling event) Simon van Velthooven, hired as a "motor" and converted into a sailor.The skipper is the Australian Glenn Ashby.

Artemis Racing Swedenhas won all the test regattas in Bermuda after also winning the World Series round held at Great Sounds. Their debut in 2013 was unfortunately darkened by the death of a member of their crew, Andrew Simpson, when the catamaran capsized during a test and preparation phase. The yacht is guided by the Australian skipper Nathan Outteridge.

Softbank Team Japan are debutants in the America's Cup. The skipper, Dean Barker, is a veteran of the competition with more than 20 years of experience. He was the skipper of Team New Zealand in the 2013 competition.

Groupama Team France is guided by skipper Franck Cammas and will participate in the America's Cup for the first time. They are considered the outsiders: bookmakers have them at 40 to 1. Note: Cammas is returning from an accident which nearly led to the loss of his foot during a test regatta in 2015.

Pirelli
Pirelli is the official sponsor of Emirates Team New Zealand. The long rudders of the New Zealand catamaran are marked with the iconic "P Zero" logo in red and yellow. It wasn't a casual choice: the rudders of the catamaran control the yacht and are the result of advanced technological research in terms of both materials and form in order to ensure the yacht performs to its maximum. Just like Pirell's P Zero tyres, specially designed for racing cars. Colour and technology, P Zero Colour Edition and Pirelli Connesso, the revolution brought by Pirelli to the world of tyres in 2017.