The evolution of boats

The America’s Cup is tradition, competition but also innovation. Here’s how the catamarans’ technologies have changed over the years to such an extent so as to influence the performances and the overall entertainment of the regatta

Home race The evolution of boats 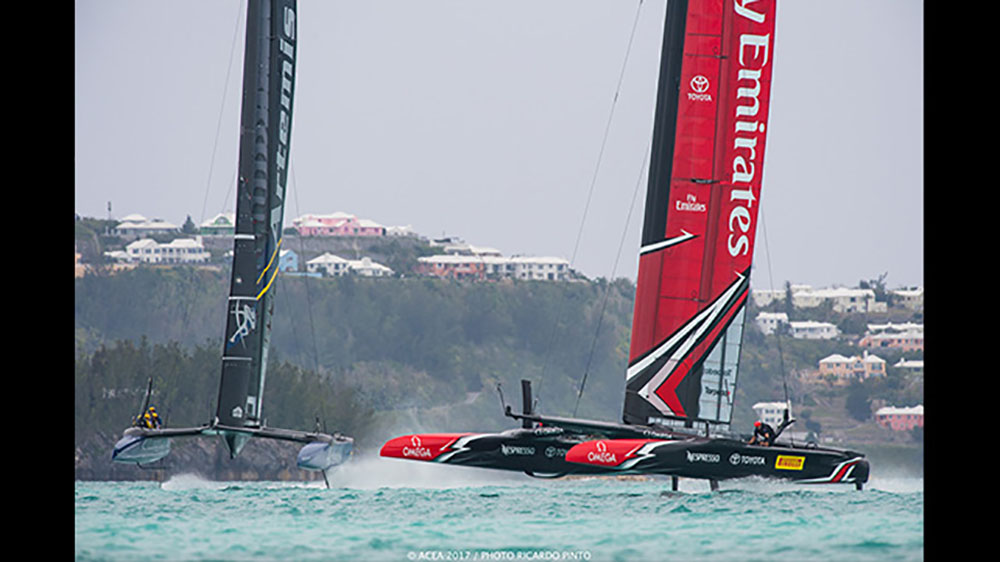 The America's Cup has always been a showcase of technological innovation, right from the very first edition – the famous regatta around the Isle of Wight, won by the schooner America that lent its name to the trophy.  What now seems to be inexorably old hat  was seen as being ground breaking at the time: just over a century ago, aeronautical engineers were busy designing and building the fastest possible J-Class yacht for Thomas Sopwith, constructor of the Red Baron's triplane and, later, World War II fighter planes. And it's no coincidence that these sea giants will again take to the waters in Bermuda on those days when the crews of the super fast 50 ft foiling catamarans are resting during this year's America's Cup. Indeed, many shipyards have begun building these magnificent craft to original designs. A trend accessible to only a few tycoons, of course.

A bit like the two sides of the moon: on the one hand, we have the ultra modern AC50 class catamarans with their wing sails, fantastic energy, crews straight from Top Gun and rudders like an F1 steering wheel, full of gizmos to control the trim and other matters. Carbon fibre beauties. On the other, we can admire the dimensions and lines of the J-Class yachts with their large crews, typical of a by-gone era. Old, obsolete technology? Perhaps.

Yet wing sail catamarans are not new to the America's Cup: Dennis Conner's Stars & Stripes won in 1988. One of the greatest sailors of his day and a sophisticated technician, John Marshall said of these: “Once you've sailed on one of those things, you never want to get off...”, hence Larry Ellison and Russell Coutts’ decision to race these boats.  After that race in the late 1980s, only IACC monohulls were raced in the America's Cup - including Il Moro di Venezia, Luna Rossa, Mascalzone Latino and the +39 Challenge. That is, until the contested edition of 2010, which marked a change in direction.

The profile of the BMW Oracle and Alinghi yachts – two skyscrapers made of sail that blocked out the sun in Valencia – was the most noteworthy aspect of the 33rd edition of the America's Cup. It was a real fight to the end, even including lawyers and courts. Very modern, one might say. Yet the two yachts were absolutely amazing: the perfect expression of extreme sailing.  Alinghi 5 was a gutsy beach catamaran, while the USA-17 - the BMW Oracle Racing boat - was a tamed ocean-going trimaran. It's easy to explain how these could build up such fast speeds: with a true wind speed of just 8-10 knots, they could reach a velocity of 30 knots. That's almost 60 km (35 miles) an hour. With a true wind of 15 knots, they easily flew over the water at 40 knots. The most spectacular feature was the BMW Oracle rigid sail wing. Instead of the mainsail (the sail normally behind the mast), the designers for the American team – including the Italian Mario Caponnetto – chose a 67 foot wing based on aviation and nautical knowhow. Yet this had already been done, albeit in smaller, easier to manage dimensions, but it was one thing to sail a beach catamaran, quite another to manage this giant: the wing sail had to be dismantled and stored in a hanger if the wind was too strong.

Since then the wing sails on all the AC45 one-design catamarans used for around the world races and training purposes share the same construction, as do the new AC50s in Bermuda: a carbon fibre framework with panels made from a special aeronautical fabric. Once fitted to the frame and varnished, this technical fabric makes the perfect sail. The wing is split into two sections lengthwise: that at the front replaces the mast, while that at the back is divided into independent panels. The angle of incidence between these two sections can be adjusted, taking into account the angle of the hull and the position of the rear panels. Fluid dynamics simulation programs assist the adjustment process: these suggest the best sail profile for every speed and point of sail. There is, however, still room for old-fashioned intuition and the skills of a sailor-cum-aviator.

The 2013 edition saw the New Zealand team add another innovation to their catamarans: foiling, that is, the ability of the boat to lift off the water, suspended on just three points – a cleverly designed keel and two hydrofoil rudders. The best settings are critical to get the best performance: the “fins” can be moved by a mere fraction of a degree. As a result, speeds have increased dramatically, reaching up to 50 knots (almost 100 km/h or 60 mph). This “invention” has changed sailing for ever. Indeed, the Nacra 17 class of foiling catamarans are now seen at the Olympics.  Once again, the America's Cup leads the way.

The technological and human challenge of this edition of the America's Cup is mainly focussed on the profile of these "fins" (the keel and rudders), as this is essential for performance, but it will be hard to manage the boats. Suffice to say, each team has developed a fully automatic system that "teaches" the crew what adjustments are needed. Complex control systems, with gyros and gravitational sensors, as found on modern airplanes, are now being used to discover how to get the best performance out of these catamarans. During a race, though, it will be all up to the helmsman and the crew. Then there’s the matter of the power that the crew need to generate for all the various manoeuvres and adjustments. New Zealand has introduced another innovation here: pedal power, i.e. stationary-bike grinding stations. Not a bad idea. Legs produce about one and a half times more power than arms can.