The 2016 ADAC
Formula 4 season:
the school of high speed

Tyres of exclusive supplier Pirelli deliver at all weather conditions 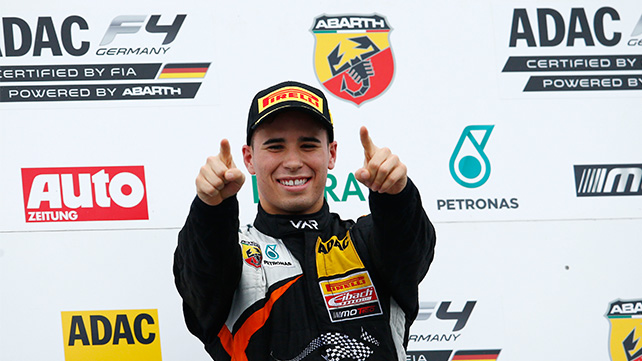 It was an action-packed day at the Hockenheimring on 2 October, when the second ADAC Formula 4’s season ended with a fiery finale. The championship trophy remained fiercely contested until the very last racing weekend, when 20-year-old Australian Joey Mawson (Van Amersfoort Racing) gained the title. His friend and rival Mick Schumacher carved out a strong second place for himself in the overall ranking. With a spectacular passing manoeuvre in the second to last lap, the son of seven-time Formula 1® world champion Michael Schumacher won the last race. On top of this, the 17-year-old contributed greatly to his Italian Prema Powerteam winning the team championship. “We made the best of this weekend. Of course it would have been great to win the drivers’ championship this year. But the team championship rounded the weekend off quite nicely,” he said after the final race.

In the following season, Mick Schumacher plans to compete in Formula 3 in order to gain experience and take the next step towards Formula 1®. He would love to accomplish his progression with Prema Powerteam, which has become his home in motorsports. The team`s mentality and passion for racing strongly appeals to the young German.

New Formula 4 champion Joey Mawson pushes for Formula 3 as well. He made short work of the season’s finale at Hockenheim, already securing the championship of the ADAC high speed school during the first race. “It’s a phenomenal feeling. It hasn’t really registered yet, that will probably happen within the next few days,” so the Australian happy, who has been victorious in ten of the season’s 23 races and has won a spot on the podium in six.

The rookie championship, too, was effectively held on hot tyres: only in the last race, 19-year-old Nicklas Nielsen from Denmark (Neuhauser Racing) won the overall victory.

There can be no doubt: the ADAC Formula 4 lives up perfectly to its mandate and has established itself as a talent pool in its second season already. In the preceding season, 46 up-and-coming young drivers from 17 nations between the ages of 15 and 21 gave proof of their talent during seven thrilling racing weekends, deeply impressing the spectators with their courage and driving skills. And with Sophia Flörsch, Carrie Schreiner, Michelle Halder and Marylin Niderhauser, there were also four young ladies participating in the races.

And just like Formula 1®, the teams and drivers are obliged to consider the tyres thouroughly, as tyre management is a decisive factor in Formula 4 as well. Apart from circuit layout, surface condition and indoor and outdoor temperatures, the driving style of the drivers has a significant impact on how long his set of tyres will deliver a top performance. Another parallel to the premier competition: prior to every race, Pirelli provides technical recommendations for the use of the tyres.

The young drivers covered 1,525,743 km in total on the Pirelli tyres, attesting to their high performance level during the most diverse conditions.

But it was not only the tyres which proved reliable during the whole ADAC Formula 4 season. At each racing weekend also Pirelli mechanics and engineers were on-site to provide the teams and drivers with professional advice and support at all times. The close cooperation and open communication yielded valuable experiences and insights, for determining the individual racing strategy but also advancing the tyres themselves.

This will work to the advantage of the teams and their young talents in the ADAC Formula 4 season of 2017 as well.