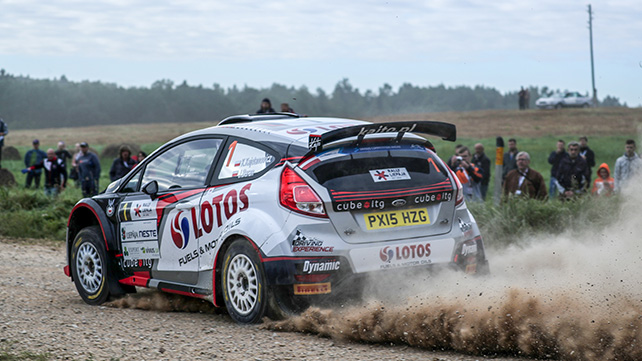 In the beginning was the ERC…
What is the oldest rally championship in the world? It’s certainly not the World Rally Championship, which has actually ‘only’ been going since 1973 (in fact, the drivers’ championship has only existed since 1979).
Instead, it's the European Rally Championship, known as the ERC, which had its debut season in 1953 (only three years after Giuseppe Farina won the inaugural Formula 1 World Championship with Pirelli) and has been going continuously ever since, taking in some of the best driving roads that Europe has to offer.
This year’s championship was clinched over the weekend on Rally Liepaja by Polish driver Kajetan Kajetanowicz for the second consecutive season, using a Ford Fiesta R5 running on Pirelli tyres.

So who is Kajetanowicz? And where is Liepaja?
The 37-year-old, who shot to fame when he won his domestic series six years ago in a Group N car, sealed the championship that he has led since the second round in March. Liepaja, to the north of the country, was for many years a ‘closed city’, which the Russians – the rulers of Latvia until 1991 – denied even existed, such was its importance as a military base, with the backbone of the renowned Baltic Fleet based there.
These days, the atmosphere is very different: Latvia is a member of the European Union, with an outward-looking population that is keen to attract more tourism to the country, which is why the rally is on the European calendar.
But while the Communist era is history, there are still many dark secrets lurking on the roads for rally drivers. Like Finland, the stages are very wide and fast, which makes them deceptively difficult.
“When you have a wide road, it’s more difficult to be fast,” explains Kajetanowicz. “It means that you have to choose your line very precisely, like a racing driver, and over a long stage that makes a big difference.”
Long and fast stages also mean that the heavier Group N based cars – such as the iconic Mitsubishi Lancer and Subaru Impreza – potentially have an advantage, because although their makes them slower over a twisty stage with braking and acceleration, a fast stage means that they can exploit their superior top speed.
This is something that Alexey Lukyanuk – Kajetanowicz’s only title rival, who also runs Pirelli tyres – took advantage of in Latvia. On last year’s Rally Estonia, which is similar in character to the Latvian stages, Lukyanuk used a Group N car and Pirelli rubber to claim victory against technically superior cars by winning every stage.
In Latvia, he used a Group N car again: but with the stages being that bit slower, he could only manage second. Still, he was happy with the result: and he is also set to claim the runner-up spot in the European championship.
Kajetanowicz though was rarely under serious threat: he led the championship from the second round in Ireland, while the highlight of his season was victory at home in Poland. He used all of Pirelli’s rally products over the course of the year both for asphalt and gravel: from the P Zero RK to the Scorpion K. In fact, Pirelli had more than 50% of the market on the European Championship, underlining how the Italian tyres have been at the forefront of the action all season thanks to the continuing evolution that puts them at the cutting edge of both performance and technology.

Anatomy of a champion
What makes Kajto so special? His ability to read the road and match a tyre choice to those conditions has proved to be a key part of his success … as well as an attitude that means he takes things as they come, rather than worrying too much about the whys and wherefores.
Take the afternoon that he won the championship. With just three stages separating him from his destiny, he was calmly munching his way through a mound of pasta: the food favoured by drivers to load them with stage-winning carbohydrate.
He took advice from Pirelli about his tyres, but also about his pasta. “Is this the way you cook it?” he asked, waving a forkful around. “Because I’m not sure. Maybe it’s too soft. Should be a bit harder I think? Definitely good though.”
Anyone overhearing him would have assumed that he was talking about tyres. After all, it was Pirelli’s general manager technology, Maurizio Boiocchi, who first said that making a good tyre was a bit like making a good risotto…