The Pirelli Carlisle Rally, celebrating its 40th season, has been backed by the Italian tyre firm for 25 of those years, making 2016 a very special anniversary

For Pirelli, the high-octane event is extremely significant as it takes place every year in Carlisle: the home of one of just two Pirelli factories in Great Britain, along with Burton upon Trent.
The Carlisle factory, with its cutting edge facilities, produces some of the most technologically advanced tyres on sale today, which are designed with Formula One know-how. As a result, it is absolutely central to Pirelli UK’s activities, which is very proud to call the city home. 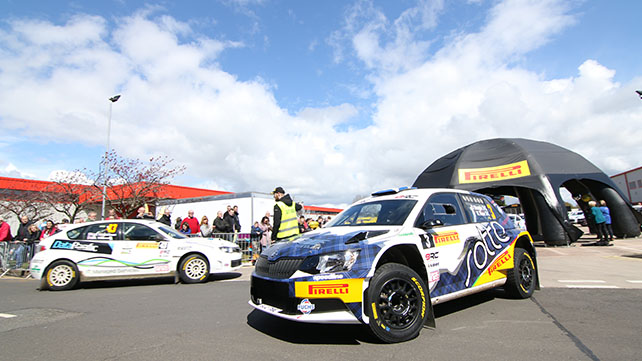 From a sporting point of view, the Pirelli Carlisle Rally is one of the most famous in Britain, made up of high-speed gravel roads in the Kielder Forest. This year, it marked the third round of the British Rally Championship, which has produced top stars of the sport such as Colin McRae and Richard Burns in the past. And the winner was none other than Fredrik Ahlin from Sweden, who used his Pirelli tyres to also claim the championship lead.
The rally consisted of seven stages over Saturday afternoon and Sunday morning this year, totalling 75 competitive miles. All of them were free for fans to watch, making the event a popular attraction.
In another innovation, the rally started from Pirelli’s Carlisle factory for the first time, before the cars headed out into the challenging forests. There were also plenty of rally cars from the past for people to see in the historic class, providing something for everyone.
Pirelli’s British Rally Championship competitors had the full range of Scorpion gravel rally tyres available to them. In particular, the renowned K6 and K4 gravel tyres were perfect for the fast forest tracks of Cumbria, with K6 being a softer compound – well suited to cool weather and mud – while K4 is a slightly harder compound. The unique tread pattern is especially designed to disperse loose gravel, stones and mud, which is what makes it especially effective on some of the most demanding stages in Britain.
Matthew Corby, Pirelli Motorsport Operations Manager, said: “The Pirelli Carlisle Rally marked a very important date in our calendar, and especially so in this anniversary year, both for the rally itself and our association with it. It was a special moment when we saw the cars set off from the factory for the challenging Kielder stages, highlighting our strong manufacturing presence in Carlisle, and fantastic that Fredrik was then able to bring us home a victory.”
Above all, it’s the people of Carlisle who help to make Pirelli such a dynamic presence in the local area by strongly supporting the company’s home rally, which plays such a key part in Pirelli’s sporting history.