Pirelli at the Cape Epic, the legendary mountain bike race

An eight-day race through an untamed South Africa, a challenge for tyres of the toughest levels

Pirelli at the Cape Epic, the legendary mountain bike race

Tackling the impassable nature of South Africa. Going beyond your limits. Having your name etched into the Book of Legend. That’s what the Absa Cape Epic, the most incredible mountain bike race in the world, is all about. It takes place in March across seven stages (plus the prologue), for a total of 647 kilometres with 15,550 metres of vertical ascent.

The start location is Cape Town and the finish is in Val de Vie, racing in pairs with both riders needing to cross the finish line together (the arrival time of the second in the pair is recorded), after tackling rocky roads and rugged tracks through the vegetation. Temperatures are close to 40 degrees, up climbs with an almost 20% gradient and down breath-taking descents, where no distractions are allowed.

The 650 pairs who participate in the race each year include the very best professionals (male and female) in the world, as well as amateurs: they register through a draw and can give their all to what is referred to as the Tour de France of mountain biking or, as the Cape Epic itself defines in its claim, The race that measures all. 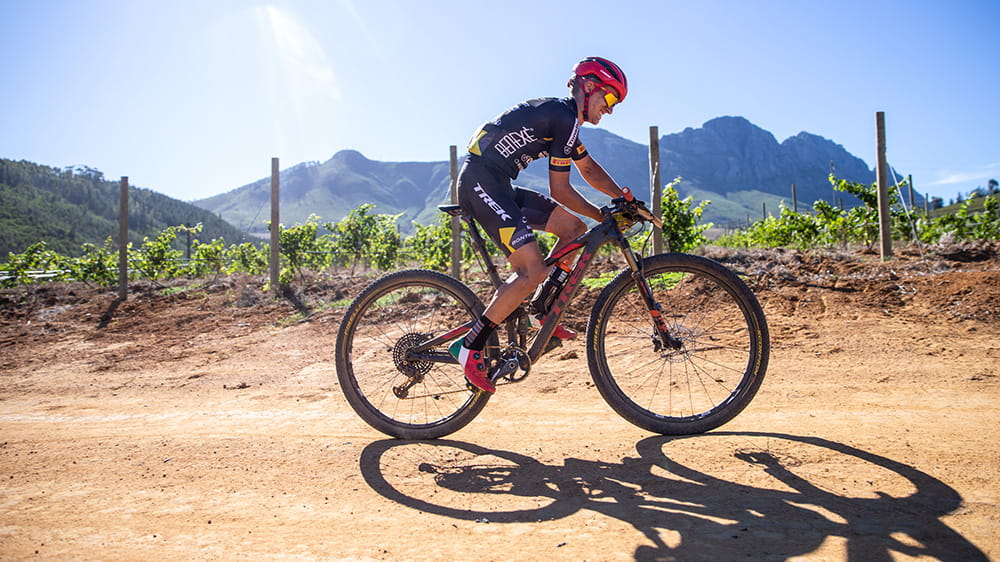 The race is one of a kind in terms of its formula (in stages and in pairs), route and landscape, and it has become a fundamental event in cross country racing, which in fact opens the mountain bike season. Obviously, Pirelli is also present, supporting official teams and amateurs. In addition to the mountain bikers, whose resilience is continuously tested throughout all eight, tiresome stages, the bicycle tyres are also seriously put to the test: at the 2019 Cape Epic Trek, fitted with tyres from the P lunga brand, was the only top team never to have had a puncture during the entire race.

Besides, in a competition which is a challenge to one’s limits, a meeting with nature and an extreme challenge, Pirelli could under no circumstances fail to be present, as it has always been a pioneer in the pursuit of innovation and excellence. Having reliable tyres in cross country races is important; having them at the Cape Epic is absolutely crucial. Not just because the route switches from rocks, to sand, to a river crossing in a very short space of time, but above all because technical support is not always available on the impossible South African roads, and for most of the time the athletes are on their own. Even psychologically, knowing that they are starting off with Pirelli tyres is a confidence boost for mountain bikers preparing for the race.

The names of the stages help bring to mind the epic atmosphere that pervades the South African mountains: from stage 2, Forgive my sins, to the extra-tough stages 5 and 6, The only way is up and Into the wild, both with almost 3,000 metres of vertical ascent. The fifth stage is the true deal-breaker between those who are capable of reaching the finish line and those who have to give up, whereas during the sixth stage the mountain bikers cross a nature reserve populated by zebras, giraffes and other wild animals. Participating takes courage, sang-froid and immense strength of mind and outstanding skill to reach the finish line in Val de Vie.

Between one stage and another, amateurs sleep in tents, all together, because the Absa Cape Epic is a competition, and one of the toughest, but it is first and foremost a challenge for themselves and their limits.

Cadel Evans, an ode to difficulties