Purple is the sidewall colour of the new tyre for dry conditions. Will the first day of testing be enough to tell us something about the Ultrasoft tyre?

A las cinco de la tarde, on Monday, 22 February, if the forecast in Catalonia doesn’t call for rain, Formula 1® could have a bit better idea about the new slick tyre that Pirelli is bringing to the track this year: the P Zero Purple ultrasoft. But if the skies over Montmeló turn grey, that Monday evening at 5 o’clock, we could know something more about the new Cinturato Blue full wet instead.

Purple is the colour of the stripe around the sidewall of the new tyre for dry conditions, as chosen by a flood of votes on social media in favour of the new colour in place of the previous silver stripe. The compound, too, is all new and extremely soft, softer than the supersoft seen on track up to the 2015 season and brought back unchanged for this season, along with the soft, medium and hard tyres, which complete the range of slicks. The low working range of the new ultrasoft tyre compound, too, will further exalt the tyre’s tendency to provide maximum grip. What this means is that the tyre will achieve maximum efficiency at fairly low temperatures, so it will reach the optimal working range very quickly.
Will the first seven or eight hours on the first day of testing in Spain be enough to tell us anything important about the ultrasoft tyres? Well, technically speaking, given the characteristics of the Catalan track, with its highly abrasive surface and fast turns that put great pressure on the tyres, the ultrasoft tyres won’t be used on race weekend in Spain in mid-May. The ultrasofts are designed for tracks with slower turns and surfaces with low levels of grip, such as Monte Carlo, or circuits like Canada, Singapore, Austria, or Abu Dhabi. Situations in which grip will have to come from the tyres, since it won’t come as much from the aerodynamic features of the cars. That’s where the ultrasofts come into their own, but a few teams have chosen the ultrasofts for testing in Spain, scheduled form 22 to 25 February and again from 1 to 4 March. Anticipation is high! 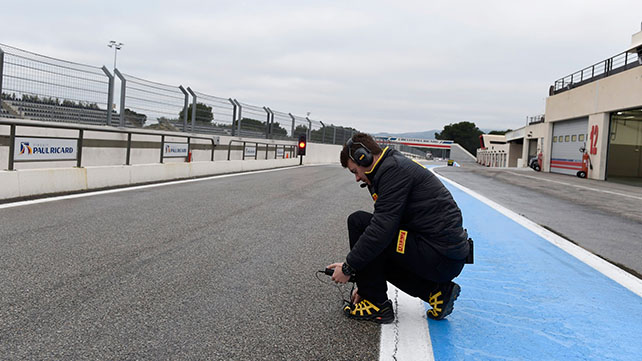 The new Cinturato Blue wet that Pirelli is bringing for 2016 was tested two days in January on a track that was made wet artificially and to a constant, predictable degree. Three teams—Ferrari, Red Bull and McLaren—were on hand to test the various prototypes, featuring new compounds and new construction. The version selected for 2016, which will be available for testing in Barcelona, confirmed its excellent performance numbers in the wet, expelling 65 litres of water per second per tyre at top speed. What should have improved is its ability to provide maximum grip in cross-over conditions, i.e. when the track is shifting from dry to wet or the other way round. This versatility is crucial both in testing and during the race. Greater efficiency in changing conditions means greater driver safety and a greater ability for the pit crew to decide strategy.
One thing we know for sure. Whatever the weather does in Spain during testing (and this time of year is often full of surprises), Pirelli will be able to put at least one of these new tyres for the coming season through its paces. Will we see more of the purple ultrasofts or the new rain tyres? Well, those of us who will be following testing out on the track certainly have our own, let’s say, selfish preference, but who are we to stand in the way of technical development?

F1® tires reviews: behind the scene