The champion has taken the throne in the 2015 European Rally Championship.
It was a season of thrills and adrenaline from start to finish, as it can only ever be in the only races held on ever-changing surfaces, whether it be off-road, tarmac, snow, or ice. Rally racing is one of the most complex disciplines in the world of motorsports and really brings out the technical prowess of its champions. You can’t count on the mistakes of your opponent; what counts, first and foremost, is your own talent. In 2015, it was Kajetanowicz who ultimately proved to have the greatest talent in Europe. 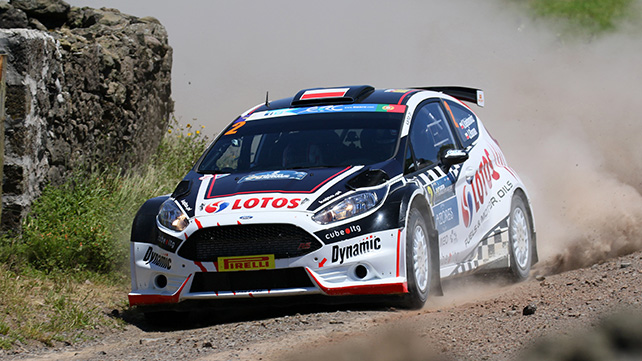 The season came to a close in Switzerland with the Rallye Internationale du Valai on 1 November, where Alexey Lukyanuk was victorious in his Ford Fiesta R5 ahead of Craig Breen. It was a thrilling race, but had no impact on the overall result, given that it had all been decided three weeks earlier at the penultimate race of the Championship, the Acropolis Rally of Greece.
From 9 to 11 October, Kajetan Kajetanowicz defied the wrath of the gods at the foot of Mount Olympus in a Herculean effort that saw him ultimately victorious, putting the finishing touches on a season he dominated right from the start. The Polish racer had this to say about his great season, “You need great dedication and hectolitres of sweat and tears in order to fulfil such a big dream, but it is also important to have a bunch of good-hearted and committed people around. This is why today, celebrating this success, I want to say ‘thank you’ to every person who has not doubted that we could achieve this and supported us on so many—also those very difficult—stages of our road to the European Rally Championship title.” And this victory is even more impressive in that it was achieved by a privateer team, underdogs out of the gate.
It was an undertaking that reached its climax at a truly heroic stage, under a torrential downpour on roads that were challenging, to say the least. Behind the wheel of his Ford Fiesta R5, Kajetanowicz took home the European Championship with his victory here at the Acropolis Rally, a race normally run in the heat of the Greek sun, even if held in October, and on dusty, rocky mountain roads. This was to be a race full of surprises, as drivers and race organisers were forced to deal with heavy rains that showed no signs of stopping.
Early October on the Peloponnese saw an unusual series of violent storms that played a leading role on race day, causing serious challenges for race organisers, who had no choice but to shorten the route given that sections of the planned route had become totally unusable.
After a first stage packed with difficulties throughout, only the first four special stages were completed, with the final three being cancelled due to prohibitive weather conditions. But this was enough for the Polish driver to take home the title. After victories in Austria, Cyprus and Greece and an entire season in which he consistently demonstrated his skill, Kajetanowicz rose to the top of the rostrum to take the title of 2015 European Rally Champion in Greece.
“Kajetan Kajetanowicz’s success is even more significant in that it was achieved by taking on the factory-backed teams,” said Terenzio Testoni, product manager for Pirelli, “and it is a source of great pride and satisfaction to have helped a privateer take the European title. Kajto raced great all season and on all surfaces, proving once again the quality of Pirelli Scorpion K tyres in the dirt, Pirelli P Zero RK on tarmac, and Pirelli Sottozero Ice tyres on snow. And in Greece, victory came on a surface that was just about impossible.” Kajetanowicz is the third Polish racer in history to take the European title, along with Sobieslaw Zasada in 1966, 1967 and 1971 and Krzysztof Holowczyc in 1997.
It is a title that further enriches an already triumphant 2015 rally season for Pirelli, which can now add the European title to the Italian title won by Paolo Andreucci on 94 points, ahead of Giandomenico Basso and Umberto Scaldola. Behind the wheel of his Peugeot 208 T16, the eight-time Italian champion took home the 2015 title in Verona at the Rally delle Due Valli, extending his titles to nine after previous overall wins in 2001, 2003, 2006, 2009, 2010, 2011, 2012 and 2014.