How the Emirates Team New Zealand managed to win the America-s Cup, thanks to advanced technology and good instincts

The Kiwis nailed it. They’re taking the cup home that they first won in 1995, which then went to Valencia in 2003 and on to San Francisco in 2010. Emirates Team New Zealand wins the America’s Cup for the second time with meticulous preparation and national pride. Yachting is New Zealand’s national sport, and this victory will be celebrated in grand style. Viaduct Basin and Queen Street, in Auckland, will be the centre of celebrations for CEO Grant Dalton, helmsman Peter Burling, skipper Glen Ashby, and all the crew. A young, rich and talented group who, as well as having refined techniques, also showed great skill in their management of the craft. The points gained in this victory leave no doubt as to the superiority of the Kiwi team. ‘Oracle’, four years after their spectacular ‘comeback’ in San Francisco, was unable to demonstrate the same degree of progress. Her helmsman, James Spithill, appeared disorganised compared to Burling. People thought the young Kiwi would feel intimidated by a great champion who’d already won the cup twice, but no: Burling, in nautical terms, ‘took the wind out of his sails’ in more than one starting. The points have the sweet taste of a settling of scores, almost a punishment.

What were the keys to this success? On the human level, Peter Burling’s cool head, a recent gold medal winner at the Rio Olympics. He’s a really daring personality, light years away from Dean Barker, who preceded him. We must also mention the experience of Glen Ashby, chosen years ago for his familiarity with multihulls. On a technical level the innovations demonstrate how the designers, some of whom Italian, managed to cleverly interpret the rules of the race. The production of energy on board (in the form of pressurized hydraulic oil) gained by four cyclists instead of four ‘grinders’. Legs give more continuous levels of energy as well as more power. The lack of energy that slows a boat down is almost always the reason for interruption of foiling. New Zealand has taken aboard professional cyclist Simon van Velthooven for this role. They also sought elsewhere in other areas: on the ‘Artemis’ a canoeist took on the role of ‘grinder’. 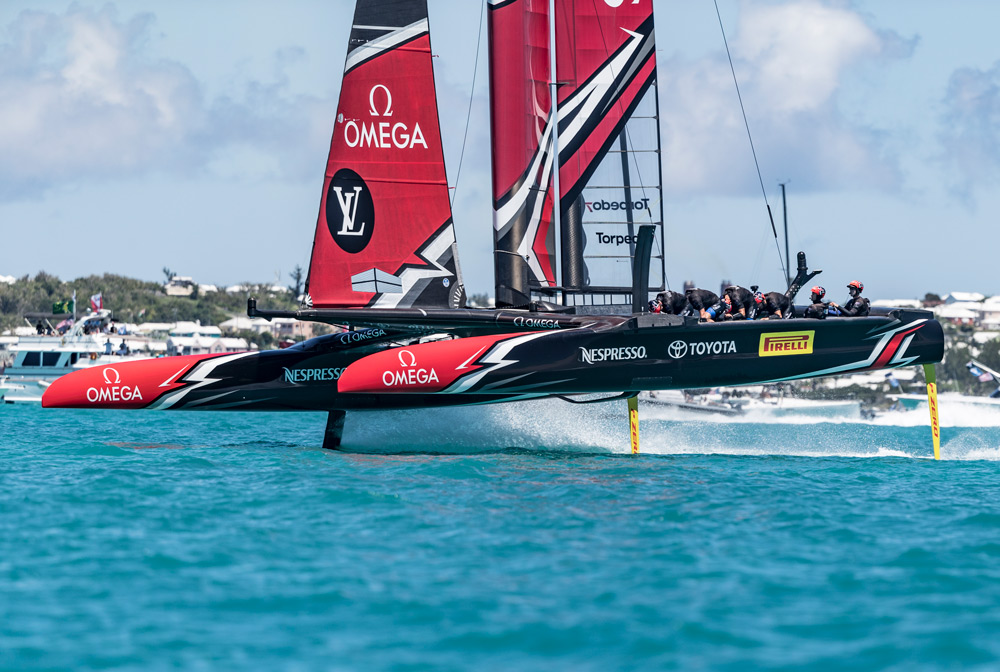 Skipper and tactician Glen Ashby came up with a mainsail control system which uses a hydraulic system which allows him to regulate the twist, a more difficult word to translate than the jib angle, rather than a traditional job, which all other boats keep as a memento. This changes the conditions when the boat’s skidding has to be controlled as the wind changes direction. This is similar to what the vang does on traditional boats. Another big advantage the Kiwis had was the option of being able to use four foil settings rather than two, which the other teams were limited to. Regulations allow for four foils (two pairs) to be built, with a 30% variation in their surface. The Kiwis created a detachable foil tip system which the other teams did not use, making the system and boat tuning more flexible depending on the wind. This is key to performing as well as possible. Tuning depends on the strength of the wind: short pins with stronger wind, as support is stronger with a higher speed; long pins with little wind so you can keep flying. Meanwhile, a radical solution was used to tackle the issue of flight. Flying really means managing to move in three dimensions instead of two. Left-right, up-down. To perfect this, the Kiwis turned to a drone expert, a photographer who was able to fly his drones in front of their boats some fifty centimetres above the water. With his help, the technicians synchronised the on-board telecamera data so they were able to gain a better understanding of every event, thereby learning to steer. This is another example of how these boats have become part of the “video game” generation, and how the helmsmen have the reflexes and techniques that allow them to steer these boats. It also takes a lot of talent for sailing, of course.
The Trophy, in its Louis Vuitton suitcase, flies to New Zealand to return to its place in the room on the first floor of the Royal New Zealand Yacht Squadron. For this little country, this is a question of economics as well as sport; the nautical industry is worth a billion euro and is considered one of the best industries in a strongly agricultural economy. When it lost the Trophy in 2003 it was a hard blow, and even the Government underestimated this. Now the Kiwis will do everything they can to keep it in the City of Sails for a long time.