Formula 1® is the second most popular sport in the world, and while styles and technology have advanced, one common denominator remains: Pirelli tyres

Home race From 1950 to today Pirelli has been there

The photo looks like something out of an art history gallery. A pristine expanse of open space. A slice of the crowd can be seen in the distance. Queen Elizabeth, just 24 at the time, is posing together with the drivers, who are about to take on the very first Formula 1® world championship. She was barely an adult, and the drivers—ranging from Juan Manuel Fangio (Argentina), who would go on to win that first race, to Nino Farina (Italy), who would go on to win the title that year—were all terribly old in comparison.

Once a military airfield, Silverstone had been transformed into a racetrack thanks to the hard work of individuals looking hopeful towards the future, having just left World War II behind them. It was here, at just over an hour off the motorway north of London, that the Formula 1® world championship began. The images from that Saturday, 13 May 1950, were primarily in black and white. Along side Elizabeth, in their regal poses, were also King George VI, Princess Margaret, and the Earl and Countess Mountbatten, all united in a ceremony of fleeting significance, symbolising a sensation that no one, that day, could have felt, that this F1® would be here to stay— and grow beyond their wildest dreams to become what it is today: the second most popular sport on the planet, at least based on television ratings, which place it in second spot behind World Cup football and fighting tooth and nail with the Summer Olympics.

What remains of that nascent Formula 1® today? Ferrari didn’t actually arrive on the scene until the next race, eight days later in Monte Carlo. They were absent at Silverstone, but since then have always been a feature of Grand Prix racing to become the universal symbol of F1® around the world. At Silverstone on that 13 May 1950, though, the heroes were Alfa Romeo, Talbot, Mazerati, and Gordini, none of whom are a part of Formula 1® today.
Pirelli, on the other hand, was at that first Silverstone, and we’re here today, the only tyre manufacturer able to boast such a long history in motor racing. As we approach the 2015 Monza GP, Pirelli has racked up 130 wins. And only Pirelli’s history of success encompasses such a range of styles in racing and technology over time. To cite just one example, throughout the first decade of the F1® world championships, they raced in single-seaters with ultrapowerful engines at the front of the vehicle, making for a heavy, long-nosed race car that the drivers had to fight to steer from the back, constantly battling with understeer, elbows outside the car as they cling to this huge, heavy steering wheel, with no power steering to help them. These were the days of Alberto Ascari and Fangio, adding to the parade of Italian world champions led by the aforementioned Farina. Indeed, it was Ascari in his Ferrari that first took Pirelli to victory. Fangio completed an incredible five world championships with Alfa, Mercedes, Ferrari and Maserati, but in the first and last of his titles, the common denominator was his Pirelli tyres.

At the end of 1957, though, Italian tyres left Formula 1® to return after nearly a quarter of a century, only to find that technology had been revolutionised—to say the least. Front-engine vehicles were a thing of the past, while turbochargers and electronics were the new order of the day. Performance levels were rising fast, approaching the elusive milestone of a thousand horsepower in qualifying and with acceleration and drifting that could tear the tyres right off of the car—tyres which had also, in turn, headed down an entirely new path. Pirelli would give its new high-performance racing tyre a new name that was to go down in history: the P Zero. It was a concept, more than a product or line of products, stiffer and with a lower profile for the utmost in steering precision, and featuring compounds and construction that ensured grip in all racing conditions. P Zero soon began rewriting the history books, both in high-performance road racing and in rally racing on the most extreme prototype vehicles.

The ultimate result of all of this advanced technology, which had been optimised to meet the needs of smaller wheels that required tyres with anything but a low profile, were the F1® tyres with which Pirelli won throughout the mid-80s (Piquet with Bradham, France 1985; Berger with Benetton, Mexico 1986). The key? Maximum performance and endless tyre life. With the F1® Circus returning to Mexico City that November 1986, after a 22-year absence, Berger took Benetton to victory for the first time without ever stopping for a tyre change, catching all of his fiercest competitors totally off guard. 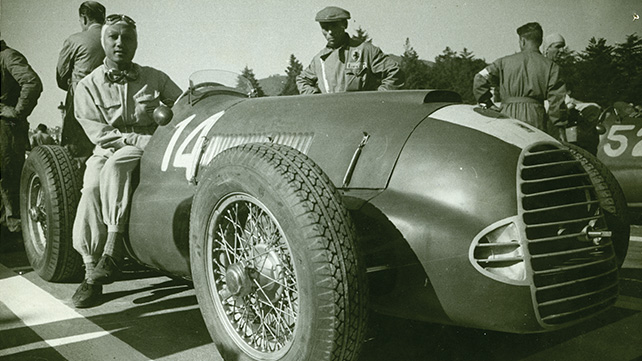 Gone again, back again. Pirelli returns to Grand Prix racing at the end of the 1980s, betting again on low profile with small teams and young drivers, but with innovative technology that went against contemporary trends. The company’s soft-compound tyres prove unbeatable in qualifying, and with the competition reaching their limit on rapidly decaying tyres, the Pirelli tyres are just ‘scraped down’ and regain their maximum grip in a heartbeat. In the wet and at cold temperatures, these compounds prove unbeatable, and this technical revolution owes a great deal to Jean Alesi, that young hopeful who, in 1990, dared battle tyre to tyre along side McLaren and Williams, he in his little (in terms of budget) Tyrrell, taking on racing legends of the calibre of Senna and Mansell. In Canada in 1991, Pirelli took victory with Piquet and Benetton and second place with Stefano Modena and Tyrrell. At the last race in Australia, a torrential downpour knocks everyone to their knees, everyone except Piquet and team Benetton, who—on Pirelli tyres—manage to start clawing back 3-4 seconds a lap, but Senna, who had just one his third world championship and was leading the race in his McLaren, throws up his arms for all the world to see, forcing race directors to stop the race after just 14 of the 81 laps scheduled. Piquet would have won, bringing a fitting end to that race that was to mark another Pirelli exit from Formula One.

Which brings us to today. Gone are the naturally aspirated, 10-cylinder engines from the early 1990s, replaced by the hybrid turbo engine that can once again approach peaks of 800hp, and extraordinary aerodynamics make it possible to reach top speeds of over 370km/h. And Pirelli is here, in our fifth consecutive single-tyre championship, greatly proud of our technological and racing achievements and anxious to see the direction for the future—in terms of both technology and regulations—in this Circus of which Pirelli has been a part in nearly all of its forms dating all the way back to that distant, faded memory of 13 May 1950.

Driving safety on the wet? Yes, with the Cinturato Blue Wet