As well as the month of Saint Valentine, February has become the month of new car launches, as manufacturers reaffirm their love for Formula One by unveiling the latest models

These F1® launches have been taking place all over Europe, both in reality and online, in order to show as many people as possible the challengers that will do battle for the 2016 Formula One championship. 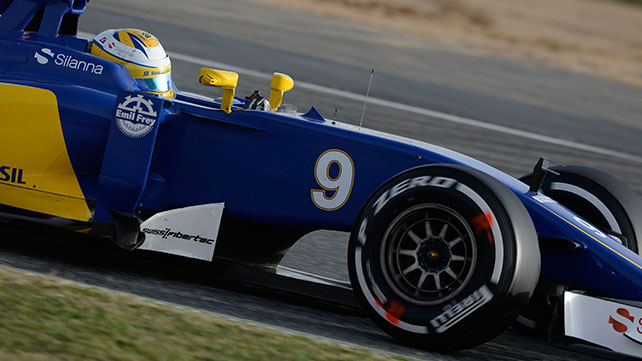 Some teams – such as Renault and Red Bull – have chosen just to showcase their 2016 liveries, with fine-tuning of the chassis going on right up until the final days before the opening test at Barcelona. For both these teams, the colour scheme is part of the key story: Renault revealing an interim black and yellow livery (not dissimilar to that of the Pirelli test car from a few years ago) to mark the return of the French manufacturer to F1® in a manufacturer capacity.
Red Bull, meanwhile, launched a bold new look in London: a matt blue colour scheme replacing the look that the team has worn since it entered the sport in 2005.
Some teams are opting for a simple roll out before testing, rather than a full-scale media launch. One of the most eagerly anticipated new arrivals is the Mercedes F1 W07 Hybrid, which took to the track at Silverstone, England, for the first time last week as part of a promotional event. Although it doesn’t look radically different from its dominant predecessor, Mercedes has pursued a policy described as ‘optimisation everywhere’ in order to build on the excellent results of recent years.
But other teams are looking to challenge. In particular, the brand new Ferrari SF16-H – which also sports a new colour scheme that hints at the glory years of the 1970s – features improvements to the engine, suspension and aerodynamics. As technical director James Allison said, speaking at the team’s launch in Maranello: “all our hopes are in this car.”
Other new cars to break cover include the 2016 McLaren-Honda MP41, which continues the ‘size zero’ philosophy introduced last year. The British team chose an online launch for their latest machine, where multiple world champion Fernando Alonso said that: “the whole car is beautiful.” After a 2015 season that fell considerably short on expectations, this is a crucial season for one of the most iconic teams in Formula One: hopefully it will go as good as it looks.
Another legendary name – Williams – was the very first team to launch its definitive 2016 car by releasing photographs of the FW38 just hours before the Ferrari launch on Friday: proof that the competition between rival teams is as intense off the track as it is on it.
The suspension on the Williams FW38 is completely new, designed to help the tyres make the most of the mechanical grip on offer. There are also aerodynamic improvements, which the team says have been designed to address their weaker points from 2015.
What’s fascinating about launch season is the fact that there are so many different solutions responding to exactly the same challenge. But despite all this diversity among car and engine designs, one thing remains the same at every grand prix: the Pirelli tyres. The car that finishes first, as well as the car that finishes last, has exactly the same opportunities when it comes to tyre choice and performance.