The secrets, thrills and curiosities of the recently completed F1® season depicted by the numbers in Pirelli infographics 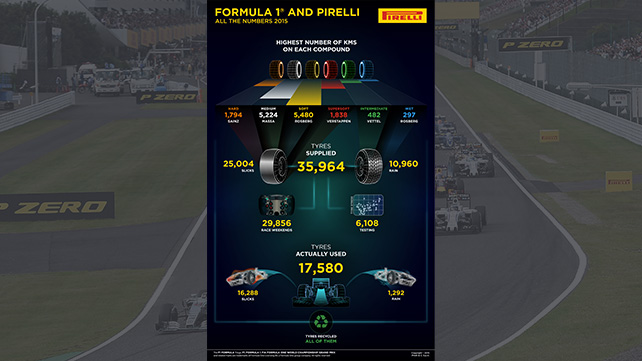 It was a year of living dangerously, racing at speeds of over 300 km/h, nothing separating us from the tarmac below. In fact, our challenge was to ensure that nothing did come between us and that tarmac, despite the bumps and holes and all sorts of other deformities in our path, because if the almost chemical bond between us were to weaken, things would get very dangerous indeed.

“We” are the Pirelli P Zero Formula 1® tyres, hurtling along on F1® single seaters in a union of metal and carbon, of moving parts and of liquids and gas—a technological labyrinth ruled by the mind and body of a man with the singular ambition to squeeze every last drop of speed out of this tangle of engineering. We, the tyres, are the only thing uniting this rocket on wheels with the real world, the last link with the ground, doing all we can to support the vehicle through all its tribulations as it accelerates, turns, breaks, attacks and defends.

Around the World with Four of a Kind

It’s all been about the number 4—four tyres and four compounds for our range of dry-weather tyres, called “slicks” for their lack of any of the blocks and channels that define a tread pattern, in an effort to achieve maximum grip at all times—and this is how the recently completed 2015 season went for us.
After somewhat fruitless testing in Spain in January and February due to the cold, the new P Zero range actually debuted in Australia stronger than we were last year. Along with a brand-new supersoft compound, we also boasted a new, more resistant structure for the rear to deal with the higher performance of the 2015 cars and their increased aerodynamic load. The hybrid engines (introduced in 2014) may be more powerful, but the technicians and race teams have also learned how to better handle this power, optimising aspects such as the violent torque of the paired engines so well that, at times, drivers say they should have gone with even softer tyres.
It all began in Melbourne, an unusual race over city streets, a race with fast sections, but on asphalt used for the traffic of every day. Medium and soft compounds were to be used on that day, and it would prove to be the most used combination throughout the championship (at a total of nine races). Just to give you a general idea, we hit the track four times (in Malaysia, Spain, the UK and Japan) in a hard-medium formation, as compared to five times in this formation last year, and in a soft-supersoft formation six times (in Monte Carlo, Canada, Austria, Singapore, Russia and the Emirates). This same formation occurred six times in 2014, as well, but one was in Germany, which wasn’t on the calendar this year and so was replaced by Russia this year. With one less race being on hard tyres and one more on supersofts, the shift to higher-performance tyres compared to 2014 is clear, and yet drivers often would have preferred even softer tyres for even greater performance and greater potential for more aggressive racing. And who’s to argue with a Formula 1® racer?

A Season of Stability

In the face of it all, the 2015 season, like the season before it, rolled along in complete control, with the tyres maintaining stability and total reliability even as weather and track conditions changed. There was, however, one exception, and it came in Belgium.
The Spa-Francorchamps circuit, with its seven kilometres of hills and dales and some of the fastest sections of the entire championship, is one of the most extreme racing challenges. The Eau Rouge compression, between the downhill past pit lane and the infamous Raidillon uphill, is enough to take even the great champions to school with its sharp left-right turns and vertical accelerations that triple (or more) the weight of both car and driver for a few tenths of a second. Not to mention the stress this puts on us tyres, as you can well imagine.
It was coming out of this compression, on extremely worn tyres and with the aggression of a racer fighting for a podium position, that Sebastian Vettel fell victim to a blown rear tyre at just a few laps from the finish. The same thing had also happened, on Friday, to a rear tyre on Rosberg’s Mercedes. A highly in-depth post-race analysis revealed that the Spa circuit had been riddled with the sort of debris that wreaks havoc with tyres like us. Throughout the weekend, there were over sixty punctures, whereas there are rarely more than three punctures on any given weekend. Sixty is most certainly a huge number.
But this was the only shadow cast on an otherwise successful 2015 season. Today, with changes in structure and the new ultrasoft compound on the way, the P Zero range is truly taking shape, ready for the 2016 season and beyond, given that Pirelli has just signed an agreement to remain on the F1® circuit through 2019. Racers, start your engines!

Formula 1®: moving the world for 65 years