F1® tires reviews: behind the scene

High speeds and circuits: that's how legions of engineers all over the world put their calculations, designs, ideas and concepts to the strictest test 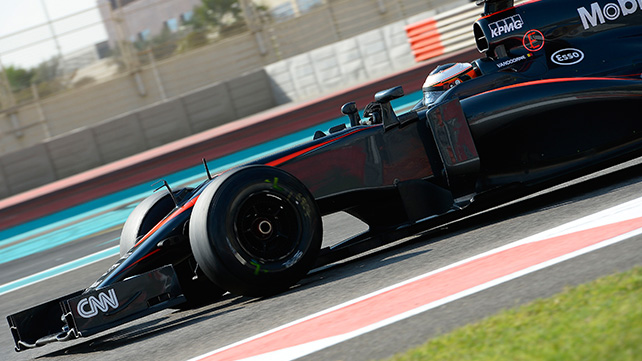 test1
tɛst/
verb
gerund or present participle: testing
take measures to check the quality, performance, or reliability of (something), especially before putting it into widespread use or practice.

There’s a reason why the dictionary assigns this definition to the word ‘test’. Before even suggesting that it might mean to ‘try out’ or ‘rehearse’. And yet, in many ways, ‘rehearsing ’ actually captures the essence of what testing is all about.

In the automotive world, ‘testing’ carries almost the same weight as the words ‘designing’, ‘making’ and ‘assembling’. It’s an integral part of the whole process that is the culmination of all those brilliant efforts up to that point: the final verdict of the road.
And this destiny is even more implacably direct for a tyre, which whether on gravel, or asphalt, or any other surface is the only element of contact between any vehicle – car or motorbike – and the ground.
This does not mean that it just has to provide the maximum comfort. As speeds and the difficulty of the surface increase, a tyre also has to ensure that the laws of physics do not exceed the parameters of safety.

As time has gone on, the whole concept of how tyres are tested has made enormous steps forward. Laboratory testing is now carried out with mathematical precision, allowing usage conditions that way surpass any realistic limit to be carried out without any constraints.
But then the insidiousness of one particular surface can come into play, or variations in climate, or even a particular driving style: all factors that mean the road itself is the ultimate arbiter.

And now, technology has even invaded traditional outdoor testing. Technology has driven outdoor testing onwards, making it increasingly specialised, in the pursuit of results that have to be the ultimate in terms of value when it comes assessing performance at the limit of what is and what isn’t possible.
And that is why this object that we call a tyre, which can be so easily influenced by outside factors, has to overcome performance and durability tests that range from the heat of Africa to the frozen cold of the 66th parallel. And given that even Father Christmas’s house (located on that latitude) doesn’t see any snow and ice in July, the test calendar for cars – and tyres – then moves on to places separated from the South Pole by just a sliver of ocean.

Not for nothing did Pirelli launch its Sottozero product about 10 summers ago in the height of June at Ushuaia, the southernmost part of Argentina. And more recently, the final tenth of performance from the Night Dragon motorbike tyre was found during a ride from Alaska to Miami; while the biggest demands on the Scorpion Sync were produced in another extreme test: from the North Pole to Dakar. But a test bench of extreme climate isn’t enough. Speed is needed as well, and only the open road produces this in all its variations.
One of them is competition. One of Pirelli’s most precious technical definitions belongs the motorsport division, which is described as  “the biggest possible open air research and development laboratory.”
In a nutshell this recognises that laboratory tests can highlight certain areas of performance or deficiency, within the limits of physics and mechanics, but hide others. The road – or even better, the track, with the final judge being the stopwatch – provides the ultimate answer. It finds the limit beyond which, in the case of a tyre, grip is gone. And from there, the accident, the collision, the shock. The scenarios nobody wants to happen. High speeds and circuits are the measure against which legions of engineers all over the world put their calculations, designs, ideas and concepts to the strictest test.

Today, at the end of the 2015 season, this is how an important Formula One future is being prepared. Due to cost, the pinnacle of motorsport has recently throttled back on real tests, meaning that any actual on-track debut tends to be something of a leap into the dark these days.
While a few years ago, in-season testing was exaggerated (some teams managed to rack up 40,000 kilometres outside of the grands prix) today designs go directly from the drawing board to the start of their first race. With all the surprises in store that can be expected. Which, when it comes to making tyres, is particularly absurd.

The continual increase in performance from Formula One cars would really require tyre testing to take place during the season as well, but the rules now impose a freeze on testing from one winter to another – and without tests that are able to reveal any detailed and in-depth results. However, in a small way, the tide has recently turned.

Pirelli has asked for a specific tyre test to be held and this happened in Abu Dhabi on Tuesday 1 December: the same venue that have hosted the final grand prix of the season just two days earlier.
The test took place in particularly demanding conditions, with the heat representing the main challenge to overcome, as well as an exacting track layout, meaning that the 2016 P Zero Formula One tyres can begin to take shape within proper parameters.
The regular championship cars and drivers were used, so the extreme and realistic conditions called to be assured. As a result, Pirelli has finally been able to refine its weapons to head into its sixth season of Formula One in the modern era.