Nothing is faster than F1®; nine years is a long time to stick around! Yet there’s no lack of stories of such staying power, like Pirelli tyres

Home race F1® and Pirelli: standing the test of time

Formula 1® is all about speed, so why should we expect time at F1® not to fly, too? Everything comes and goes at the speed of sound as streaks of colour disappear over the horizon. We may have the impression that the legends of the past were timeless and ever present, but when we take a closer look, we see them for what they were—blinding flashes of light; here one day and gone the next.
Pirelli’s first three-year term in Formula 1® began in 2011, and our second will becoming to an end with the 2016 season. This is to be followed by three more years, through 2019, in accordance with an agreement signed in October. In the fast-paced world of F1®, these nine consecutive years for Pirelli on the Grand Prix circuit are beginning to look like a significant era, so it’s only natural to wonder how many times such a feat has been accomplished in the history of the Circus.
Let’s start with the longest legacies in the sport, relationships that we now think of as the history of Formula 1®. First of all, there’s Ferrari, which competed in the inaugural world championship in 1950 and has only missed a handful of race weekends since. Then there’s Monza, the speedway that has hosted every Italian GP except the 1980 edition when a battle of sports politics took the event to Imola, which then became the San Marino GP until 2006. 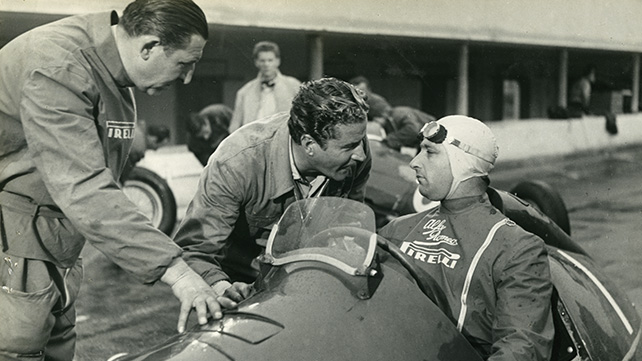 The era of the Honda turbo engine
These are the cornerstones of 66 seasons of world-championship racing in Formula 1®, but there are surprisingly few examples of such lengthy relationships in the sport. Senna, for example, 21 years since his tragic departure, may seem like he was around forever, and yet he was a part of Grand Prix racing for just ten full seasons, his eleventh being cut short at the third race of the 1994 season in Imola. The era of the Honda turbo engine, which owes its best moments to Senna, ran from midway through the 1983 season and lasted nine more full seasons before coming to an end in 1992. The company returned as an engine supplier from 2000 to 2005 before becoming an actual constructor from 2006 to 2008. Even the legendary Juan Manuel Fangio, the first great champion with five world titles in the 1950s, competed for just seven full seasons, although not even consecutively (having missed the 1952 season), plus the odd race in 1958.

Tyre suppliers, few have traversed the ages
As times have changed, so has the overall commitment of a GP season, given that a world championship had at most 16 races per season through 1994, as compared to 19 for the season that has just come to an end and the 21 races scheduled for the 2016 season. And when it comes to F1® suppliers (which are often more like partners in research and development, as is the case for Pirelli today), their commitment spans a great many eras.
In terms of tyres, Goodyear holds the record for most seasons, having been on the scene non-stop from 1965 to 1998 and posting a record 368 wins, many of which as the sole tyre supplier. Also worthy of note are Bridgestone’s 13 seasons in a row from 1998 to 2010, but if we add the 1950 to 1957 seasons to the nine the company is currently working on, Pirelli certainly deserves its place in history with more seasons than other brands often associated with racing history, including: Firestone and its seven seasons from 1966 to 1972; Continental and Englebert with a handful of GP seasons each during the 1950s; or even Michelin, which has amassed a total of 13 F1® seasons over two separate periods, from 1978 to 1984 and from 2001 to 2006.
So it is that the P Zero line is about to embark on the second half of its nine years as a F1® partner in the modern era. Pirelli was there when the Grand Prix became a world championship back in 1950, and the company is here again today, spanning an era of historic proportions and nearly on a par with Ferrari and with the Italian and British GPs.

Miles and meals: a lunch with Pirelli and Formula 1®