Driving safety on the wet? Yes, with the Cinturato Blue Wet

2016 Formula One season is 'round the corner. And the Cinturato Blue wet are the key player of the tests on the Paul Ricard circuit

Home race Driving safety on the wet? Yes, with the Cinturato Blue Wet 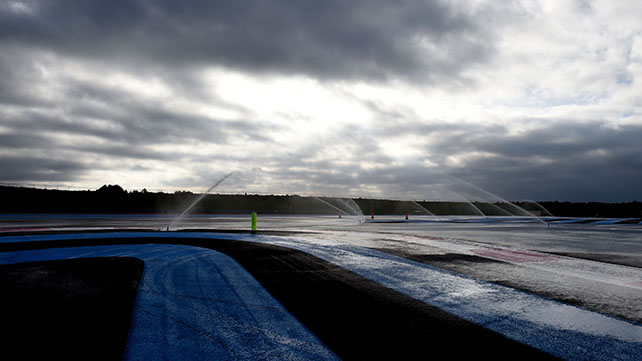 The 2016 Formula One season is almost here. The teams are hard at work fine-tuning their cars before they hit the track for the first time in Barcelona for pre-season testing in February, and Pirelli, too, is putting the finishing touches on its range of tyres for the 2016 Championship.
The company’s slick tyres have already been tested, at Abu Dhabi after racing in November, and now it’s time for Pirelli engineers to put the wet tyres to the test. The Cinturato Blue Wet, for full-wet conditions, is to be the focus of attention of tests at the Paul Ricard circuit near Le Castellet, France, where three F1 teams—Ferrari, McLaren and Red Bull—will be on the track.

The track, which got its name from the famous Frenchman who invested “Pastis” (a French spirit and aperitif), features an irrigation system to simulate the various wet conditions that can be encountered during the Formula 1 season, from the torrential downpours of Malaysia to the incessant rains of the UK. This makes it possible to keep the track conditions consistent between runs, which is essential in order to make comparisons between different tyres and different cars, because, over the course of the two days, the drivers for Ferrari, McLaren and Red Bull will be testing various prototypes of full-wet tyres in order to select the one that could be used for the 2016 season.
The Paul Ricard track will be used to test various combinations of compound and tread pattern, which will be evaluated both by Pirelli engineers and by the drivers themselves, as this subjective feedback is an essential part of the testing process, even more so than for dry tests. When testing tyres in wet conditions, driver feedback is a crucial complement to the data gathered by telemetry and sensors.
Pirelli has conducted extensive testing of wet tyres in the past, frequently using the Paul Ricard circuit, as well as, for example, the Abu Dhabi track, where Pirelli conducted wet testing after dark for the first time in Formula One history. And yet never before has Pirelli had the chance to develop tyres for wet conditions on actual F1 cars and, above all, with official F1 drivers.
At Abu Dhabi, testing was done with Pirelli’s test car, a 2009 Toyota driven by Pedro de la Rosa. Pirelli had also gone to the Paul Ricard track for prior wet testing with the same Toyota and their “old” Renault test car.

The equation that Pirelli engineers will be seeking to solve on the Paul Ricard tarmac is this: + grip - aquaplaning = entirely new compound, optimising the tread pattern and going for greater crossover between the full-wet and intermediate tyres.
To find the solution, the Pirelli team has put together truly packed schedule of tests. The three cars will be on track from 9:00 in the morning to 5:00 in the afternoon without taking a lunch break, but this isn’t because Pirelli engineers are sadistic. It’s a necessity due to seasonal factors because, as evening falls, so do the track temperatures, making the conditions too different from those that will be encountered during the season.
On sunny days, the significant change in temperatures also makes it possible to assess how the compounds behave at a wide range of temperatures. Of course, it won’t be possible to replicate the exact conditions seen in Malaysia, but the temperature spectrum could be considerably vast!

Despite the fact that only three cars will be involved in testing, the Pirelli team on track will still be 30 members strong, including on-track engineers allocated to the three teams, tyre fitters, heads of development, and material experts.
On each of the two days, Pirelli technicians will be gathering a mass of data on temperatures, tyre pressures, and the grip of the various solutions. This data will then be analysed and sent to Pirelli’s headquarters in Milan, where the “simulations and data analysis group” will be tasked with processing this data and comparing it with the driver feedback in order to find the solution to that challenging equation above.