With Pirelli having started its pre-season testing programme, here a closer look at the history of Circuit Paul Ricard, the host for the opening two-day wet weather test

Constructed in 1969 with the financial backing of drinks magnate Paul Ricard, the circuit went on to be the home of the French Formula One Grand Prix, MotoGP and the 24-hour Bol d'Or motorbike race, as well as host various GT and sports car events. Mild winter weather conditions and up-to-date facilities, as well as the ownership of a certain Mr Bernard Ecclestone, have made Circuit Paul Ricard a popular off-season testing venue. 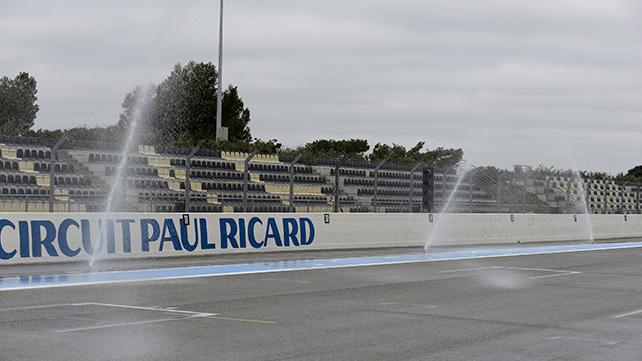 Located in Le Castellet, near Marseille in southeast France, Circuit Paul Ricard officially opened in April 1970, with 2-litre sports cars providing the maiden race action. It didn’t take long for the circuit to assert itself as the leading venue for French motorsport, securing the French Grand Prix and hosting it 14 times between 1971 and 1999.
Innovative facilities made it one of the safest motor racing circuits in the world of that era, with its initial 5.809-kilometre, 14-turn Grand Prix configuration boasting expansive run-off areas. It was no easy ride however, as the high-speed right hander of Signes at the end of the mile-long Mistral straight delivered a tough test for the elite of drivers and machines alike.
Keke Rosberg holds the race lap record on the long circuit thanks to his time of 1m39.914s from 1985 on board his Williams-Honda, while during qualifying Swiss driver Marc Surer set what was at the time the highest speed recorded by an F1® car at 338kph in his turbo-charged Brabham-BMW. Nelson Piquet won the 1985 race on Pirelli rubber, recording Brabham’s final F1® victory.
Serious accidents that year for Ayrton Senna and Nigel Mansell, as well as the death of Elio de Angelis in 1986, prompted modifications. A switch to the shorter Club layout followed, as the track developed some of the best French drivers in history, including four-time world champion Alain Prost.
Prost was victorious at the track on four occasions (1983, 1988, 1989, 1990) and became one of six drivers who went on to claim the drivers’ title in the same year they had won the French Grand Prix at Circuit Paul Ricard. When the F1® Grand Prix switched to Magny-Cours ahead of the 1991 season, only limited international-level car and motorcycle racing occurred until a much needed investment boost came in 1999.
The venue was purchased by the Excelis Company, owned by F1® supremo Bernie Ecclestone, and an extensive redevelopment programme followed. Many corners were re-profiled and the Bendor chicane removed, while the introduction of Tecpro safety barriers and a striking new blue, black and red asphalt run-off system went a long way in earning The 2007 First Centre of Excellence award, presented by the FIA Institute for Motorsport Safety.
After a 10-year hiatus and re-naming to the Paul Ricard High Tech Test Track, the circuit re-opened to the public in 2009, and has gone on to host events such as World Series by Renault 3.5 and 2.0, GP2, European Le Mans, Blancpain Endurance, World Touring Car Championship and World Endurance Championship testing. The development offers an extensive 167 possible configurations ranging from 826 to 5861 metres.
The recent renovation work has once more put the Paul Ricard Circuit on the map as one of the most modern motorsport facilities in the world, boosting hopes of a possible French Grand Prix return in the future. For now though, it’s Pirelli’s first European wet-weather test venue, with sprinklers used to produce ideal conditions for the Cinturato tyres.