From Adelaide to Melbourne: the Aussie GP that made history

When Formula 1® landed here for the first time in the mid-'80s there were virtually no Grand Prix events in Oceania or in the entire Far East, for that matter. Except for Japan, where F1® had raced in the shadow of sacred Mount Fuji in 1976 and 1977, the tours of the European championship out of home continent amounted to 23 in South America (swinging between Argentina and Brazil also because of dodgy economics and unsavoury political balances), 8 in Mexico, 18 in Canada and 48 in the USA, including the Indianapolis 500, which had been a Formula 1® championship event for the first eleven editions. There had been races in Africa too: 21 times in South Africa even during the darkest years of the apartheid era and one in Morocco back in 1958. 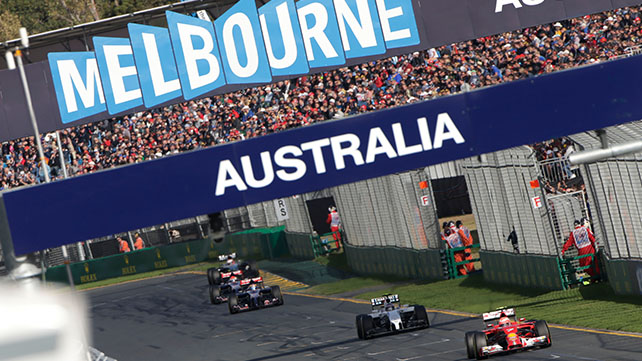 THE FIRST AUSSIE GRAND PRIX IN ADELAIDE
In 1985 Formula 1® was looking for new vital spaces and new prospects to attract sponsors increasingly more interested in the global marketplace and to create new TV audiences for an area still experiencing constant growth. So it was the turn of Australia but the choice did not fall on an Australian metropolis: Sidney and Melbourne had nothing real or potential to offer. Instead, the agreement was sealed with Adelaide, home to a million or so souls on the ocean facing Antarctica. Setting aside the notion that the location was chosen for historical reasons (after all, Adelaide was named after the wife of William IV who was King of the United Kingdom and Hanover in the 1830s) one must believe that Bernie Ecclestone's sudden interest was commercially motivated. Southern Australia has good money to spend and wanted a long-term programme: that was music to the GP boss' ears. The race would be held on a real street circuit but with its 90-degree bends and no changes of level it was a far cry from Monte Carlo, the street circuit par excellence. It was more similar – but much less glamorous – to the one laid out in Long Beach and that had kept F1® in California for just eight years before losing it at the end of 1983 to a whirlwind of American circuits (Las Vegas, in a hotel parking lot no less, Detroit, Dallas...) but never succeeding in making Bernie tie a long-lasting knot with North America.
Between the kerbs and along the streets of Adelaide lined by houses decked out as tourist pubs the speed was slow but the championship kicked off with a bang. The race was held on November 3, 1985 in full-blown Australian summer and was Niki Lauda's final farewell to F1® as driver. His McLaren even took the lead and the three times champion was anticipating to celebrate his retirement with champagne. Unfortunately, a technical fault would drive him off the road and serve the first Grand Prix down under to Williams driven by Keke Rosberg, who was to take his place on the McLaren team the following season. Rosberg was at the top in 1986 as well, until a puncture forced him out at 16 laps from the chequered flag. That tyres were an issue is clear, but Team Williams ignored the obvious and poor old Nigel Mansell, well placed and sailing calmly towards his first world championship title, endured the same disastrous fate as Rosberg with a resounding bang right in front of the pit lane. He avoided crashing into the wall and was overtaken by the McLaren driven by a now somewhat demurring Alain Prost, who found himself being named world champion for the second time without needing to put up a fight.

THE BATON PASSED TO MELBOURNE
Races in Adelaide were seldom boring. The 1989 Grand Prix was held under the hammering rain and was won by Williams driven by Belgian Thierry Boutsen. Two years later, there was another downpour. That was Pirelli's last race before retiring at the end of the season. The Benetton with Pirelli tyres flew on the flooded bends of the circuit: Nelson Piquet caught up with leader Senna at a rate of two, three, four seconds per lap and the prospect of celebrating another retirement under a champagne shower was developing. But Senna had something else in mind. Slowing down lap after lap, TV viewers worldwide saw him gesture eloquently towards the race managers. Possibly intimidated by the attitude of the fresh three times champion they unexpectedly dedicated to end the race. Only 14 of the 81 scheduled laps had been run: those wet 52 kilometres make this Grand Prix the shortest in Formula 1® history. The record still stands today. Adelaide would bid farewell to F1® at the end of 1995. When they were closing the cargo boxes the question on everyone's mind was whether it was really worth it: the new championship would kick off four months later in March 1996 not far away on the new but very different street circuit of Melbourne. That is another story and one that is still panning out today.

Formula 1®: here is how the racing drivers train