Yas Marina: 21 curves and 5,554 meters of extension, is much more than just a Formula 1® circuit 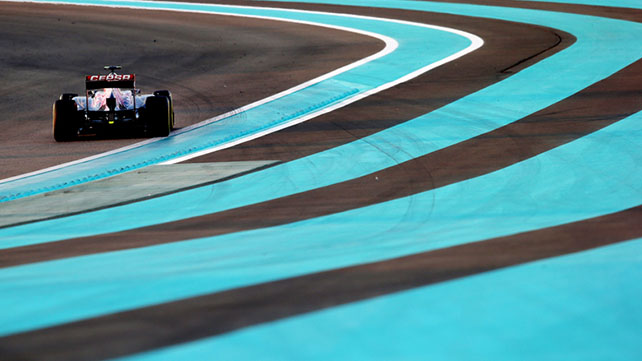 If you were to cross into the stratosphere and happened to see a bright red spot on planet Earth, do not fear, it is just the world’s largest amusement park ever. Even from thirty thousand metres up in the atmosphere, the giant red dome of Ferrari World is visible to the naked eye. Look a little closer with some assistance from a lens, and the largest Rearing Horse in history will also make an appearance.

Half way through the first decade of this century, the United Arab Emirates decided to make their entrance into the upper echelons of the motor world. Ferrari World, with all of its two hundred thousand square metres of theme park dedicated exclusively to the myth of the ¨Rosse¨ (Reds), was the first step, or at very least, the inaugural show stealer. Gigantism, luxury, extreme technology: under the eighty thousand square metre red awning visible from space one experiences all of this, accompanied by the desire for absolute supremacy.

Indeed, Formula Rossa, a rollercoaster that accelerates from zero to 240 km per hour in 6 seconds, speaks for itself. While Ferrari World made quite an impact on the racing world, the Yas Marina Circuit, located on the island that Abu Dhabi presents to the world as its most exclusive area, is actually the real star of the show. In fact, when Ferrari World came into being, the circuit that now hosts the final race of the International F1® season was already in the pipeline. Both developments were realized by Aldair Properties, the real estate fund behind Abu Dhabi, however, the scope of the Yas Marina project goes well beyond the automotive significance of its 21 curves and 5,554 metre development. A pioneering tunnel passage hosts the exit lane from the pits, and is a first in the racing world, as is the stretch of track that runs through the Viceroy Hotel, a true beacon of luxury and glamour for the whole area. Water in abundance is guaranteed by a state-of-the-art desalination plant that processes water taken from the sea, while a high-tech progressive illumination system ensures exactly the same level of light on track, in the pits and the paddock as night descends, making the Yas circuit a hyper-modern oasis of verdant green. The whole system is designed for maximum effect, with the stands, structures and colouration of the spaces beyond the track’s curves all created in perfect archi-star style. And all this is done with the maximum respect for the environment, with the the desert, only a few steps away, allowing for closeness, but not for profanation.