The scene is now set, after nearly 9000 laps in eight days split over two weeks

Home race A test as long as the Equator

That’s the total distance covered in F1® pre-season testing at Montmelo, north of Barcelona, during the last fortnight. So a bit of simple maths tells you that every one of the 22 drivers who took to the track (each driving for four days on average) covered more than six times the distance of the Spanish Grand Prix, which will take place in mid May as round five of the world championship. Looking closer, those 9000 or so laps equate to just under 42,000 kilometres in total – slightly more than the circumference of the equator. Or, if you prefer, 2.6 times the flying distance between Europe and Melbourne, where battle will commence for the 2016 title on Sunday 20 March. 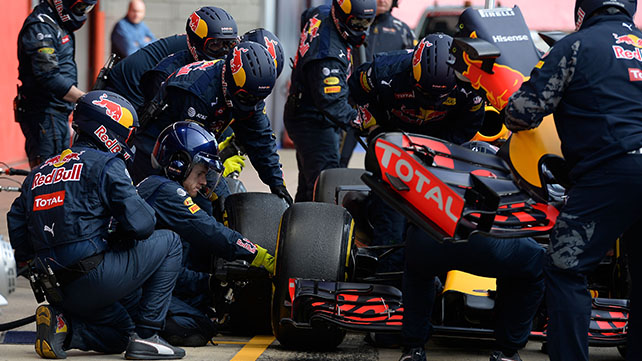 Australia is the main focus now: the first of 21 chapters, with the story only completed at Abu Dhabi in November, after eight grands prix in Europe and 13 long-haul events (assuming that nothing falls by the wayside as the result of a general economic crisis from which not even Formula One is exempt).
It’s a continuous peregrination, from the south to the east and then the west. Once the European season – pared down these days to a bare minimum – concludes in September, the circus visits the Far East, the Americas, and then heads south again. It’s a non-stop succession of take-offs and landings but above all of packing and unpacking cars and containers, computers and equipment: all the technical life-support systems without which modern Formula One would cease to exist.
Over the next week, these essential manoeuvres will assume a new degree of vital complexity. On Friday night, once the Barcelona test is over, a caravan of lorries will leave the circuit and head north into France.
Ferrari’s trucks will follow the French Riviera, through Nice and into Italy towards Maranello. Nearly all the others will make the long journey up through France. Not even the country’s strict circulation laws can stop trucks associated with sporting events from travelling: just as is the case for trucks transporting fruit and other fresh produce, which are also exempt from regulations that limit heavy goods traffic at weekends.
From there they cross the channel by boat or tunnel, and finally – most likely in the middle of the night between Saturday and Sunday – they reach their destinations in England, with most of the team bases located some way north of London.
Only then, away from prying eyes, does the real technology-fest begin. The cars used in the Spanish test were the first ones to be built in 2016 specification. So these are the ones that are the heaviest, and most susceptible to changes and variations.
As a result, those cars are unlikely to be sent to Australia: there will be newer and lighter chassis, produced after the cars used in Spain, destined for the first grand prix of the season. These newer cars will almost certainly be sporting a number of key evolutions as a result of the lessons learned in Spain. Before then, there is a mountain of work to get through on the technical side: thousands of parts to scrutinise and analyse, identifying even the tiniest traces of fatigue or wear. Only once this painstaking process is complete can all the teams head serenely to Australia.
That’s why the coming week, from 6–13 March, is going to be so important – or rather, just half the week. By Thursday night all the material needed for Australia is going to have to be stowed away in its containers, ready to go to the airport. From there, a lengthy flight awaits to Melbourne, with all equipment needed on site by Sunday 13 March at the latest.
These same priorities apply to Pirelli as well. This year, three tyre compounds will be available to each team at every race, as opposed to just two, which was the case until the end of 2015.
For a number of weeks now, Pirelli has known the total number of each compound to take to Melbourne, following the choices that each team has communicated to the FIA: the governing body of world motorsport. But the exact allocation for each car (and therefore each driver) will only be known at the beginning of the week before every grand prix.
So the work of preparing, assigning and distributing those tyres will be added to the list of tasks Pirelli’s engineers have to carry out following the Barcelona tests. And that’s why those tests were quite literally longer than the equator. But it’s still only the very first step of a long season that starts right now. In fact, it's started already.