Innovation, passion and engineering create 175 new tyre designs each year for a total production of 570,000 competition elements per season

Over the years motor sport fans, drivers and engineers develop a passion for a particular area of the sport. Many of them love single-seater, open-wheel racing. Plenty love the thrill of rallying. The attention of many is captured by the dream machinery found in GT racing.
As their passion manifests, these people push their chosen area of the sport further and higher. The technology develops, the cars become ever-more honed to the discipline they were designed for.
Yet championships as diverse as rallying and racing are still a part of motor sport. They still have many things in common. A driver is the obvious thing. Whether you’re watching a Formula One race, a GT race or a rally, there is a person in the car that translates what their eyes see and what their ears hear into what their hands and feet are doing. These competition cars also need an engine – and they all need tyres.

Pirelli supports over 250 motor racing championships around the world. It creates 175 new tyre designs each year and has six centres for research and development and five factories around the globe. There’s a total production of 570,000 competition tyres per season. And all of these are recycled at the end of every race.
Formula One is the most visible championship that Pirelli supplies. It attracts attention from a wide range of international media outlets, plus hundreds of millions of television viewers. Pirelli supplies this branch of the sport because it knows it will learn real lessons about tyre performance. These lessons translate to road car tyres, and that’s also true of other tyres that Pirelli makes for other championships. That’s why the Italian company is eager to supply so many racing and rallying series. It’s because it learns and is able to develop ever-better tyres as a result.
Immediately below Formula One is the GP2 and GP3 series. These are single-seat categories that support F1. The two series focus on developing drivers that could potentially run at the front of the Formula One World Championship. Indeed, F1 World champion Lewis Hamilton and his Mercedes AMG F1 team-mate Nico Rosberg are both former GP2 champions.

Pirelli’s role in these two series is to introduce the challenge of running different tyre compounds to these young drivers. If they reach F1, they would have to cope with running two tyre compounds – which would vary in terms of softness and durability – across each F1 grand prix weekend. Therefore in GP2 the 26 drivers each run two tyre compounds across a race meeting. In GP3 they run one compound across each weekend but this will be either a soft, medium or hard compound. So the tyres they run on, and how the car performs on the tyres, will vary from race to race.
Some young drivers will get their first taste of racing a car on Pirelli tyres as soon as they step up from karting. Formula 4  was relaunched by the governing body of international motor sport, the Federation Internationale de l’Automobile, in time for the 2014 season. Pirelli is the exclusive supplier for national F4 championships in the United Kingdom, Germany and Italy. This series is a crucial step in a driver’s career. Go-karts don’t have suspension, whereas cars do. So the interaction between the chassis, suspension and tyres gives the young drivers a feeling for the dynamic of competing in a car as opposed to a kart. 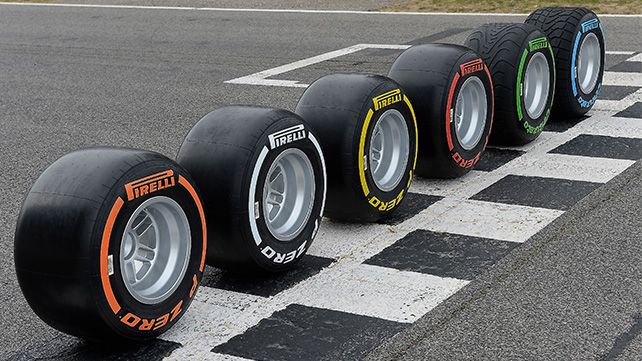 Pirelli builds very different tyres for different motor racing series. Often this means linking up with the manufacturers of some of the most prestigious cars in the world. This is frequently what happens in GT racing. Grand Touring has had a turbulent decade but now there are a plethora of strong championships that run nationally all over the world and other series that run across continents.
One of the most popular is the Blancpain GT series. A diverse range of cars, from McLarens and Lamborghinis to BMWs and Bentleys means spectators love watching these big cars race wheel-to-wheel. It’s the diversity of the races that presents a real challenge to the drivers and teams. The calendar is split into sprint and endurance races. Some of the events are 500 kilometres long. The Paul Ricard event is 1000 kilometres, and then there’s the jewel in the crown – the Spa 24 Hours. This race takes place at the legendary Spa-Francorchamps circuit in Belgium and it’s one of the toughest races in motor sport. A fast, flowing track combines with unpredictable and changeable weather to make winning an arduous task.
Alongside the Blancpain Sprint Series is the Blancpain Endurance Series. Whereas the Sprint championship includes both the sprint and endurance races, the Endurance series just has the three-hour endurance events, plus the 24 Hours of Spa. With a grid of prestige cars and professional drivers, the racing is gripping from start to finish. It’s not unusual for three-hour races to be won by a handful of seconds.
And there’s a lot of technology on the cars too. These are cutting-edge racing machines that require delicate understanding of their performance characteristics if the drivers are to get the best out of their equipment.

The Blancpain series are run for professional teams and drivers. Those that want to compete on a smaller budget have their own series to get stuck into: the Pirelli World Challenge. This championship runs 50-minute races in the United States and in Canada and is for production cars from Minis to Lamborghinis. Enormously competitive, it has a rich history. Pirelli is also the sole supplier in the ADAC GT Masters series, which runs in Germany, Austria and Holland. The eight-event calendar further showcases Pirelli’s ability to construct tyres that work in a variety of GT cars. It also links to Pirelli’s desire to help younger drivers to climb up the ladder in their chosen discipline.
Competing with such success on asphalt is not easy. Nonetheless, to compete at the top of rallying is surely another challenge altogether. Pirelli has a rich history in rallying, which is in many ways the ultimate test for a tyre manufacturer. Building tyres that work on ice, snow, gravel and Tarmac is a particular challenge and Pirelli’s engineers spend months searching for not just the best rubber compound for these surfaces, but also for the best tread patterns to enable the driver to grip the road in all conditions. Pirelli supplies tyres to teams in the FIA World Rally Championship and to teams in the Asia-Pacific and Chinese Rally Championships.
Pirelli is as comfortable building tyres for two-wheeled competition as it is for four-wheeled vehicles. Motorcycle racing is as big a business as car racing and Pirelli is the exclusive supplier for the FIM Superbike World Championship. Pirelli builds tyres for the FIM Motocross and FIM Endurance World championships too, further highlighting the engineering ability of the company and showcasing its willingness to adapt its tyres to a variety of strict parameters. The Italian firm also supplies the British Superbike Championship, and the Italian, German and French national championships.
In supporting so many championships, it’s inevitable that Pirelli’s reach will stretch throughout the world. It has a rich heritage in Europe and is also active throughout other continents.

In Asia it supports the Ferrari Challenge and the Lamborghini Trofeo. The Australian GT Championship is another series that has heavy support from Pirelli. Collectively, these series race across the Asian continent and into the Middle East too.
Pirelli’s racing activities vary in many ways. The company builds tyres for almost every type of competition car and ships these tyres to all corners of the world. Sometimes it has exclusive agreements with the biggest championships, at other times it is supplying a little-known competitor. But wherever it is, Pirelli’s aim is to supply tyres that will enable its teams to take victory after victory.