A leading contemporary Italian artist has authored the car art project “Turin-Zuffenhausen”, implemented on the custom-built car by Moncenisio StudioTorino for Porsche and presented at the Turin Motor Show 2017. In this interview Ugo Nespolo tells us about his source of inspiration for a special car and its P Zero Pirelli colour edition tyres.Hence the artist guides us on a tour of his aesthetic world based on historical avant-garde trends and on futurism, whose epoch-making vision considered the car a legend.And this is true to date in terms of beauty and exclusive traits

Home life What remains of the car?

Who is Ugo Nespolo? When did your art encounter the world of industrial products and of cars, in particular?
Let’s start by saying that my idea of the figure of an artist and of his creative framework refers to the vision of historical avant-garde trends. Particularly for some of them, including futurism, the artist was not merely a person who only painted pictures but was, instead, one who stepped into and formed ties with the real world and real life that featured technological and industrial progress. “Beauty that surpasses the Winged Victory of Samothrace”, quoting Marinetti’s words about the car.Futurists were very interested on the theme of speed; hence the importance of the car. A century later, I do not consider speed the core concept anymore. A central role is, instead, played by the urge to poke one’s nose into things in an attempt to create the ideal connection we would like to establish between art and life. As I said before, the artist is not merely a person who paints a picture but one who actually wants to delve into things, participate in life, and be a witness of real life. Hence, the artist can only be contemporary. That’s obvious. I have always been keen on linking up with multiple aspects of real life in which the industry plays a crucial, important role. Marinetti, Depero, Balla, besides German avant-garde figures, if we consider Weimar’s Bauhaus, dreamt of experiencing the world of real life completely. That is, only the world of real life. Indeed, over the years I have partnered the industrial framework and many leading firms, such as FIAT, Renault and Toyota, to mention a few automobile manufacturers, besides BMW. I designed a Ducati racing bike, and a Vespa bike for Piaggio. I have also designed many items for industries that operate in other sectors. Hence, I am convinced that this is the only escape route artists have to avoid being considered pointless objects in the social context, people who produce attractive decorations for high society living rooms. I never liked this. Instead, I have always explored the various themes of reality. And, I repeat, this also includes the automobile industry. 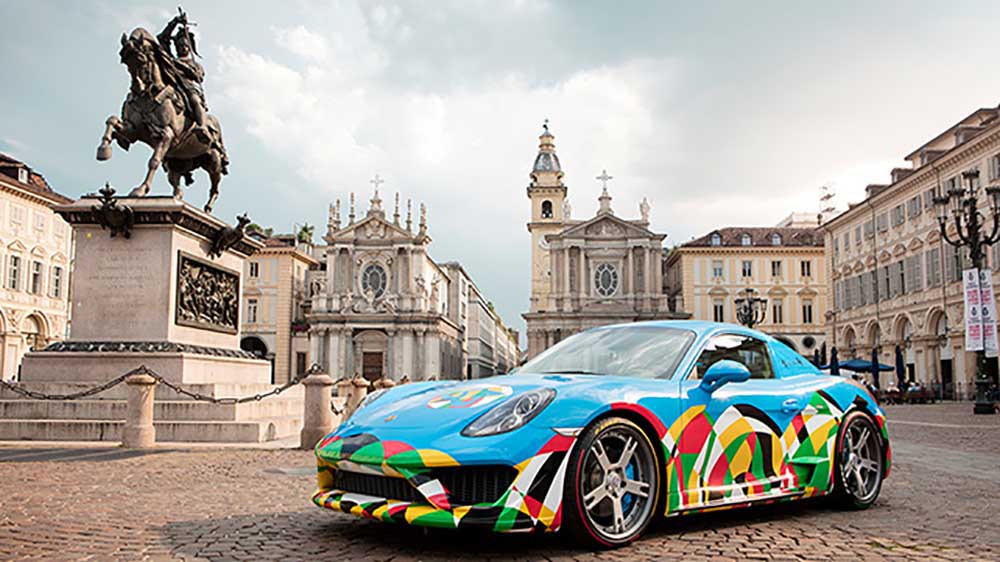 There was a time when the car disrupted collective imagination, and so did art.Today, what is a car in the eyes of an artist?
In the past, I mean in the early 1900s when it was invented, the car was a legend for artists. I mentioned Marinetti’s idea of the car in his futurist Manifesto, “Beauty that surpasses the Winged Victory of Samothrace”.  But French artists also come to mind, such as Sonia Delaunay, for instance, and her striking innovative paintwork on a car. The car is a modern device. It is related to human emancipation, to individual movement and, hence, to the possibility of actually being independent. Moreover, the beauty of a car has become a myth, the same legend of the beauty of objects, in this case of moving objects.
Already in the 1800s some British artists, such as the Pre-Raphaelites and other aesthetic groups, attempted to endow even industrial objects with unique features.There was a clash between handcrafted items and industrially produced ones. Finally, design intervened to merge beauty and functional features with results that were not always positive. What remains of the car? Well, very little remains of that car. I mean that the car we all use is a device we need to move around.But there is another car, like the one we have now designed for Porsche, a car that has a calling for exhibitions, a work of art, the outcome of research focused on imagination rather than on use. This is what remains of the car. There remains the dream of a particular car, of a one-off item, a refined item produced, as the British would say, for connoisseurship. What distinguishes it from the object we use to travel from home to office? Today, for those who can afford it, the car can still become a collection item, an exclusive object. Not so much to increase speed as to be unique.

Let’s talk about the “Turin-Zuffenhausen”. How was the car art project conceived and how was it implemented?
The process was very simple. Stola, a very good friend of mine, wanted to create a special car as a tribute to the bond established over 70 years ago between the car manufacturer Porsche and the city of Turin, the site of the first outdoor car show. Zuffenhausen is the name of the district in Stuttgart where the Porsche head office is situated.Hence the Turin-Zuffenhausen and the idea of making the 626 km journey at the end of the Car Show. The car proposed by Stola is a unique item called Moncenisio, enhanced by the colour of lake Moncenisio. Every detail of the car is produced by a leading expert, from the tank to the interior and the tyres. In short, it is the epitome of excellence.
My work mainly concerned the lower section of the body. I intentionally maintained the design of the top section intact to leave the original colour. I was inspired by the concept of Italy and Germany united by a passion for and expertise in cars. Hence, I took the six colours of the two flags and arranged them at random to give the impression of movement. It is a somewhat ideal tribute to futurism.
I also enjoyed working on Pirelli’s P Zero coloured tyres. I found them an absolute novelty, a pretty feature many have appreciated. As a matter of fact, I have at times wondered why white tyres were produced in America in the 1930s and 1940s but are not anymore. I guess it is for technical reasons. Anyhow, it would be exciting to produce coloured tyres. I’m sure many would love them. I’ve already an idea for the design.