35 meters high, diameter of 2 meters and a half with a wooden canopy 42 meters wide. These are the numbers of the Tree of Life: a history of engineering

In 6 months its shows were seen by 14 million people, two-thirds of all visitors to Expo. The video was clicked 800 thousand times on YouTube. The hashtag #treeoflife was more successful than #Christmastree. Just a few of the numbers that demonstrate the success of the Tree of Life. Like the Eiffel Tower, built for Expo 1889 in Paris, it is destined to remain the symbol of Expo Milano 2016 for years to come. Not everyone, however, had the privilege to see 'inside' the Tree of Life, to venture up the 11 floors of technology that support its large wooden canopy. And to understand that behind the canopy, the shows, and the tree’s ability to fascinate the world of Expo, there is a tale of engineering: discover it by clicking on the video…

The visit reveals a tale of engineering in its purest and truest sense, defined as "the discipline that studies the application of scientific knowledge to the needs of civil life and socio-economic development." It was with these ideas in mind that in 2013 a group of entrepreneurs from Brescia began to wonder, for the occasion of the Milan event, what would be on the one hand the right symbol to leave and on the other hand the best opportunity to be seized.

The world will be looking at Italy, so what better opportunity to show what we are capable of

reply both Paul Franceschetti and Giancarlo Turati, chairman and managing director respectively of the "Brescia Pride" consortium, when asked why they chose to launch themselves into this adventure. "Brescia Pride" is the banner under which nineteen businesses from Brescia decided to unite to create what aimed to be, and succeeded in becoming, a true symbol of the event. An adventure in which, not coincidentally, two other organizations with strong ties to the region took part: Coldiretti and Pirelli. And it is a tie which, in Pirelli's case, complements a commitment to innovation and technology and a desire to help leave a tangible legacy for the city. As happened, for example, when the company contributed to the completion of the Milan Metro in 1964, providing, among other things, the rubber "bubble" flooring that still graces it today. 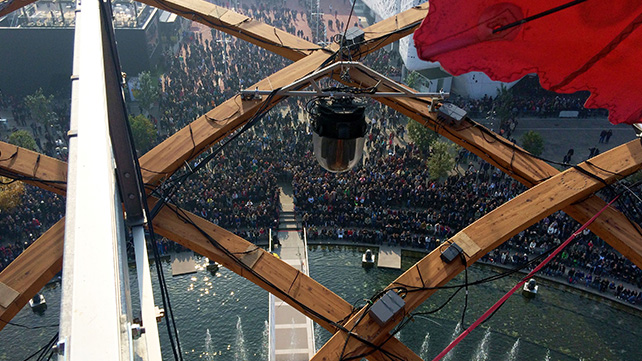 With the support of the other two sponsors, the consortium from Brescia worked on turning an idea of Marco Balich, artistic director of the Italian Pavilion, into a realizable concept.

The tree is a metaphor of Italy growing from its roots, feeding off them but growing upwards

said Balich in the book "Portrait of a dream", published to celebrate the Tree of Life. After all the relevant bureaucratic hurdles had been overcome and the project had received a final green light, the real race against time began, a race that showcased the quality of Italian know-how. The Consortium was formed on 12 December 2014, the site opened on 9 January 2015, the iconic wooden canopy was raised on 4 March 2015, and the tree was completed and officially handed over to Expo on 27 April 2015. In other words, just three months' work to complete a truly significant structure in terms of size and engineering. A quick look inside and outside the tree is enough to reveal its complexity: the structure is 35 meters high, the wooden canopy is about 42 metres wide and is mounted on a steel counter-tube, which is in turn attached to a central tube, also made of steel, with a 2.5 metre diameter. Inside the central tube runs a spiral staircase that rises to a height of 11 floors; the lighting effects that characterized the 1,260 shows provided by the Tree during Expo were made possible by 7 kilometres of LEDs and 25 kilometres of electrical cables, more or less the same quantity required to serve 5,000 normal users. As they climb the striking spiral staircase, Turati and Franceschetti recount the highlights of this adventure: the idea of using wood - Siberian Larch, which is particularly flexible and suitable for the sinuous structure - instead of just steel as originally planned; the idea of anchoring the canopy in a counter-tube and the resulting suspense felt on the day when it was finally hoisted aloft. Up there where, right up to the final days of Expo, one could look out and observe the huge crowd gathered below. An image that sums up the success of Expo and delivers its symbol to the city. Mission accomplished.

We Feed The Future:
tales from Expo 2015