Tom Dixon: design can be anything, even a tyre

The British designer presents “Multiplex: Yesterday, Today” at Fuorisalone 2017 and unveils his collaboration with Pirelli

Home life Tom Dixon: design can be anything, even a tyre

“My first time at the Salone del Mobile in Milan was many years ago, and it was all very different than it is today”, said Tom Dixon, world famous and award-winning British designer. “It used to mainly be an Italian furniture fair, whereas today I like to call it the Glastonbury of design, stealing the name of the famous music festival we have in the UK. This week the city is invaded by colleagues and students, there are parties everywhere, and we are seeking the excitement that will define the future of design. And finally it has been discovered that design can entertain large audiences”. Dixon starts by recalling the past, like in the subtitle of the project he has bought to Milan this year: “Multiplex: Yesterday. Today. Tomorrow”, now on show at the Manzoni Theatre, Cinema and Gallery. “I wanted to bring many of my pieces from “yesterday” to this Salone, revisited with a more contemporary approach. Since we are in a venue that is also a cinema, let’s just say it could be defined the ‘prequel’ to my work. The “today” is the Multiplex: we took an historical location in Milan, still unknown to many, and made it into one big concept space. As for the “tomorrow”, who knows, at the moment I am inspired by different worlds: there’s lighting design, then textiles, and many types of objects that are diverse and yet complementary to each other at the same time”. 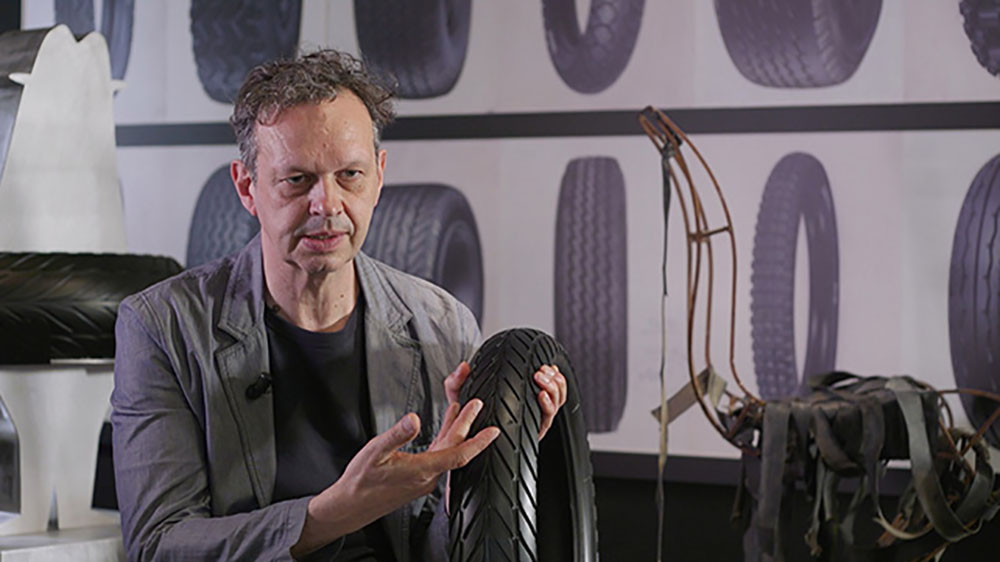 Multiplex unites all of Dixons work. There is the new open-platform Delaktig modular sofa that becomes a bed (and much more) designed for Ikea, but also furniture of every genre and type, down to accessorises and perfumes, “conceptual food” (as he calls it), since it seems impossible to define design today: “My universe is now populated by objects that didn’t have a place before, I can no longer work out what thing comes before another.” Among these new entries to the world of Tom Dixon, there are three tyres designed for Pirelli, a new experience for both the designer and the brand. In the Manzoni Gallery there is a space dedicated to these creative tyre prototypes that dialogue with the previous designs of the company, and even a chewable tyre, “black like motorcycle tyres and cooked “at the moment. The relationship between Dixon and Pirelli came about naturally: Dixon has always been a motorcycle enthusiast; Pirelli was looking for someone to better interpret the new market demand and create tyres able to add a touch of design and aesthetic to functionality and performance. This is necessary because today motorcycles are increasingly bare; tyres catch the eye and are accessories that bikers select carefully. Tom Dixon worked following this direction: the classic grain meets new shapes and patterns that resemble leaves or scales, without forgetting that tyres belong on the road and have to be functional. This is why the designer, struck by his visit to Pirelli Hangar Bicocca and the Pirelli Foundation last year (home to an archive dating back to the company’s establishment in 1872), started consulting Pirelli engineers so that his project would not just be a theoretical design by a creative professional. “I have always been interested in motorcycle design, as well as working with rubber. For me it has been an absolute pleasure to work with Pirelli, which has collaborated with a number of famous artists and designers. It was fascinating to work with such an historic and qualified company to come up with a series of tread designs, also considering the complex technical parameters involved in the production of motorcycle tyres”.

The three Pirelli tyres are displayed alongside other projects by Dixon on show at Design Week 2017 in a web of references. “The Salone del Mobile in Milan is the best networking opportunity for designers. This is where everything happens”. The world of design is increasingly interconnected, from major brands to schools. Like with the Ikea project, which involved a number of students from around the world. “We are obsessed with beds, it is the piece of furniture that accompanies us through life: we are born in cradle and laid in a coffin when we die,” Dixon joked. This obsession inspired Delaktig, created in the London studio of the designer and realized thanks to the contribution of young students selected from design schools across the globe, from Tokyo to New York. Which is one way of looking at the future: “But I don’t want to reveal too much of what I have planned. I will definitely be busy with a big project in Hong Kong, and then with a cruise line. And my partnership with Pirelli has opened up a field I would like to explore further”. Tom Dixon’s “Tomorrow” is still a blank to be filled in.

It's getting hotter: what happens if you take too long to change your tyres

Luxury on the road
and racing passion
#ThePerfectFit with Bentley