Conrad Quilty-Harper is the editor of GQ.co.uk and oversees all digital content produced by British GQ, from its leading political, fashion and cultural commentary through to its video content and award-winning social media presence

In its many guises, the Pirelli Calendar has always been one of the best forums for world-leading photographers to realise their unique creative visions, and this year it has outdone itself by selecting Tim Walker and allowing him to bring Alice’s Adventures in Wonderland to life in photographic form. 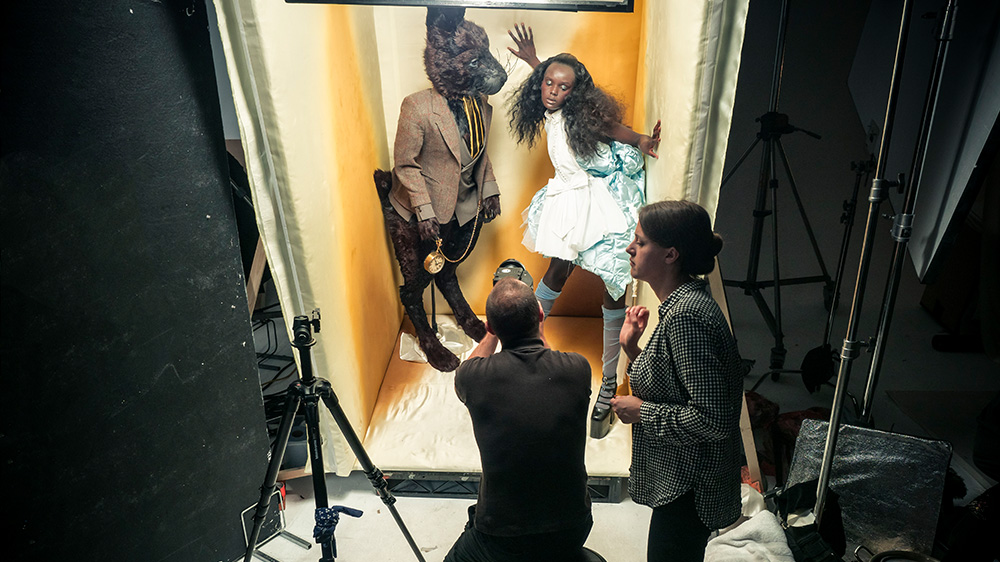 With the help of innovative set designer Shona Heath, incoming British Vogue editor and stylist Edward Enninful and an incredible cast of models and creative industry figures, it’s clear that Tim Walker’s yet-to-be unveiled 45th Pirelli Calendar will set the bar higher than ever for creative expression, just like last year and future years. Although the photos are still under wraps - and will remain so until the unveiling in New York on November 10th - there’s a lot we can infer about the new Calendar, with three key reasons why it will be a blockbuster:

From the start of his career, he’s been known for his whimsical, extravagant sets and keen eye for theatre, from the ghostly Spitfire crashing into the reading room of a grand mansion, to Jennifer Lawrence posing mysteriously with a white peacock. (In retrospect, one wonders whether someone painted the peacock that way, like the Queen’s gardeners painting red roses white.)

Everything Walker does is epically eccentric and tries to tell a story which makes the viewer ask “why?” Why is a giant crocodile sitting on Karen Elson’s lap? What is that melted tuba and abstract brass band all about in that photo with Coco Rocha? And how did Charlie’s floating glass lift crash so picturesquely in a field full of wildflowers in Vogue’s Roald Dahl-inspired shoot?

Just like Lewis Carroll, Tim Walker knows that there’s fun in confusion, and that explaining everything will simply ruin the illusion. His photographs, like Carroll’s stories, are not logical: they subvert our expectations and entertain, excite and intrigue. I also can’t help but draw a parallel to the fact that Carroll was an accomplished photographer himself, who captured thousands of beautiful images despite the laborious state of photographic technology in the mid-1800s. When his friend Alfred, Lord Tennyson, saw his portraits, he told him, “You, I suppose, dream photographs.” Coincidence or not, it almost feels like Walker is collaborating with the late author. Could there be a better creative partnership?

Second reason: there’s the all-star cast who collectively possess more talent, character and intelligence than I thought it was possible to assemble. At the press preview earlier this year, I heard Duckie Thot - who plays Alice - calmly articulate her innate positivity, ambition and drive to a room full of strangers, all while wearing giant heels and a dress seemingly starched at a 90 degree angle. Then there’s Thando Hopa, a South African model who has simultaneously managed to balance a career as a lawyer with appearances in some of the world’s most striking photo shoots.

Sean “Diddy” Combs and Naomi Campbell both bring that vital element, glamour, in spades as the Royal Beheaders (naturally they were present on the day with huge entourages, fit for a King or a Queen). Elsewhere, I can’t wait to see how fearless Lupita Nyong’o plays the dormouse, how model of the moment Adwoa Aboah portrays Tweedledee, nor how Whoopi Goldberg will interpret the Duchess, just to mention a few of the brilliant talent who are part of this creative project. With a cast like this, the Pirelli Calendar’s legacy is assured.

Thirdly, and perhaps most importantly, this Calendar feels incredibly suited to our turbulent times. Every day the news brings reminders that society’s Mad Hatters are spreading seeds of division and madness, that up is down, left is right and things are not quite as they seem.

It’s exciting that the Pirelli Calendar, a beacon of beauty and escapism, has shone its light so strongly towards an optimistic future with its decision to support Tim Walker’s idea and reflect, as Edward Enninful told the New York Times, a “new generation who refuse to compromise and want answers to the questions that matter to them.”

On more than one occasion in the last 12 months in my work as an editor at GQ, world events have made me feel like I’ve fallen down the rabbit hole. That unsettling feeling isn’t new, as Lewis Carroll’s book - and its echoes in contemporary culture, from John Lennon’s “I Am The Walrus”, to Guillermo del Toro’s Pan’s Labyrinth or any Dr Seuss book - attests. Any fresh reminder for people to laugh at life’s illogicalities and escape into a romantic fantasy world, full of beauty, is a welcome one in my book.

Conrad Quilty-Harper is the editor of GQ.co.uk and oversees all digital content produced by British GQ, from its leading political, fashion and cultural commentary through to its video content and award-winning social media presence.

Behind The Scenes with Tim Walker for the 45th Pirelli Calendar