There's no party like the Open Day: Pirelli Bicocca puts itself on show

An afternoon of fun for all ages: more than 2,800 people take part in the 2016 Open Day "Pirelli on show".A party for everybody, made even more special by the presence of three special guests from the worlds of football and motor racing.

Home life There's no party like the Open Day: Pirelli Bicocca puts itself on show

There's no party like the Open Day: Pirelli Bicocca puts itself on show

An afternoon of fun for all ages: more than 2,800 people take part in the 2016 Open Day "Pirelli on show".A party for everybody, made even more special by the presence of three special guests from the worlds of football and motor racing. 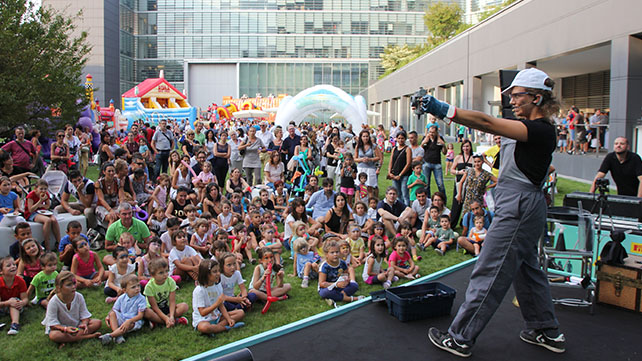 Every year, the headquarters of Pirelli hosts an afternoon of fun and celebration. It takes place in September, when the holidays are still a vivid memory in our minds, school is yet to start and the afternoon sun is still high, casting a warm glow on proceedings.

This year too - on Saturday 10 September, to be precise - the Bicocca opened its doors to welcome all employees, their families and their friends for an afternoon of fun, a moment of happiness spent in a place where usually they come only to work. And the magic of a Saturday afternoon can also transform the workplace and the faces of the people who fill it: a different light, a festive atmosphere and above all an army of partying children who can't wait to have some fun.

The theme of the recently completed Open Day was "Pirelli on show". A way of putting the world of Pirelli on display; its products, its history and the talent of the people that work there. Which is why in the course of the afternoon some of the workers put themselves to the test, coming up on stage for artistic exhibitions in front of all of their colleagues present. For fans of photography, in the months leading up to the event a collection was organised of the best photographs taken of the people who work at the Pirelli Bicocca. All of the participants had the opportunity to have their best photos exhibited during the Open Day.

There were also three guest of honour from the world of sport for the occasion: the former Inter stars Beppe Baresi and Riccardo Ferri, who told some fascinating anecdotes from their sporting lives, and the 2013 GP2 World Champion and current commentator for Sky Sports F1, Davide Valsecchi, who took part in a talk named "2017, the F1 tyre revolution": a discussion on the new tyre specifications which will be used in next year's Formula 1™ World Championship. To find out more read the article "2017: the year of the great leap... wider" published on www.pirelli.com.

Throughout the day no one could miss out on the traditional guided tours of the beating hearts of Pirelli: the Pirelli Foundation - historical archive of the company; the old cooling tower - which now contains an auditorium, four floors of meeting rooms and the boardroom; the Research and Development building - the site of Pirelli experimentation; the Bicocca Castle of the Arcimboldi - located within the gardens of the company, an old country dwelling of the Arcimboldi family built during the fifteenth century and now owned by Pirelli; the Pirelli Next MIRS factory; and the exhibition "The architectures of industry", one of the installations created for the Milan Triennale, hosted at the HQ1 building of the Pirelli Bicocca.

At the end of the day, there was also a space dedicated to healthy cooking: Dr Chiara Manzi - a real expert in nutritional science applied to cooking - held a cooking show: "From food to die for to food to live for", accompanied by the new world pastry champion Davide Comaschi.

The sun sets on the Bicocca: the party is over, and the friends depart.But the wonderful memory of three thousand smiles remains.

Young people
and their inventions