BS3, Sempione and Cinturato write the history of mass motorisation in the sixties

Home life The tyre that accompanies you
up and down Italy

Nowadays, it’s commonplace. On most Italian roads, after 15 November it is essentially mandatory to use chains or snow tyres. This wasn’t the case back in January 1961, but one conscientious driver of an Opel Rekord bearing Florence plates seemed very happy with his BS3 winter tyres, as he stood there in his coat and scarf enjoying a cappuccino at a roadside café while the Pirelli mechanics fitted the tyres onto his car. 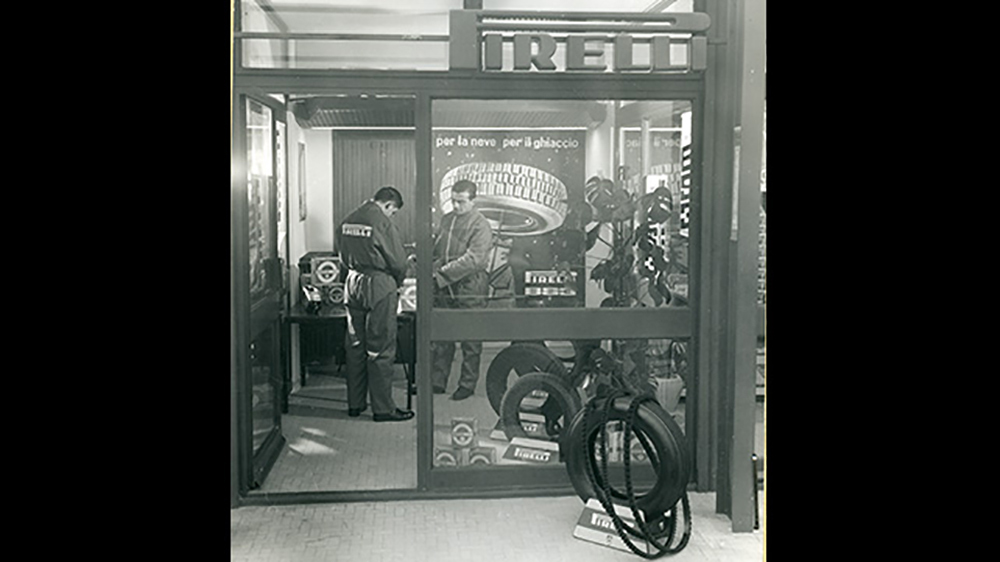 The snapshot of this scene comes from the Pirelli Historical Archives and is now part of a collection of photos from along the Autostrada del Sole motorway near Lodi that embodies the spirit of an era— of an Italy on the move. At Agip’s motorway service stations, Pirelli had opened its tyre shops that—like a sort of prêt-à-porter for cars—would change your tyres in the time it took for a quick break at the Autogrill Alemagna rest stop. The Lodi location would be the first—for travellers out of Milan—of eight such Pirelli garages to be found along the Autostrada del Sole as it wound south towards Naples, for a highly organised network of tyre assistance and consulting that helped set the stage for an Italy in which growth in the use of cars was “booming at the same rate as TV, which was nowhere just yesterday and then suddenly was a must for both the rich and the poor, and now everywhere you look there are televisions”. This was how Dario Paccino described the “remarkable expansion of cars in Italy” in the September-October 1960 issue of Pirelli. Rivista d’Informazione e di Tecnica, the magazine the tyre manufacturer published throughout the 50s and 60s as the company’s contribution to the lively cultural debate of those times.

In 1959 and 1960, car manufacturing shot up 30% and more to surpass 500,000 new car sales each year. There were over two million cars on Italian roads, and the forecasts for growth for the years to come were as bright as good be. Tyre mechanics, in turn, were a necessary feature of this rapid growth in mass motorisation. With the company’s plans to open tyre shops all along the country’s “backbone”, Pirelli gave great credibility to its dealers as a crucial link in the value chain, and the product range being offered had been structured accordingly. The era of Cinturato, Sempione and Rolle had begun, and the photos taken at the Lodi Autogrill in 1961 tell the tale of how the “winter” tyre became a success on Italian roads.

Pirelli had been making tyres with a deeply grooved tread pattern for decades, but it was the boom in car sales of the 50s and 60s that drove the company towards a more modern, more reliable product. It was Pirelli’s promise for safe, secure driving as well as a source of further technological opportunity. In fact, that distinguished gentleman, with his coat and scarf and Opel Rekord with Florence plates, had heeded the advice of his mechanic and bought the unique winter tyres with interchangeable tread bands: the Pirelli BS3, invented just a couple of years earlier and the embodiment of Italian creativity in technology, the worthy subject of a promotional film by Ermanno Scopinich.

Back in 1961, Italy was on the move. Up and down the motorway, they were travelling on four wheels in their Fiat Millecentos, Seicento D’s, Bianchinas, or Lancia Appias, making that owner of the Opel Rekord something of a foreign-car-loving snob. They raced back and forth, safe in the knowledge that, in just a few miles, they would have found a modern, welcoming Autogrill and Pirelli tyre shop. In much the same way, the minds of marketing creatives were also racing, producing work like the little man protecting himself from the snow with a Pirelli BS3, created by Riccardo Manzi, or the series of ads entitled “La nostra vita sulle strade” (Our life on the road) from a few years later, which Pirelli dedicated to the Cinturato—both examples of riding in the fast lane of the imagination.