On blurring the lines between design and fine arts. An interview with Paula Scher about her project “Maps” 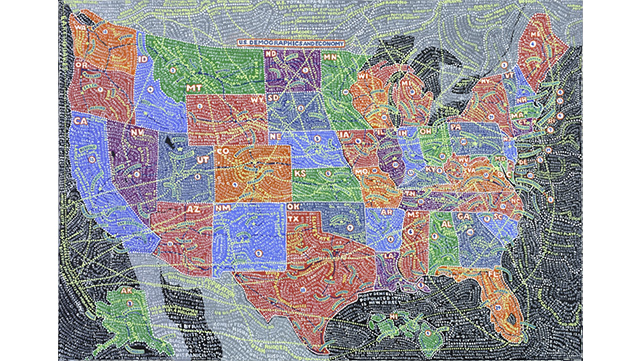 “I’m just a designer,” Paula Scher replied as I said how honoured we were to speak with her. What she said is not exactly the truth, as Scher is also an artist, a design educator, a talented public speaker, a director at Pentagram – the prestigious studio that redesigned the identity system for the Museum of Modern Art in New York –, and much more. Throughout her legendary career, she has always tried to figure out how to change and evaluate the communicative power of images and texts, breathing new life into every object, brand, place and space that has fallen into the path of her gaze.

Her job as a “transformer of spaces” began with a shift in her own space: after college, she moved from Washington DC to New York, a city that has, according to her, a dense structure and cultural mix that has influenced the way she looks at typography. At 25, she was the East Coast art director at CBS Records, where she curated the design of hundreds of albums, making each cover a little masterpiece of creatively combined styles from the past. Scher was a ‘post-modernist,’ but she wasn’t aware of it. She just hated using minimal, boring types like Helvetica, and so she began experimenting with early modernist typography and learned how to work in every style. “I just was very lucky,” she says, “because I had a lot of freedom to explore new territories. Today it’s different. Graphic design is such a crowded profession now”.

Her practice, as both an artist and a designer, has always focused on words. In both her environmental projects and her maps, she plays with the relationship between language and form, the signifier and the signified, graphics and colour. She transforms letters into a dynamic stream that entirely changes the energy of the space she works in.

Her love story with words, she explains, began in college. “I didn’t draw very well, and I also had difficulty working with types. A teacher suggested I illustrate with types, so I began to look at types as form and I understood how they make meaning”. She started combining typography with images to do just that. “All the typography took over, and images ran away,” she said, laughing with relief.

In her large-scale iconic painted maps (a new set was recently shown in the exhibition titled “U.S.A.” inaugurated at the Bryce Wolkowitz Gallery in New York City), Scher combines her devotion to words with her passion for exploring spaces. These enormous paintings explore the power of words to provoke curiosity, anxiety, or a sense of belonging in order to generate images, memories and desires. On the other hand, the maps emphasise the complex, dynamic and chaotic nature of territories, reflecting the profusion of data that overwhelms us all on a daily basis. In some way, these maps could remind us of Alighiero Boetti’s embroidered maps, made by Afghani artisans who followed the artist’s instructions. Like Scher’s maps, Alighiero Boetti’s maps also include mistakes and oddities. In one of them, for example, the sea is pink rather than blue, because the Afghani weavers did not have a tradition of mapping.

“Serious work is not perfect,” Scher says, recalling the concept of seriousness she explained during her TED talk, which focused on seriousness against solemnity and invention against perfection. “If you are serious, and not interested in becoming solemn, you’re going to experiment and explore and try to push something. You’re going to make discoveries, and when you make discoveries, there are always mistakes.”

A map is always an approximation and artists try to emphasize this arbitrary nature, using them to tell a story about their perception of time and space, persuading us to change ours. Scher's maps are both an attempt to take control over the complexity of territories, and a way of addressing and exploring this complexity in greater depth. Her preparatory process literally digs deep as she works on many different maps’ sources at once. In fact, a single map can take her six months to finish: “I combine information to create a different way of looking at things, so you might look at distance against population or geography against demography.”

These paintings are not about information, they are impressionistic rather than literal. But subject matters, even if its representation is not perfect: “The subject is something I’m very interested in,” Paula says, “it’s something that I find in the current consciousness or something that I have a strong feelings about. I painted the Tsunami, China, Africa and I painted the United States and New York City many times because I know them so well. During the election year, for example, you hear what people are thinking, what their opinions are, and I become obsessed with the geography and demography of United States, to see what I can learn, just by exploring more deeply.”

“We should not cease from exploration,” wrote T.S. Eliot another great explorer of mental lands “and the end of all our exploring will be to arrive where we started and know the place for the first time.”