Sometimes, in life, there are “sliding doors” moments that define your fortune. In the case of ballet superstar Misty Copeland, there was a succession of moments where it almost didn’t happen… where circumstance and consequence very nearly took her away from dreams that have now been realised many times over.

First there was the input of Elizabeth Cantine, Copeland’s school drill-team coach, who saw something special in her and encouraged her to attend a free ballet class at the local youth organisation, the Boys & Girls Club, in her native Los Angeles. The class was run by Cantine’s friend, Cynthia Bradley.

Then again there was the moment two years later when Copeland’s mother told her daughter that she would have to give up ballet because the commute was too tough, only for Bradley to step in and invite the youngster to live with her family during the week, thus maintaining her artistic education and protecting a future career that is truly the stuff of dreams.

That Copeland had fortune on her side in the context of the adage “right time, right place” doesn’t do service to what surrounded those vital moments – namely, years of painstaking dedication, devastating commitment and sheer bloody-mindedness.

As a youngster, Copeland overcame a difficult family set-up; she didn’t see her father between the ages of two and 22, and her mother moved around, eventually marrying four times. Her childhood was one where love didn’t necessarily come before the hard realities of making ends meet and where lawyers even became involved as a custody battle raged.

Yet it is a reflection of all these experiences that Copeland has excelled in her craft, despite having not specialised in ballet until her teenage years.

Copeland, now 36, has battled racial prejudice, injury, the temptations of adolescence and the incredible pressures layered on her as both a performer and a person.

She has emerged resilient, calm, enthused and philosophical, channelling all the mental and physical stress into dance routines that are purposeful, graceful and meaningful.

She is now a stage performer, public speaker and good causes philanthropist. She has released two autobiographies, been named one of Time magazine’s top 100 most influential people in the world and is a go-to name for a variety of brands who need an ambassador who represents trust, determination and sincerity.

She is… Misty Copeland. 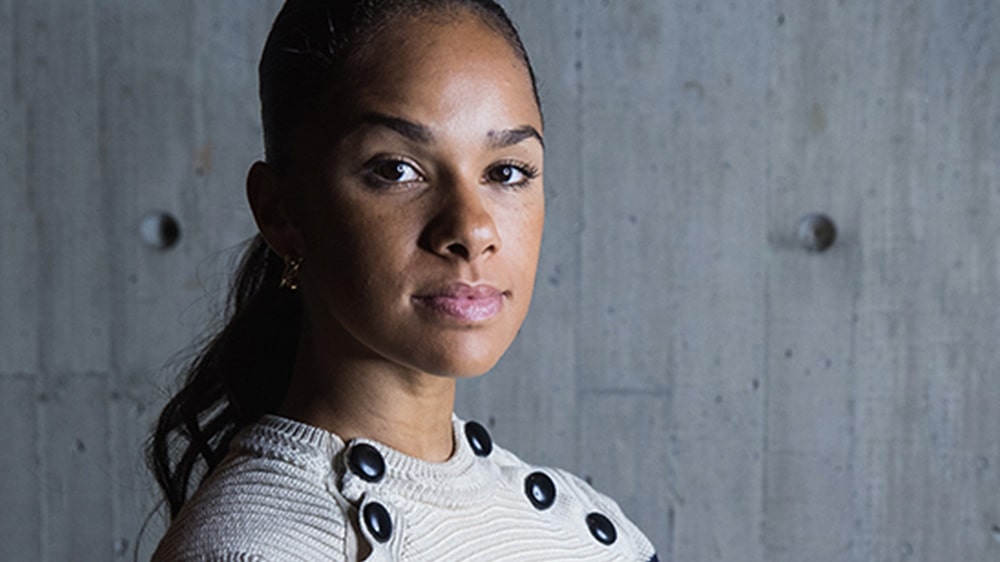 There is a well-known picture of you from 1995 which it transpires was one of the first times that you had been ‘en pointe'. Looking back, are you glad that it was all documented?

Oh yes, absolutely. I am so grateful because I have always been – and still am to this day – caught up in the present moment and I am not always aware of what is going on and the magnitude of it.

I know the photo. Cynthia Bradley gave me these weird shoes – I put them on and stood up and was like, “Cool”. Then she said to me: “How are you standing on your toes? You have no training”. Then, before long I was doing all these crazy ballet stances...

I had never worn pointe shoes before and I think that a lot of that was documented through photographs and videos. To be able to do that was this innate thing I had inside of me.

Still to this day, Cynthia Bradley says, “I don’t know how you knew how to do these things,” because I had never seen ballet and I had never heard classical music. But there was something within me and I would hear the music from Don Quixote and I knew to lift my chin in certain ways and at certain times.

Did you feel at the time that you had met this challenge and succeeded? Or did you not know the enormity of it?

I just felt like it was a task and that I wanted to accomplish it.

I have always been a perfectionist and I always wanted to fit in. I think all of those things that held me back in life as a child were being exorcised through ballet – I was one of six children in a single-parent home; I literally had no voice, no identity and I didn’t even want to stand out in any way.

All of those insecurities for me became strengths when I entered the ballet world. It is fascinating to think about things that way, but in reality I didn’t really consider anything in that moment, in the sense that I wasn’t aware how pivotal it was at the time. I was just doing what I was being asked... and here I am!

Was there ever a thought that dance could be your thing?

There was not a thought; it was said that it could be but it didn’t really come about until I had to decide how seriously I wanted to take it forward.

I remember conversations eventually intensifying and there was a timeframe within a couple of months of that picture being taken, maybe, where my teachers knew something needed to happen. I was 13 and that was an age which was rare, because I was a late starter.

If I was going to succeed, then I needed to do the training to become an elite professional and I didn’t have any idea of what that meant. I had never even seen a live performance before. But they were telling me that if this was what I wanted to do, it would entail certain things, and I loved the fact that ballet was far bigger than me… I loved how that made me feel.

I said “yes” to something when I didn’t even know what it was I was agreeing to; I just loved the idea of it.

What is your dream role?

I have already performed it, as Juliet [in Romeo & Juliet]. But there may be something in the future that I haven’t done. I guess the thing I have wanted to do since I discovered ballet is play Kitri in Don Quixote.

What’s the best piece of advice you’ve ever been given?

To not let other people's words define you. I think that’s really important in a lot of things in life, but understanding that concept was especially important for me as a performer, because you are used to being criticised a lot.

What are three simple things that make you happy?

Who was your biggest role model?

That would be Raven Wilkinson. She is a former ballerina and she was the first African-American ballerina to be accepted into the Ballet Russe de Monte Carlo.

What is one moment that you will remember forever?

The day in 2015 when I was promoted to principal dancer at the American Ballet Theater.

What is your biggest fear?

One of my biggest fears – even through growing up, as well – is letting someone down. I think that’s what makes me such a hard worker. It is something that has helped me to succeed in my career and in my craft.

Where fear is concerned, and speaking as a teacher, I realise you need to let people have the belief to confront those demons. I don’t think there is any real way of preparing for something which seems scary – you just have to dive into it, knowing and expecting that you are going to come out of it standing on both feet.

Daniel Ricciardo – it’s all about the power and control