From foam rubber and footballs to the 'Cinturato'...

Home life The Pirelli patents:
a tale of invention and creativity

"Adess ghe capissarem on quaicoss, andemm a guardagh denter" (now we will figure it out and have I look inside) Luigi Emanueli, the Pirelli engineer who created the Cinturato Pirelli in 1951, was known to say in Milanese dialect. The new tyre, destined to become a celebrity in its field, was made by placing rubberised tyres radially with respect to the centre. This arrangement formed a belt – hence its name ('cinturato' means 'belted' in Italian) – for holding the plies lengthwise and maximising grip on corners. In the second half of the 1950s, the Cinturato tyre was leading mass motorisation allowing millions of Italians to travel safely, as the historical advertisement made by Pino Tovaglia and Arrigo Castellani declared. More than just a functional object, the Cinturato crossed the 1960s spawning a range of versions for specific applications and markets. The name is still used today for the most modern generations of Pirelli tyres for cars. Emanueli again had patented an oil-filled cable back in 1924. This complex system for transmitting energy at very high voltage revolutionised the power cable concept of its day and led to its inventor to be known as the founder of modern electrical engineering. 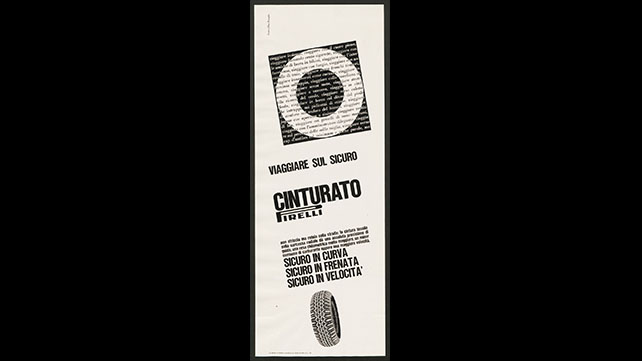 The entire history of Pirelli, from the end of the nineteenth century to the current day, has been marked by a long sequence of great and small discoveries, all duly patented, which revolutionised everyday life and the lifestyles of not only the Italians. Many familiar everyday objects are actually the result of the brilliant ideas and the ingenuity of dedicated designers, engineers and technical teams.
A special canvas for bicycle tyres was patented a few decades after the company was founded (precisely on 19th August 1896) and was followed in 1901 by the first Pirelli tyre for cars, called “Ercole”. The innovation was the new rim anchoring system which made it able to withstand faster speeds. Pirelli had been present on the fashion market since 1877 with waterproof garments, overcoats, cloaks, military ponchos, footwear. A new raincoat was patented in 1919. Pirelli would keep up its reputation in the 1960s with the introduction of new fabrics. Engineering was applied to materials and become associated with elegance, style and quality. Some examples: Lastex (an Italian-United States patent for yarn for making footwear, hats, bags, belts, and bathing costumes), elastomerised wool, duplex-coat (two layers of cotton filled with air), sporting (wool tweed with a velvety rubber coating), and wool rub (obtained by blending two different types of wool).
Giuseppe Venosta, another famous Pirelli engineer, filed a patent for a rubber football in 1922. Cheered on by soccer enthusiasts nationwide, sales of the first football shell made of rubberised fabric to replace the traditional leather balls kicked off in 1924: 'inalterable with any weather and terrain' and having 'perfect and undeformable' sphericity, the ball was four times more durable than its leather shell counterpart. A patent for foam rubber for making chairs and mattresses was filed in 1934. The invention soon displayed all its innovation potential and in the 1950s become the material of choice for design objects and furniture. It was used for armchairs and sofas, such as those designed by Albini, Ponti and Cassina, and for toys, like Meo Romeo the Cat (patented in 1950) that charmed Pablo Picasso among others, and Zizì the Monkey (patented in 1952), that won the prestigious Compasso d'Oro design award in 1954. Both toys were the product of Bruno Munari's imagination. Italy joined the science fiction craze in the 1950s and Pirelli was keeping abreast of the times with objects like a 'toy depicting an imaginary space being' in 1954.
With the development of mass tourism from the end of the 1940s into the 1970s, Pirelli started mass producing leisure gear, like inflatable mattresses, wetsuits, diving masks, flippers and rubber dinghies. Some of these items (namely a mask and a one-man canoe) were displayed at the MoMA in New York in 1962 as examples of Italian industrial excellence.
Nerino Bedini patented a 'submarine mask for atmospheric and autonomous breathing' in 1947. It was good-looking, comfortable and functional and it appeared in Ian Fleming's 'Octopussy' of the 007 series. "'You know what?', said Major Dexter Smythe to the octopus. 'You're going to have a real treat today if I can manage it.' He had spoken aloud, and his breath had steamed up the glass of his Pirelli mask.  He put his feet down to the sand beside the coral boulder and stood up.  The water reached to his armpits.  He took off the mask and spat into it, rubbed the spit round the glass, rinsed it clean, and pulled the rubber band of the mask back over his head. He bent down again." Another famous patent was filed in 1960 for the embossed rubber flooring used for the stations of Line 1 of the Milan underground which would soon be employed worldwide.
The Italian patent collection stored in the Italian Central Archives is full of Pirelli patents, like the rubber sole for mountaineering boots created by Pirelli in the 1930s with the collaboration of mountaineer Vitale Bramani and the personal protection garments of 1940, raincoats and the “rubber door mat” of 1964, the hot water bottle covered with textile fabric designed by Leo Cattoli in 1952 and the many tyre thread patents.