Pirelli Annual Report: why should a company’s activities only be told through numbers?

Home life Not only numbers: art tells the story of a company

The activities of a company are developed through people and the passion they put into making their products, through interaction with the community, via complex projects which bring together many variables. For this reason, since 2010, Pirelli, harking back to the many past examples of the company telling its own story in an original way, wanted to associate the work of numbers, with a broader version of its own reality, inventing a different project each year

Much more than a tyre company

Telling the story of the world of tyres through other languages, which involve art, graphics, cinema and writing, has been an integral part of Pirelli’s DNA since its foundation. From its avant-garde communication campaigns to its innovative posters inspired by Art Déco and Italian Futurism, up to the iconic Calendar, Pirelli has always aimed to present itself as more than a simple tyre company, and to do this it tapped the world’s best artists.

Reliability, speed, technology, flexibility: all these concepts have been interpreted by many creative people of international renown for over a century.

The soul and the story of the tyre

Also with the annual report, Pirelli has sought to keep this tradition alive, revealing the “soul” of the tyre and telling the story of its own activities though a project that goes beyond mere financial statements. It has done this with an innovative approach, both by entrusting the task to the views of the young and, from year to year, by involving some artists of international fame.

The 2010 annual report was enriched with images produced by the photography students of Milan’s Naba institute. In 2011 with the illustrations of the graphic designer Stefan Glerum and texts of the philosopher  Hans Magnus Enzensberger and the writers Guillermo Martinez, William Least Heat-Moon and Javier Cercas. In 2012, an edition which was awarded the “Certificate of Typographic Excellence” by the New York Type Directors Club, with the comic strips of Liza Donnelly, the New Yorker cartoonist. In the 2013 annual report, ten young talents from around the world, coordinated by the author and script writer Hanif Kureishi, worked on the concept of the wheel, “reinventing it” each through their own discipline: from physics to song, from architecture to cooking. 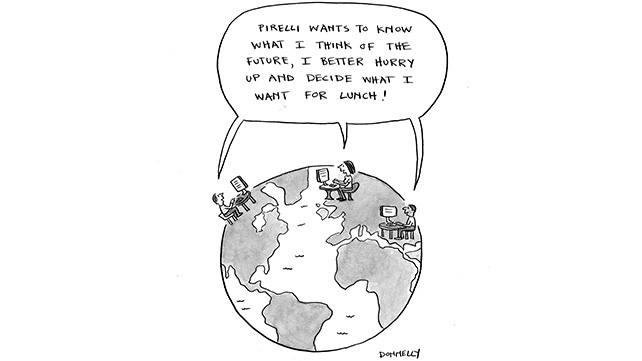 On the road
In conclusion, it was Street Art, with its boundless creativity and unique forms, which enriched the communication of the 2014 annual report.

The Brazilian Marina Zumi, the German Dome and the Russian Alexey Luka, three of the most interesting names on the new Urban Art scene, gave their interpretation of the tyre through 3 works assembled into a single installation: the trunk of a pyramid, about five metres high, with three facades of over 20 spare metres each, which was presented to the media and public at HangarBicocca, Pirelli’s contemporary art space.

This particular form of expression was used because the road, mobility and multiculturalism, typical elements of Street Art, also belong to Pirelli’s culture. It is precisely on the road, and with people’s need for mobility, that tyres live.

Thanks to these characteristics, this storytelling project has found space in the media at the international level, year after year, reaching a public that is not solely financial.

2014 Annual Report >
Reach your professional goal at Pirelli
​Your career, training and development..
Work with us >
Let's meet channel
​The list of Pirelli meetings with university students and young graduates organized at major universities...
Newly graduates >