Lost paradises and dreamlike beaches, modern metropolises and ancient ruins. Geography is one of the keys to understanding the evolution of The Cal™'s message

Home life The nomadic spirit
of the Pirelli Calendar

The Pirelli Calendar is quite the traveller. Throughout its history it has travelled far and wide, finding itself in iconic, spectacular places throughout the world. As you leaf through the 43separate editions of The Cal™, you have the chance to travel and rediscover passages in time and spot varying geographical trends.
The 1960s saw Pirelli featuring the jetties of Majorca and the beach umbrellas of the French Riviera, as well as galloping along the beaches of Morocco and astride a camel among the spectacular views of Tunisia. A time when the locations for shooting the calendar fell within the confines of the Mediterranean, home of the international jet set. 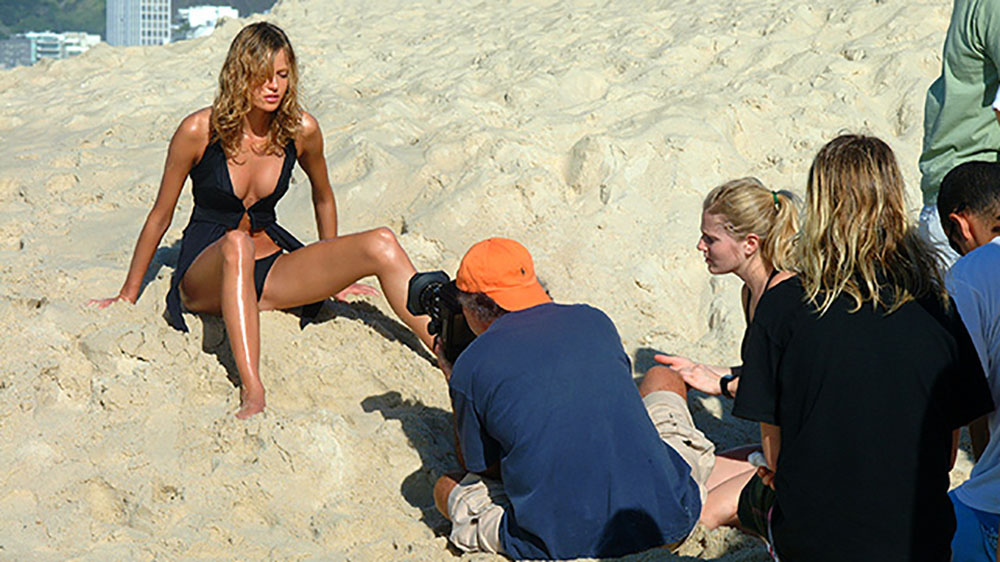 By 1969 the Pirelli Calendar was California dreaming, with floral bikinis and the cliffs of Big Sur. The following year it made its first trip to the Bahamas. The Caribbean would become one of its favourite locations.

The 1970 edition was a turning point: for the first time the clothes are transparent: you see but you don't see, and it is clear that, on the water's edge of these golden beaches, nudity is now permitted.
A year later, in Jamaica, came the first nude, in silhouette.  In 1974 the tropical hues belonged to the Seychelles. Then, in the first edition after the 1975-1983 break, once again in the Bahamas, there was an explosion of more obvious eroticism. It was also clear that its message also featured a novel idea for marketing and communication: the tyre marks of Cinturato Pirelli were superimposed on the naked bodies of the models. But not all the locations used have been so exotic.

In Norman Parkinson's 1985 shoot took place in Edinburgh, for instance, the camera gazing onto thousands of neoclassical lights of the new grand hotels. Yet travel remained relevant. It's no coincidence that Terence Donovan, the photographer for the 1986 edition - shot in Bath, England - produced an edition of The Cal™ dedicated to the beauty of African women, featuring jewellery marked with tyre tracks. The lights and colours have the air of the savannah before a storm, yet the actual distance remains unbridgeable.

The 1990s was boom time for Spain. Pirelli shot in Seville in 1990, with a surreal evocation of the Olympics (preceding the real ones in Barcelona in 1992), while in 1992 itself Almeria featured in a celebration of oriental mythology from Clive Arrowsmith. Then for five years from 1995, the United States became The Cal™'s centre of production, anticipating the biggest trends in fashion. Peter Lindbergh, Richard Avedon, Bruce Weber, Herb Rits and Annie Leibovitz were tasked with telling stories of a cosmopolitan femininity, not tied down to any one location.

2001 and 2003 both saw The Cal™ travel to Italy, with Mario Testino in Napoli and Bruce Wever in Cilento and Paestum, reconnecting to the "Bel Paese" and a shared feeling of "Made in Italy", the communication goal of the Pirelli Calendar, without losing any of the glamour and sophistication of the photography. But the most beautiful journeys of Pirelli have come since 2005, when Patrick Demarchelier began uncovering Brazil, with the country being revisited by Terry Richardson in 2010 and Steve McCurry in 2013. Photographic reporting has become became a central theme of the calendar. Pirelli has transformed itself into an explorer of places, traditions and tastes across continents. Like in 2008, for instance, in Shanghai, once again under the lens of Demarchelier. Or in 2009, when Peter Beard portrayed the delta of the river Okavango in Botswana, using the wildness of nature in his photos. And Mario Sorrenti in 2012, with the harsh landscape of Corsica. The lights of these calendars reflect on the geographical location, its nomadic attitude and the fact that exotic travel has become the true object of desire. In the last three years, The Cal™ focused more on the message itself, the photoshoots returning to the studio. This year, however, Peter Lindbergh has gone back to roaming the world, from New York to Berlin, London, Paris and Los Angeles, providing glimpses of these great cities, a feature of the international direction that remains a fundamental part of The Cal™'s DNA.

Fifty years
in one photo