From Pirelli HangarBicocca to Lungotevere, from the courtyard of the Palazzo dell'Enciclopedia Italiana to the narrow alleyways in Naples, Italy is developing a passion for street art 2.0

As a form of cultural expression, Street Art is now at the very heart of public debate. Discussions are about an epochal change in this figurative art form. Over recent years, street art has gradually disengaged from a counter-culture movement, which was deeply rooted in the suburban context, often on the borderline of lawfulness, to undertake a more institutional path, without losing the strength of its message, yet simply coming into positive contact with official commissioners and in keeping with the entities that manage the natural spaces of its manifestation. 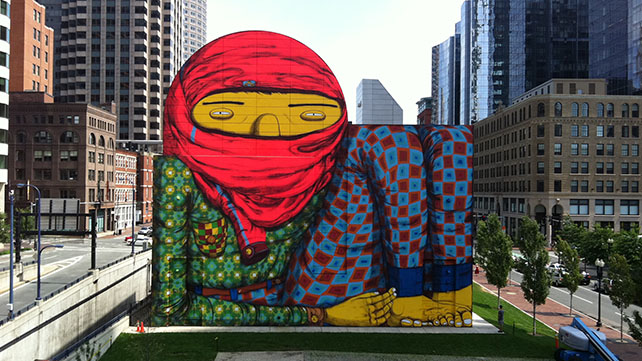 Purists of this genre are in disagreement, often talking of a betrayal of the cause and opportunistic detachment, but it is a fact that this type of transformation has emphasised the message of a public art, to be greeted and protected, by coming into contact with city administrations or with museum organisations. Some exemplary cases of this development have recently been the focus of attention in Italy. The display case built in Naples to guard the only Italian work by Bansky, perhaps the most famous street artist in the world, is cause for discussion. Guarding a work of art is not necessarily within the canons of what this type of work - devised to live and grow out in the open air and exposed to deterioration - represents. But evidently now the problem has arisen. The work of William Kentridge has developed in Rome along the walls lining the Tevere, between Ponte Sisto and Ponte Mazzini. His work entails a 550-metre long mural which will be inaugurated officially at Christmas. Aside from the work itself,  the most interesting feature is that Kentridge interacted directly with the municipal administration. The latter, unable to grant him the public space like a canvas on which to paint, in addition to the existing conditions, is completing a wok entitled  “Triumphs and Laments”, achieved  "by removal". To clarify, this means that the 80 figures, which are up to 10 metres high, are drawn using a water cleaning technique that traces them in contrast: in other words it is a smog-deleting work. As if the images emerged from the urban fabric corroded by pollution without covering anything up. Another very interesting work is by Eron, a famous Italian street artist, completed at the Palazzo dell'Enciclopedia Italiana Treccani, again in Rome. An emblematic decision by the institute which introduced the Rimini-born Eron among the artists in its volumes, as a pioneer of the artistic genre. In this case, the work is called “Soul of the Sea” and it demonstrates how even the most classical cultural realities are including this art form, acknowledging it and adding value to it. The collection with an almost encyclopaedic nature in Palazzo Pepoli in Bologna is controversial yet considerably rich, the result of various loans from private individuals, pooling together 250 street artists and moving them to the inside of a museum. This initiative is promoted by Fabio Roversi Monaco, chairman of Genus Bononiae which demonstrates how graffiti and urban styling are the object of desire of the public even when they have been extrapolated from their place of conception.
A work that involves the artists, who are called upon to tackle a post-industrial context is particularly what an international exhibition entity such as Pirelli HangarBicocca, directed by Vincente Todolì, is conducting. Indeed, in recent days Efêmero, the first large mural completed in Italy by Os Gemeos - excellent Brazilian artists - was presented. The work of Pirelli HangarBicocca rouses great interest because it is something of a compromise. In other words, it gives artists the opportunity to express themselves in an urban context with spaces and venues that are entirely in keeping with their message, yet which at the same time allows them to be in close proximity to a cultural organisation that boasts a calendar of innovative visual arts. As a matter of fact, the thousand square-metre mural on the external walls of Pirelli HangarBicocca recalls a train carriage (the former industrial function of the venue was in fact a train factory), and will be part of the new three-year project entitled “Outside the Cube”, dedicated to art forms tied to the urban and public context. The project will also entail a rich calendar of collateral investigative activities.
Cedar Lewisohn is the curator of the mural by Os Gemeos. Lewisohn is the author of various publications and was curator of the “Street Art at the Tate Modern” exhibition in 2008. The work will take up the two external walls of the Pirelli HangarBicocca "Cube" for one year, linking up to the building's architecture. It will demonstrate how a new platform now exists, that of contemporary structures which not only redevelop or gentrify but also give rise to street art projects.

The art of letting go