The library in the factory

Home life The library in the factory

The library in the factory

Experience from Settimo Torinese and the ideas of the publishers 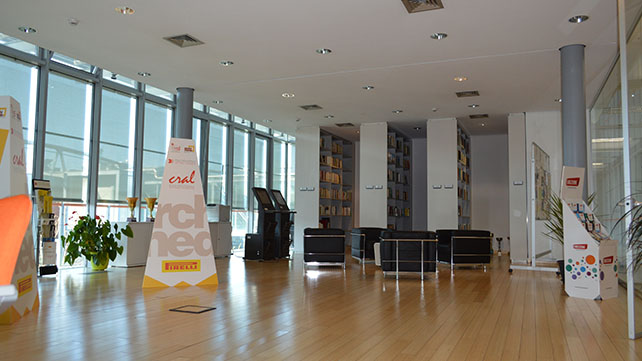 Books. In a factory. Culture and work. But also the culture of work. And this shared reality of passions and competences that they form, in an industrial company, and more specifically in a factory, which is much more than a place where production activities, technologies and various types of capital all combine (starting with human capital and social capital). A kind of community. And in certain aspects, even embodying conflicts. But a place full of life, in which converge knowledge, rights and duties, inclusion, citizenship. Questions dealt with by books. And questions that good books enable us to understand better.

So, it’s great news that on Tuesday 22, the company library will be inaugurated at the Pirelli Industrial Complex in Settimo Torinese, in collaboration with the Municipality, within the framework of the project “Archimede fuori di sé” and with the company group in the plant.

There was already a company library in a large community room in the “Spine”, the edifice containing services and laboratories designed by Renzo Piano, as the link between the two production plants: a thousand volumes, run by volunteers among the employees, well-attended, a service for the promotion of reading and the sharing of good books.

Now the initiative is expanding. And the Pirelli employees can take advantage of 110 thousand volumes, 220 magazines, 14 daily papers, 4500 films and documentaries on DVD, 4 thousand music CDs and 400 audio books, in short, the rich heritage of the Archimedes Municipal Library, which is supplemented by the even more extensive heritage from Sbam, the library system for the Turin metropolitan area (11 million books that can be searched for and booked using the ErasmoNet catalogue).

In fact – quite a lot to read. And hassle-free. The desk at the company library allows members registered with Cral Pirelli (i.e. the company group) to take out and return books, CDs and DVDs at the most convenient library, including the factory library. As Elena Piastra, Deputy Mayor of Settimo Torinese points out: "The Archimedes Beyond project has thus become enriched through an important new support structure. After the smaller libraries that were opened in past years at the Civic Hospital and the first private library included within Sbam. And we are very grateful to Pirelli for making possible this absolutely novel and highly innovative solution ".

In a word, Settimo working with Pirelli and L’Oreal as the trail blazers for a far wider distribution of books. This means factories that are viewed as communities in which reading itself becomes a channel for communication, encounters, positive relationships arising through working together, and developing further. Experiences worthy of expansion.

This seems to be an important card to play, especially at the time of the “I’m reading because…” initiative, which is planned for next November and organised by the AIE, the Association of Publishers. The idea behind the “Company culture week”, which is also being discussed by the Culture Group of Confindustria, is that of creating a positive relationship between municipal libraries, company libraries and school libraries, an active virtuous circle for reading and participation. The libraries as a “public service”. And factories that are regarded as special locations in which culture is created, where people are productive and live together. The story retold in all good books.