He fell in love with cars at the age of seven, on board a Lancia Delta HF Integrale. Now Eugenio Amos – the Italian racing driver and car collector – has brought the iconic rally car up-to-date pledging to #makelanciagreatagain 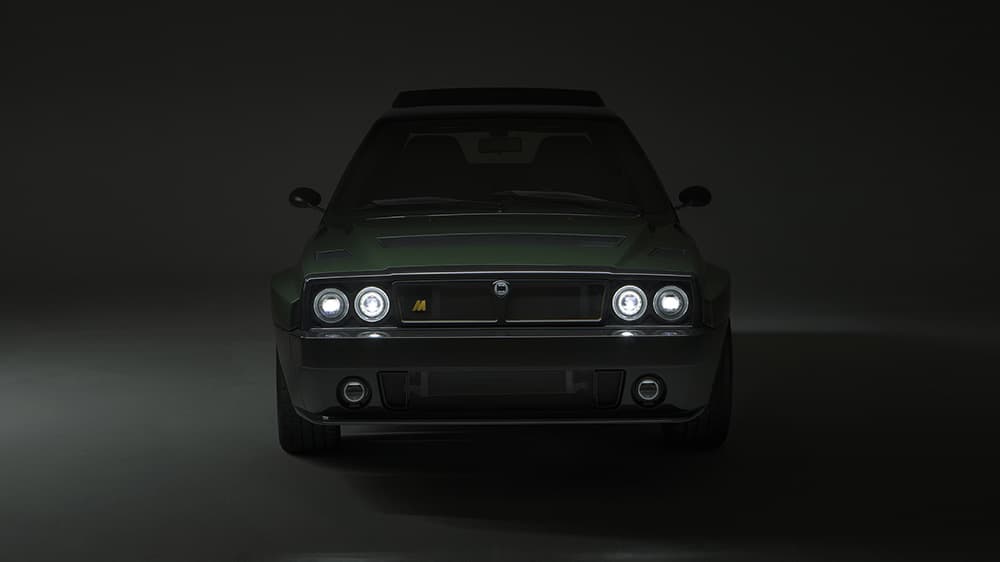 Bold, raw, aggressive – the list of adjectives could go on and on. The Automobili Amos Lancia Delta Futurista – a thoroughly reworked ver- sion of the 1980s Lancia Delta HF Integrale – is a plucky car that stirs the emotions. In other words, it has personality to spare.

It’s the product of a “romantic vision” that goes against the flow in a world that is “too sterile, fast and superficial”, according to its creator, Italian racing driver, car collector and now car maker, Eugenio Amos. “What the Futurista means is that I got fed up with the world of automobiles, as a customer first of all, and then as a manufacturer.”

By founding his own car company, Amos, 33, has turned his passion for automobiles into a career, with an approach to restoration in the manner of California’s Singer Vehicle Design, which turns out updates of the Porsche 911.

The Lancia Delta Integrale was a good place to start. The car won six consecutive World Rally Championships from 1987 to 1992 and is bound up with Amos’s childhood memories. “It was the car that made me fall in love with cars,” he says. “I was seven and my father drove a splendid Giallo Ginestra edition. I can still remember the sensations I felt back then, all the sounds and smells, the soft feel of the Alcantara seat fabric...”

Amos has been painstakingly trying to recreate those sensations with his Futurista remodel. “The ‘gestation period’ was three years, involving plenty of milestones, from the approval of the final project to driving the car for the first time,” he recalls. “It was almost like having a third son.”

Amos established his own company specifically to make the car, with the intention of bringing out new versions of other models at some time in the future. He says he relied primarily on two “very talented” suppliers: Borromeo de Silva in Milan for design and Podium Advanced Technologies, a consulting firm that took care of the technical aspects. The latter is based in Pont Saint Martin in Valle d’Aosta – as is Amos’s own company.

The result is a vehicle that has nearly sold out of its 20-car run already. Unveiled at the Grand Basel car show in September, the new road box – with its evocative 1980s-style charm – was a big hit right away, both in Italy and abroad. “It was the first year of the show and the organizers were interested in my car with its concept combining art and automotive design,” explains Amos.

What makes the Futurista so special? It has a new aluminium roof and bodysides that replace the two rear doors, while the bonnet, engine cover, bumpers, rear spoiler and hatch are all carbon-fibre.

The model has been updated to meet today’s performance standards, modernising numerous aspects of its hardware without changing them completely. The power from its 2-litre four-cylinder turbo engine has been increased from 210hp to 330hp, and the Futurista is more composed than the original car thanks to reinforcement of the chassis and gearshift and the overhauled transmission shaft and differentials. The front suspension sees a double quadrilateral in place of the original MacPherson, supported by outstanding Pirelli P Zero Tyres, with an optional Trofeo R.

“It’s practically invincible,” says Amos enthusiastically. Significant reduction of turbo lag, with power more evenly distributed even in the low range, makes the car more practical to drive. Top speed? “I haven’t tried it yet,” he says, “but it’s definitely higher than 240km/h.” But what really counts is the “very pleasant” driving experience, the car’s maker assures us. Amos has always loved speed and has spent many years on the racetrack. Starting with go-karts as a child, he went on to win the Lamborghini Super Trofeo in a Gallardo in 2011.

It may be his heritage as a racing driver that inspires the colour of his Futurista. A discrete racing green, this is the shade approved by the international sporting code for British race-cars. In addition to flattering the energetic lines of the Futurista and being an iconic colour, Amos reckons it’s perfect for everyday use. “It conveys both sportiness and elegance, without either of these two aspects prevailing over the other.”

Inside, in addition to sporty Alcantara seats, the car has a red start button with a missile symbol on it. There’s plenty of top-quality craftsmanship to appeal to car lovers, but what do fans of the original model think of it?

“About 5 per cent of the public was critical,” reports Amos. It seems that there is a minority of purists who loved the original car and would rather it live on in their memories alone. Yet the Futurista is a car that brings back into the limelight a brand and a model that would otherwise have been out of the frame, paying homage to the original.

“It’s intended for people between the ages of 30 and 50 who have experience of a Delta in their past – like me,” says Amos. “And for people who were only teenagers when the original car was around and couldn’t afford one. Well, now they can, in an updated version.” The update of the Delta was announced by Automobili Amos almost exclusively on Instagram, with the bold hashtag: #makelanciagreatagain. A clear statement of intent for a company that has brought a glorious model back to life in a way that is sure to win people over. From has-been to car of the moment, it’s a four-seater with buckets of character, capable of offering plenty of excitement even before it’s started up.

The man
who makes boats fly

Pirelli and Luna Rossa
bound for the America's Cup

Getting used to virtual life is only the...

Pirelli among the global leaders in the fight against climate change

For the second year in a row, the company...

Getting the show
on the road