The female model in Pirelli iconography

'Women and cars' is an important combination for Pirelli. Starting from magazines with Sofia Loren to the Pirelli Calendar

The female model in Pirelli iconography

When Sophia Loren appeared on the cover of Vado e Torno magazine in December 1963, her film Ieri, oggi, domani was about to be released in which she interpreted, among other roles, the legendary character of Adelina, who was always pregnant to stay out of jail. At the time, Sophia – Donna Sofia la smargiassa – was already a global icon of Italian beauty. 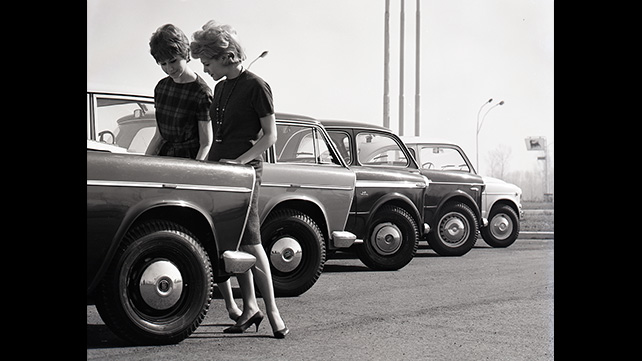 The Vado e Torno "truckers' monthly" – which Pirelli had invented the previous year, quickly taking advantage of the opportunity of a new area of readers that began and developed with Italy's great motorization –  had already dedicated its cover to other beautiful Italian film actresses of the day:  Monica Vitti of L’Eclisse for the month of April 1963; Claudia Cardinale, “The Leopard”, for December 1962; and the very young Stefania Sandrelli, who was filming Sedotta e Abbandonata in October 1963. Foreign actresses also appeared on the cover: Jane Fonda in April 1964, Brigitte Bardot in May, and Catherine Deneuve in July.
Of course, Vado e Torno was for truckers, an audience that was generally thought not to be impervious to "more accessible" feminine allure. Therefore, a few concessions had to be made in this sense. Between 1966 and 1969 the magazine included window stickers as a gift to decorate the side window of any proper truck. The cute blond posing with a tire as if it were a big game trophy incarnated the late sixties: she wore everything from a mini-dress with tall boots "in homage to Mary Quant" to work overalls as the dream tire repairer and even a chaste version of the bikini.
A new female model appeared in Pirelli iconography of the golden sixties, a time when the darkness of war had passed and the country had still not been hit by doubts and contradictions. This woman was more confident and wanted to let the world know it. The star system was on the cover, of course. But there was also the unknown model, posing before a novice photographer, convinced that she could give even a tire a soul. In 1962 Ugo Mulas took a series of photos dedicated to the "big names" of the time:  Cinturato, Sempione, and Rolle tires. There is a tire, of course. There is also a car, naturally. And then there is a woman – a new woman.  It is anything but the trite "women and cars" pair where the woman is a luxurious optional, like chromed fenders. In these photos, she is the serene, confident star. She smiles without looking straight at you, as if she was daydreaming, or she's attentively reading a book that could be an American novel. It is an example of the journey that the Pirelli "Cinturato" tire has made, from a tire for diehard car enthusiasts to a strong, safe travel companion for today's roads.
Gorgeous film stars on the magazine cover, stickers of pretty blonds in miniskirts to paste on the truck, and the smiling, radiant girls of the Cinturato tire: Pirelli's Swinging Sixties, female style, lacked the fourth and perhaps most important element – a Calendar. That photo of January 1964 – a solitary woman on a beach at dusk with the sea in the background – was the first page of a story about women that Pirelli is still writing.  Everything has been said and written about the Calendar: about how it has become a status symbol after being something to hand in the car mechanic's shop as it was intended (but is that really true?), how it now has sociological importance, and how it is at Buckingham Palace (but probably not hanging up somewhere). Sophia Loren is on the cover of the 2007 Pirelli Calendar, and so we return to the beginning: forty-four years later. Sometimes history repeats itself…

Art and aesthetics blend in The Cal™