A non-Inter supporter wonders about Javier Zanetti’s contribution to the history and aesthetic of the football game. Avoiding all sentimentalism and ignoring laudatory editorials, no ifs or buts – how will the workaholic footballer be remembered? 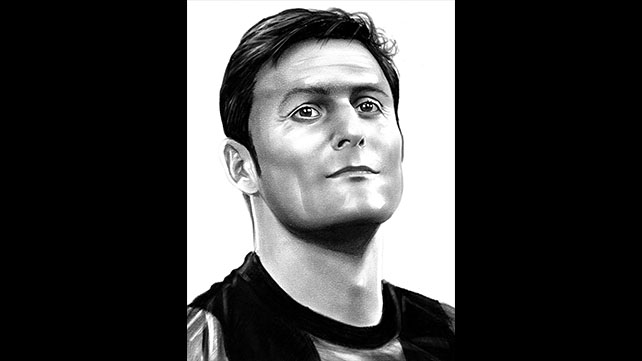 The players who succeed better than others at demolishing the steel doors of time, which are the same ones of oblivion, are those who are capable of unique actions, ones that cannot be transferred to other bodies or other contexts (because the context also matters).

I must point out that, as I write, I am not writing as a supporter. As is only right with the passing years, my “extreme support” has waned and been watered down into a pure passion for football, a passion that drives me to appreciate the action rather than the jersey, always. Anyway, what does strong mean? Why is a player remembered? My point-blank thought is: for being extraordinary, from the Latin extraordinarius, out of the ordinary, beyond the norm. The players who succeed better than others at demolishing the steel doors of time, which are the same ones of oblivion, are those who are capable of unique actions, ones that cannot be transferred to other bodies or other contexts (because the context also matters). Maradona is one of these and like him there is perhaps only Ronaldo. Pelé is one as too Cruyff and Zidane. There is Totti and there are Del Piero, Beckham, Owen, Maldini, Thuram, Cannavaro, Buffon, Rivaldo, Figo, Messi, Cristiano Ronaldo, Ibrahimovic, Riquelme, Henry, Bergkamp, Mancini and many, many more. Some of these are banners. All should receive, in memoriam or at the time of retirement, flower-strewn walkways and celebratory epic poems.  The first Italian videoed interview with Javier Zanetti was on the day of his presentation at the Terrazza Martini in Milan, Piazza Diaz, in an old city centre part Risorgimento part Fascist. It is a poor interview, the journalist’s fault, and somewhat absurd. The journalist does not appear and Javier is wearing a double-breasted suit purchased in Lanús and a blue tie embroidered with racehorses. They both speak in Spanish and Zanetti says he has not yet talked to anyone in the team, not even the coach Bianchi. He says that by being humble they can achieve good results and that he is proud to be at Inter. The journalist asks him what part of Italy his great-grandparents came from, since Zanetti has Italian roots. He says he does not know and he never met them. The journalist asks him if he has never talked to his parents about his origins. Does he not even know whether they came from the north, centre or south of Italy? Zanetti says no. The journalist presses him and says that Zanetti is a norther Italian surname. He says look I really do not know. Then he asks: are you from Buenos Aires? Yes. City or province? Avellaneda. Oh, Avellaneda. Yes. Independiente? Yes, I am from Independiente. Is that where you started your career? Yes, there. Good, thank you.
Javier Zanetti played for Independiente (in the youth team) between 1982 and 1989 and then his parents were told: Zanetti is too thin, we’re sorry but he will never be a footballer. He went back to working as a bricklayer helping his father, beefed up a bit and two years later returned to football, having been taken on by Talleres where he made his professional debut in 1992. He then went to first-division Banfield and scored 10 on his report card. Two years later he was at Inter, in a beige double-breasted suit looking timid and bored. A few days after his arrival the Corriere della Sera newspaper was already writing: "Zanetti has shown that he is head and shoulders above everybody else in terms of athletic fitness.", although it then took a step back saying: "No comparison – with the past and even less with Brehme but great dynamism at the service of the team." His athletic fitness and tireless running was, from the outset, Javier Zanetti’s most distinctive trait. The latter one was noted a year later, in an article dated November 1996 again in the Corriere della Sera, saying: "One of his greatest drawbacks is that he is an incorrigible holder of the ball.” But in that game, Inter-Verona November 1996, Zanetti scored his third goal in eight games and an Inter coached not by Bianchi but by Hodgson was at the top. They were to be his only three goals of that season and combined with the two from the previous championship make five. In all the 19 championships played for Inter, they form nearly 40% of his goals, which today still sit at 12. He played in the 1997 UEFA Cup but they lost against Shalke 04. He won it the following year against Lazio, scoring perhaps the finest goal of his career, a volley from outside the box which saw the ball rise and dip under the cross-bar. Of that night, however, history will recall the step-over dribbling by a 20-year-old Ronaldo just arrived from Barcelona that drove Marchegiani crazy and ended up in an open goal.  After that, Javier Zanetti lived through what was probably the darkest period in all Inter’s history, a time when it became the banner of endless defeats. In 1998, the darkest year of the darkest period, that of Marcello Lippi, he became captain for the first time.

Inter’s gloom was a necessary condition for Zanetti’s light to shine. He was seen by all the supporters and most spectators as a "real man" and a "banner ", two very 20th-century expressions used less and less, and perhaps destined to disappear.

Zanetti was the only one to stay when all the others left. Should those who went be criticised? I don't think so. Should he who remained be applauded? Perhaps but I don't think this either. In the football world, “In good times and bad” is a counter-productive concept if the times you are living through are always bad. Ronaldo who managed to win the UEFA cup, became top-scorer and earn a return to the Champions League left after five years in 2002 and won nothing more. In the years when Moratti was president Inter witnessed an impressive transfer of talent to its teams but none really stayed, no one like Zanetti.
Javier Zanetti stayed and, without any great classy shots but simply with consistency, hard work and an attachment to the team, earned the main credits in Inter history. Most importantly based on the statistics: he is the foreigner with the most appearances in Serie A; the player with the most appearances in Inter history; the player with the most wins in Inter history and one of the 19 players in the history of football to have played at least 1000 matches.
Javier Zanetti’s other career, parallel to his Inter one and also packed with records, was in the Argentinian national team. His debut was made along with Daniel Passarella’s as coach, in 1994 against Chile, in a match won by Selecciòn 3-0 and in which the first goal, and this is a fascinating fact albeit of scarce importance, was scored by Rambert El Avioncito.

In the national team, too, Zanetti was a regular member, point of reference and captain in the darkest period of the team’s history, not having won a single title since 1993.  Standing out amongst the dozens of records, thousands of games played and mass of numbers that defined Pupi Zanetti’s career as one of the most long-running in footballing history is the void surrounded by the black outline of one number: zero. It may be just one zero but it is one of the zeros that takes me back to the focal point of every footballer’s career: what is the memory? What actions drive you towards immortality. He was put forward for Footballer of the Year zero times. Never, not even once, not after 2010, not after winning the Champions League as captain – a captain who, five minutes before the referee blew the whistle to end Inter-Bayern Munich in Madrid, was crying, sobbing, as he played, ran, passed and headed. He dried his tears to stop them blocking his view, a humanly powerful image and perfect for the sentimental gallery of supporters and the sentimental gallery of the club. There are perfect anecdotes on his devotion more than commitment to training sessions. Some describe Javier, after stepping up to the altar on their wedding day and before the reception, asking his wife Paula whether she minded if he went for a short run. Javier who, while holidaying in Tunisian hotel with no gym, did push-ups on the beach with Paula plus a few kilogrammes of books on his shoulders to comply to the gram with the holiday homework set by his Inter sports trainers.  Zanetti, the man who stayed on when all the others were leaving; the one who was never injured and always trained; the one who even put the philosophy of humility and hard work on the cover of his autobiography (Play like a Man). The book should now be included in a hall of fame. He chose the humblest of footballing gifts, one that footballing greats do not possess; indeed, one that they often shun because far too normal and too human. He took running to the nth level. Perhaps he was never a candidate for European Footballer of the Year because it rewards an extraordinariness that has little to do with training and more the feel for a goal and inventive dribbling, that great artistic elegance that Javier Zanetti never possessed. He created his own and ran more than everyone in the history of Inter and Argentinian football, although it is a history that he did not write with his game or with his own unequivocal, distinctive and decisive sign. His place in history will not be alongside the Beckhams, the Zidanes, the Riveras, the Maradonas, the Pirlos and so on. It will be a place where he stands alone, the man of longevity, the man who at the age of 40 had the stamina of a 20-year-old. It cannot be easy, not being gifted with that sheer talent that makes the privileged few so easily immortal but managing to forge such a strong image of yourself and your path. It cannot be easy but somehow Zanetti managed to do it.

life
MOST READ
Pirelli and Inter Campus
together in New York

We’ll all become mangroves in the OMO society

Getting used to virtual life is only the...