Rich, multiform art with a voice at Pirelli HangarBicocca until 15 September. A voyage of colours and materials brings Gowda's India to Milan

Remains, the first major solo show in Italy by Indian artist Sheela Gowda, curated by Nuria Enguita and Lucia Aspesi, will occupy the spaces in the imposing Pirelli HangarBicocca from 3 April to 15 September 2019.

The artist created two new productions for the Remains exhibition in Milan, exhibited along with a vast selection of works created since 1992, including material installations, site-specific sculptures and a series of prints and watercolours on paper. In the first new work, Tree Line (2019), countless thin strips of raw natural rubber – supplied by Pirelli's CCM Research and Development technology centre – are interwoven to create a linear surface like a geometric weave. In the second work, In Pursuit of (2019), the artist uses a material that appears frequently in her work, human hair, hung on the walls of the Cube to form two big black shapes that interact with the architecture of the space. 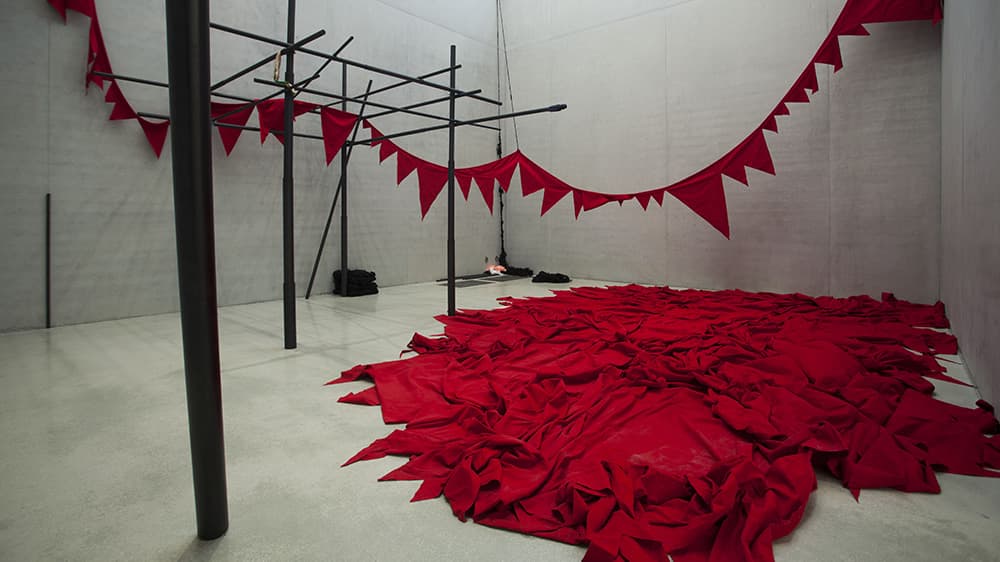 Materials, the poetics of place, personal roots: these are the key themes around which Sheela Gowda's work takes form. Born in 1957 in Bhadravati Karnataka, India, the artist now lives and works in Bangalore, and has always stood out in the debate surrounding contemporary art for her intense dialogue and exchange between local artistic traditions and international forms of art. This aptitude was supported by her studies in painting at Ken School of Art, M.S. University in Baroda and Visva-Bharati University in Santiniketan, where she developed a contemporary reinterpretation of Indian classical art with a special focus on popular imagery and craft techniques. But it was upon her return to India after attending the Royal College of Art in London that Gowda gave up painting in favour of the three-dimensional space of sculpture, in which she works with her energetic femininity influenced by a strong sense of belonging.

Sheela Gowda is now considered one of India's greatest contemporary artists because of the original she speaks of her homeland through art.

The artist’s creative process is more like a spiritual rite in discovery of symbols and roots than the ordinary process of producing an artwork: there is something primitive and mystical about her creations that suggests a liturgical dimension. The Indian artist has sniffed, touched, walked on, observed and spoken in search of her art. Her artistic endeavour over the past twenty years or so has led her to appropriate knowledge, cross roads, observe habits, sniff spices, grasp objects and meet people, reproducing all this experience in a form expressing a meaning halfway between final and temporary. Gowda sees art as a matter of perspective, of assessment, not as a matter of themes or social change: art is about exploring a language that grants us access to a superior philosophy and aesthetic.

In her work Gowda frequently makes use of objects and substances we use in everyday life that have highly metaphorical or political connotations, seeking not to abuse them or distort their origins, in response to the changes in Indian society that took place in the ‘80s and ‘90s. She incorporates ash, natural powders, pigments, wood, rocks, fabric, brushwood and human hair, even using cow dung, considered sacred in India because of its many uses. This organic material, frequently present in the artist’s work, as for example in Mortar Line, may appear exotic to western eyes but is very common in India, where it is used as both building material and fuel. And so the long black ropes of hair exhibited in the new work In Pursuit of recalls the Indian custom of using human hair to invoke divinities and the pigment in which they are dipped for religious rites. Ropes of hair are even used as talismans in Indian cars, and represent an important source of income on the world market for human hair.

In addition to organic and reclaimed materials, such as the barrels used to shelter workers in Kagebangara and Darkroom and the blocks of granite used to grind spices in Stopover, the artist makes use of industrial materials. Her sculptures relate to the space around them, blending material with context through constant manipulation. Every object, waste or substance present in Sheela Gowda’s works speaks of a land packed with history and ritualism, and finds its aesthetic and interior match in the monumental space of Pirelli HangarBicocca.